Bet on a sniper: Nigmatullina took tenth place in the individual race at the Biathlon World Cup stage

Russian biathletes did not show themselves in the best way in the individual race at the World Cup stage in Anterselva. Only Ulyana Nigmatullina performed well, finishing the top ten with two penalties, almost three minutes behind the winner Justine Brezat-Bouchet. Her compatriots Valeria Vasnetsova and Irina Kazakevich did not close 13 targets for two and did not even get into the top 60. 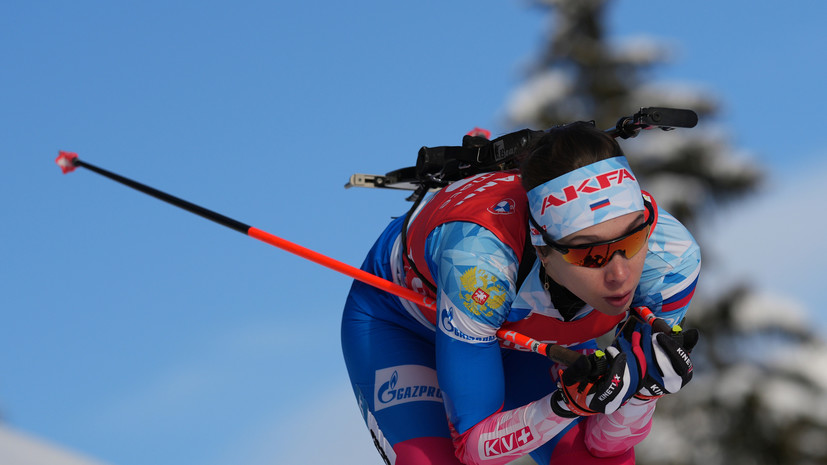 The last stage of the World Cup in Anterselva before the Olympic Games began more than successfully for the Russian team.

Unfortunately, it turned out to be difficult for women to count on medals in a similar start.

Firstly, it was decided to give rest to the leader of the national team Kristina Reztsova.

In addition to her, there was no one to fight for high places.

Also, the coaching staff took care of Svetlana Mironova and Anastasia Shevchenko, who, in addition, did not fully recover from a hip injury.

Fans pinned their main hopes on the latter.

A native of Udmurtia, although she cannot boast of a fast move, she is famous for her accurate shooting, which is especially important in this discipline.

In the first individual of the season in Östersund, she even finished fifth, and therefore kept working chances to win the Small Crystal Globe.

Unfortunately, the race showed the functional unpreparedness of this part of the team for the Olympic Games. As expected, only Nigmatullina looked decent. Uliana, by tradition, did not boast of good speed, but on the lines she made only two misses in total, which, with a sufficiently strong wind, was an excellent result. The athlete made a misfire on the prone and standing, and this was enough to close the top ten with a delay of almost three minutes from the winner Justine Brezat-Boucher. I was also pleased that the Russian woman kept her strength on the last lap and kept the tenth line. This result allows her to count on getting into the mass start.

But her two compatriots did not give reasons for optimism.

Vasnetsova and Kazakevich were not able to fight with the strongest rivals, neither in terms of speed of passing the distance, nor in shooting.

Valeria looked a little better and lost a minute and 18 seconds to Breza-Boucher.

However, seven missed targets prevented her from climbing even into the top 60.

On the racks, the 24-year-old athlete made five mistakes at all.

And the final gap from the leader of almost seven minutes is frankly frightening.

Finally, Kazakevich disappointed more than the others.

The young biathlete has long taught the fans that she is able to experience problems at the borders, but in terms of speed she is second only to Reztsova in the national team.

And climbing up 21 positions in the pursuit compared to the sprint in Ruhpolding gave hope that the girl was able to shoot accurately even in races with four stages.

Alas, in Anterselva all the previous problems returned to her: six misfires, five of which were “-” on the rack.

The reasons for such a modest performance lie in a weak physical form.

It is no coincidence that Irina lost more than two minutes to Breza-Boucher and ended up in the 67th position in the final protocol.

If on Thursday the holiday came on the street of the Russians, then on Friday - the French.

They showed a good readiness for the Olympics and, unlike Mikhail Shashilov's wards, they coped with both the move and the shooting.

Of course, first of all, this concerns the experienced Breza-Boucher, who, having made only one misfire, left no chance for her opponents.

Right behind her was Julie Simon.

Throughout the individual, she also claimed victory, but a miss in the last standing prevented her from throwing the gauntlet to her compatriot.

But in the third position unexpectedly settled down Mona Brorsson.

Many strong Swedes miss the stage, in particular, the sisters Hanna and Elvira Oeberg.

However, their teammate stood up for the whole team.

And if not for the misfires at the last two lines, I could have risen even higher.

The Norwegians, on the contrary, were not very successful.

Unlike men, they failed to surprise with their shape.

Shooting let down the Scandinavians.

The current owner of the Big Crystal Globe Tiril Eckhoff did not close four targets at once and remained 11th.

The rest didn't even make the top 20.

And the leader of the overall standings of the Planet Cup Morte Olsbu Røiseland misses the stage.

In her absence, the Small Crystal Globe went to Marketa Davidova.

In Östersund, the Czech won, and in Anterselva she showed the sixth result.

This was enough to keep the lead and get ahead of the closest pursuer Lisa Teresa Hauser by 12 points.