“We all tend to joke unsuccessfully”: in Russia, the creativity of CSKA was not appreciated during the presentation of Yazici

CSKA Moscow unsuccessfully presented the team's newcomer Yusuf Yazici. The club posted a video in which it lures a Turk into the country with the phrase: “This is from Russia. We have a lot of Natasha.” The joke was not appreciated by representatives of the football community and many celebrities. The video was quickly removed, and CSKA TV editor-in-chief Katerina Kirilcheva apologized for the inappropriate content. According to the director of public relations and information policy of the army, Sergei Aksyonov, the employees responsible for this incident have already been suspended from work. 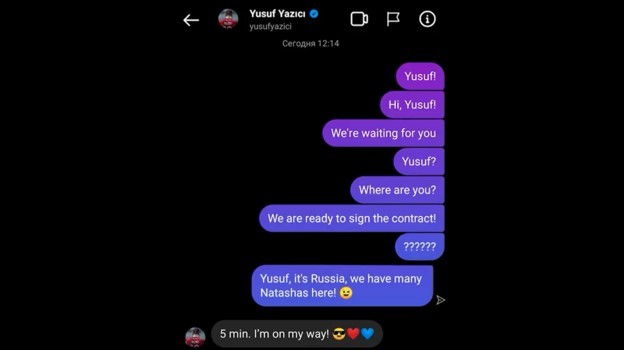 The capital club in honor of this event prepared an ambiguous video on Instagram.

It shows how the negotiations with the player allegedly took place.

The football player did not respond to the messages of the army until they made a "knight's move" and sent a message with the following content: "Yusuf, this is from Russia.

We have a lot of Natasha.”

"Women should start a riot"

Such creativity did not find understanding among Russian fans, football functionaries and well-known representatives of the fair sex.

TV presenter Victoria Bonya told Sport-Express that after this, women need to revolt and not allow men to treat them like that.

“This is an indicator of how Russian men see our women.

These people devalued all the girls a long time ago, rolled them up with asphalt and are ready to offer them to everyone like a carrot.

I would like to say that women should make a riot! ”, - said Bonya.

Was surprised to see the video of CSKA, and producer Yana Rudkovskaya.

She admitted that she would never have approved such a scenario.

“As a person who creates, invents and orders a lot of content, I would never order, approve and publish such a video.

In CSKA, there should have been some kind of discussion of this work, a focus group.

Did they all vote for this?

Maybe we are from the same planet and they are from another?

What is it anyway?

It seems that in our country women are not valued at all, as if women are a commodity, ”Match TV quoted Rudkovskaya as saying.

According to her, thanks to the video of the press service, not only football fans have now learned about the newcomer.

“I do not consider this joke offensive to Russian women, I do not think that they should be offended by it.

Many Russian girls in Turkey are called Natasha, it happened that way.

It has already become traditional, in many respects it is because of the Russian girls who created such an image for themselves there.

Not even Russian, but Ukrainian girls.

If any Russian girl comes there, she will be called that.

And they also called me Natasha there, it's okay.

CSKA held a successful action, now many have recognized the name of their newcomer, not only fans, but also people who are not involved in football, ”Zhurova said in an interview with RBC-Sport.

“We all tend to joke badly”

Did not support the idea of ​​the army and the male representatives.

"A lot of Natasha"... this is unprofessional and very stupid.

I understand that this is about my favorite club, but someone screwed up ... I understand this joke, but it's just not entirely appropriate in the context of the transfer of a Turkish football player.

After all, he doesn't come to Moscow to see Natasha and other Russian girls... Well, okay, in general, a bad joke.

We all tend to joke badly.

TV journalist and commentator Ilya Kazakov, in turn, noted that this is not the first time CSKA has crossed the line.

“CSKA fans seem to have recently been outraged by a video where a tiktoker in a club uniform on the stadium field “performed twerk and imitated penis stimulation with her hand.”

The club heard them, there was a statement with the words "CSKA regrets what happened and will do everything possible to exclude such incidents in the future."

And here again on the same rake, ”Kazakov wrote in his Telegram channel.

The Russian Football Union also reacted to the video.

The head of the ethics committee of the organization, Semyon Andreev, said that he was ready to consider the scandalous publication if an appeal was received.

“A very stupid and offensive video about our girls and women, it can’t even be called a joke.

Some kind of promiscuity (on the part of CSKA).

If an appeal is received, the ethics committee will analyze this publication, ”the official said in an interview with Match TV.

Football "Spartak" also could not help but take the opportunity and joked about the competitor's unsuccessful video.

The red-whites posted a post on Twitter with a photo of a cheerful and sad football player and the caption: “An ordinary good day / Stumbled upon a twitter of a Moscow team.”

Usual good day / Stumbled upon a twitter of one Moscow team pic.twitter.com/aCSKwvHA4r

The reaction to the unfortunate joke from the outside followed almost instantly.

After about half an hour, the video was deleted, and instead an official appeal from the editor-in-chief of CSKA TV, Katerina Kirilcheva, appeared.

She apologized for the video, which was released by the media group.

“A completely different scenario was originally planned and approved, but without the presence of the player it could not be realized.

In the conditions of lack of time, I came up with such a plot, which turned out to be unsuccessful and inappropriate, and for many more offensive, ”wrote Kirilcheva.

In addition, the director of public relations and information policy of CSKA Sergei Aksyonov said that all those responsible for the incident were suspended from work.

“There is nothing to discuss here.

Such things should not appear on official resources.

The persons responsible for this incident have been suspended from work, ”Sport-Express quotes him as saying.

According to the Pervosportivny Telegram channel, due to the scandalous presentation, the head of the SMM department of the army team, Evgeny Mihutov, will leave the club in the near future.

At the same time, CSKA President Evgeny Giner told RIA Novosti that he was not aware of the situation.