With Tsvetkov and Serokhvostov at the base and Burtasova in reserve: what is remarkable about the composition of the Russian biathlon team at the Olympic Games

The Russian Biathlon Union announced the composition of the national team for the Olympic Games in Beijing. In addition to the ten main athletes, the names of four substitutes were named, who can come to the rescue in case of force majeure. In men, the right to represent the national team was achieved by Maxim Tsvetkov, who did not play at the World Cup for two years, but showed himself well in the last stages, and Daniil Serokhvostov, who did not initially qualify. There were no surprises for women, and Evgenia Burtasova and Anastasia Shevchenko received the status of substitutes, who clearly showed themselves in the IBU Cup. 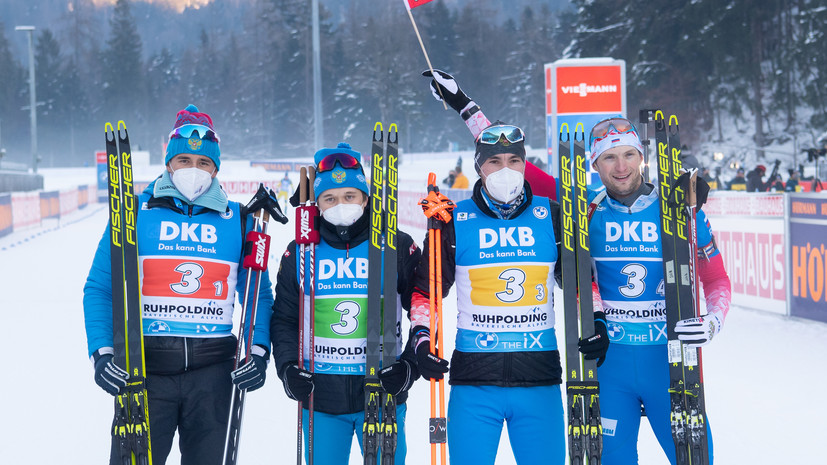 “The best biathletes of the country will go to Beijing”

The composition of the Russian biathlon team for the upcoming Olympic Games was largely read in advance.

Neither women nor men managed to win the maximum quota of six people, and therefore the coaching staff had to determine five athletes each who would go to China.

There was practically no doubt among the men that Alexander Loginov and Eduard Latypov, who are stable this season, as well as young Daniil Serokhvostov and Said Karimulla Khalili, will get a place in the team.

There was a high probability that Maxim Tsvetkov, who 100% took advantage of his chance at the January stages of the World Cup, would join them.

In particular, he, as a finisher, helped the team take first place in the relay in Ruhpolding.

Another veteran of the national team, Anton Babikov, after a successful performance in Oberhof, on the contrary, failed in Ruhpolding and lowered his chances of a trip to Beijing.

Women had no intrigue at all.

It was very unlikely to bet on girls who proved themselves in the IBU Cup, for example, Anastasia Shevchenko or Evgenia Burtasova.

As a result, the line-up announcement was completely without surprises.

Men will be represented at the Olympic Games by the above five.

At the same time, Babikov and Alexander Povarnitsyn were on the list of substitutes.

For women, in case of health problems with the main biathletes, Shevchenko and Burtasova can go to the Celestial Empire.

The appearance of four reservists at once is quite understandable in the midst of the coronavirus pandemic and will help the coaching staff to play it safe in case of positive tests.

President of the Russian Biathlon Union Viktor Maigurov stressed that substitutions are possible only for medical reasons.

“The mechanism is clear: the spares stay in Russia, continue the season, do not fly to Beijing.

We must present arguments, evidence of the impossibility of the participation of athletes in order to make a replacement.

The regulation provides for this, ”the functionary emphasized.

The head of the Russian Olympic Committee, Stanislav Pozdnyakov, fully agreed with the choice made: “We watched the recent competitions with great enthusiasm.

Athletes looked good at the last stage of the World Cup, no candidacy raises questions.

There was unanimity in the SBR.

We will have the best biathletes in the country in Beijing.”

Maigurov separately explained why they decided to include the young Serokhvostov, who made his debut at the KM only this season, and Tsvetkov, who had not thought about getting into the first team a few months ago.

“Many athletes, I think, even before the stage in Ruhpolding confirmed their right to be in the team. Tsvetkov was not originally in the squad, but then he progressed and jumped on the bandwagon of the outgoing train, proving his right to participate in the Games. Serokhvostov unconditionally won this right. It shows stable shooting and speed, did not let me down. Yes, we failed to win the sixth quota, but we fought the Germans and the Swedes. It didn’t work out a bit, I want to apologize to the fans, ”said the President of the RBU.

Getting into the composition of Tsvetkov is really impressive, because many were quick to write off the world champion in the relay in 2017. Before the stages in Oberhof and Ruhpolding, he did not compete at the KM for two years and could not even break into the second team. This season, Maxim needed one IBU Cup entry to get a chance to return to the elite. And the 30-year-old biathlete took advantage of it. First, he helped the national team to a long-awaited victory in the relay, and then took ninth place in the pursuit.

Serokhvostov not only proved himself worthy in personal races, but also, together with Khalili, became an indispensable member of the relay four.

With him in the composition, she won bronze in Östersund and Hochfilzen, and then gold in Ruhpolding.

It is curious that in November Daniil did not qualify for the first team and got into it only due to the lack of qualifying points from Povarnitsyn.

However, the young athlete immediately showed himself and entrenched himself in the team.

As for one of the leaders of the national team, Latypov, he missed the German stages due to positive tests for coronavirus.

However, according to Maigurov, on January 20, Eduard will be released from quarantine and will take part in the last KM stage before the Olympics in Anterselva (Antholz).

“Today we cannot say how this will affect.

He continues to train, but the load is reduced.

His condition is monitored daily, it is stable, there are no problems.

We plan his participation in one or two races," the head of the RRF stressed.

As for women, they had even fewer questions about the composition.

Young Shevchenko went only to Ruhpolding, but at the last moment failed to prove her right to travel to China.

Back in November, few doubted that Larisa Kuklina would go to Beijing as one of the leaders of the team, but she could not properly prepare for the season and is still content with racing in the IBU Cup.

The same can be said about Evgeny Garanichev and Matvey Eliseev.

At the same time, Maigurov once again emphasized that, contrary to rumors, the SBR does not plan to dismiss the head coach of the women's team Mikhail Shashilov: “Someone needs hype to be read, quoted, but this is today's reality.

We have no questions about it, changes in the coaching staff can only be made in the spring, it all depends on many factors.

Everything is calm, stable - the team moved to Italy.

On January 20-23, domestic biathletes will perform at the KM stage in Anterselva, and some may miss it.

And on the 26th, the team will fly to Beijing to have enough time to adapt.

This also applies to difficult tracks.

“Changes along the route are unlikely.

Maybe there will be additional barriers at the shooting ranges.

The track, by the way, is similar to the one in Antholz - not very steep climbs with many turns, where there will be no time to rest.

But the harder it is for us, the better.

All coaches know what awaits them, they spent a lot of classes at such a height and with such a wind load, ”Maygurov summed up.

“This is a coaching decision, but Babikov would have been preferable”

The experts were generally calm about the choice of the coaching staff for the Olympic squad.

However, some found cause for criticism.

For example, two-time Olympic champion Dmitry Vasilyev expressed the opinion that Babikov should have been added to the team.

“The good news is that the spares have been included.

Given the windy shooting range in Beijing, shooters should be preferred.

Babikov is a reliable shooter.

Of course, this is a coaching decision, but Anton would be preferable, ”Championship Vasiliev quotes.

As for women, he lamented that some strong girls were never given the opportunity to prove themselves at the KM.

“Thus, already in December, we predetermined the team that will go to the Olympics.

Shevchenko and Burtasova could not show themselves, ”added Vasiliev.

The ex-president of the RBU, Vladimir Drachev, on the contrary, called the composition expected and did not dispute the choice of mentors.

The only thing, in his opinion, was to try Burtasov in the case.

“They didn’t test her, although she can really take medals - she leaves with a gold medal from every European Championship.

She has much more chances to help win something than the same Vasnetsova.

Maybe she won’t even run, and the potential is several times lower than that of Burtasova.

As for Babikov, he does not get into the pursuit.

In individual races - four minutes on the move.

Even if with zero, it will not get into the top ten.

In my opinion, everything was done logically and competently, ”explained Drachev.

In turn, the three-time Olympic champion Anfisa Reztsova was glad that Babikov was included at least in the number of spares.

“He is a very good athlete.

There is time to step up.

I'm glad he got there.

According to Latypov, there are doubts about how he will feel after all the troubles with the coronavirus.

He needs starts before the Olympics.

The team is good.

It’s hard to talk about gold, but the guys can personally try to win and cut themselves in relay races, ”Suggested Reztsova.

She set the task for her daughter, Kristina, to take bronze in the individual race.

It should be by the next Olympics, ”added Reztsova Sr.