Novak Djokovic's entry into Australia has stirred emotions. This also applies to the country's journalists. We got proof of that on Tuesday, when two TV profiles talked shit about him - something that was widely spread. - Novak Djokovic is a lying, insidious asshole, says Rebecca Maddern. 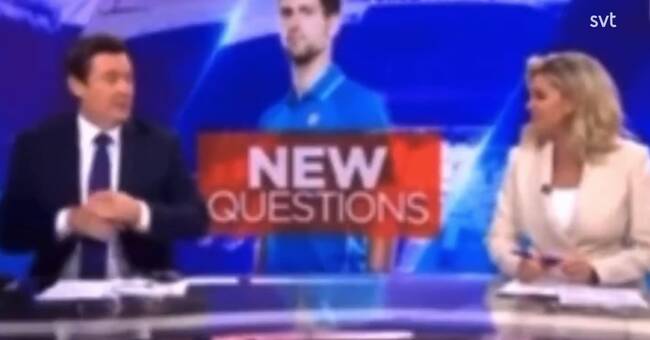 Hardly any person interested in tennis has missed the soup around Novak Djokovic's being or not being in Australia.

On Monday, the news came that despite the border guards at Melbourne Airport deciding to withdraw the Serbian world setter's visa, he was still allowed to stay in the country.

The decision was made by a judge, after the court proceedings showed that the decision to withdraw Djokovic's visa came before he had enough time to contact other people.

But even before the decision to let Djokovic stay, there were outraged feelings in Australia, which is one of the countries that has had the strictest corona restrictions in recent years.

And the emotions have become even more upset in recent days, when, among other things, information has been spread that Djokovic was moving around among people, without mouth guards and distance - the day after he tested positive for covid-19.

It was seen not least on the channel Channel 7. On Tuesday, a clip was spread that showed when their presenters Mike Amor and Rebecca Maddern spoke negatively about Djokovic in the studio.

Their talk was leaked and has spread widely on the internet.

- No matter how you look at it, Novak Djokovic is a lying, insidious asshole, says Maddern, and continued a little later:

- To go out when you know you are covid-positive ... Well ... I do not even think he was, she said, referring to the information that during the day claimed that his covid results should be falsified.

Nor does Madden's colleague Mike Amor seem to appreciate Djokvic at the moment.

- I think he will get away with it.

I think most sensible people would say that "The guy is an asshole".