"The task is to fight for awards": the composition of the Russian national skiing team for the Olympic Games in Beijing has been determined

The Cross-Country Skiing Federation of Russia has announced the composition for the Olympic Games-2022. There was no place in the team for sprinter Gleb Retivykh, who repeatedly fought for medals at the World Cup stages. He lost the fight to the reigning world champion among juniors Alexander Terentyev. Yana Kirpichenko, the medalist of the last year's world championship, will not go to Beijing. According to the head of the FLGR Elena Vyalbe, the athlete has recently been in poor physical shape. Experts noted that there were no surprises and everyone who deserved it will go to China. 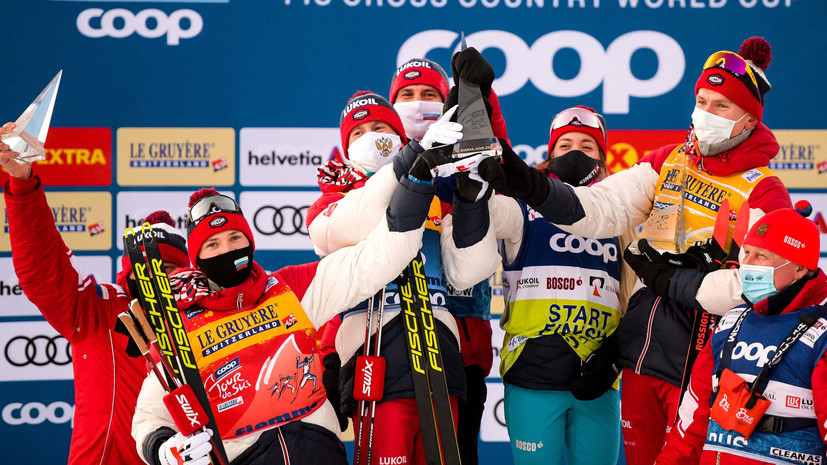 The Russian national cross-country skiing team on Tuesday announced the composition for the Olympic Games in Beijing.

Although the competition only begins on February 5, there was no point in postponing this decision for the coaching staff, since after the Tour de Ski the World Cup stages in France and Slovenia were canceled.

Thus, there are no more races left to test the fitness of certain athletes.

Zealous lost the competition to Terentyev

There were no big surprises in the men's team.

However, this became known a few days ago.

As the president of the Russian Cross-Country Skiing Federation Elena Vyalbe noted, it turned out to be the most difficult for pure sprinters to get into the national team.

“Gleb did not qualify for the Olympic Games.

He initially knew that it would be very difficult for the sprinter, they had the highest selection criterion, "- quotes the TASS functionary.

Zeal's results this season were much more modest than expected.

Only once did the athlete manage to climb the podium after the team sprint in Dresden.

In other races, the Russian has never been able to make it to the final of the competition.

The athlete himself after the "Tour de Ski" explained the unsuccessful performance by the wrong summer preparation for the season.

According to the Zetivykh, the group of Markus Kramer, in which he trained, received too much workload and did not have time to recover by the start of the CM.

“This year is not at all the same condition.

In Dresden, I began to move away from the summer load, to feel the speed.

See for yourself how our team, Kramer's group, is performing, with the exception of Seryoga Ustyugov ... I know the essence of the problem - our group needs time to digest the load, "the skier said in an interview with Match TV.

Olympic champion Alexander Legkov was upset because the Zealous did not get into the squad.

I wanted him to go, because time goes by age.

But the rest is not for me to decide, there is the president of the federation and the formation of the team.

I have a good relationship with Gleb.

He most likely believed to the last, since there were still sprint distances, although not qualifying ones.

And they were all canceled due to the coronavirus.

Among the other guys we have station wagons - Bolshunov, Ustyugov, Terentyev, who run both sprint and distance distances, "Legkov said in an interview with Sport-Express.

The place of the Zealous in the team was taken by Terentyev, who won the first stage of the KM in the Finnish Hand.

However, during the stage race, he looked very good, taking second place in the final mass start, and deservedly became the fourth in the overall standings.

“It's good that Denis proved his class at the Tour de Ski.

After the KM stage in Davos, he was promoted to the squad, but with the last number, and at the stage race he showed himself in full glory, showed what he was capable of, ”the specialist noted.

In turn, the silver medalist of the Olympic Games-2010 Alexander Panzhinsky positively assessed the composition of the men's team.

In his opinion, such a choice was expected during the season.

“Each of the eight guys can show good results in Beijing.

These are skiers who have shown good results from the first stages of KM.

Of those who tried to break through and failed, this is Andrey Melnichenko.

And so, except for Ustyugov, everyone was a participant in the Tour de Ski, "said Panzhinsky.

The women's eight for the Games is as follows: Yulia Stupak, Veronica Stepanova.

As Vyalbe explained, she now looks bad on the track.

“Istomina and Matsokina were included in the roster by the decision of the coaching staff.

As for Yana, she had the opportunity to compete with Vasilyeva in a confrontation, we discussed her candidacy with the coaches, we were even ready to take into account the race that was not in the selection criteria, but the athlete looks really bad, ”the head of the FLGR admitted.

If the composition of the men's team looks more even, then four leaders stand out in the women's team: Stupak, Sorina, Nepryaeva and Stepanova.

Therefore, according to Panzhinsky, there is a possibility that one of the eight girls will be in the role of a substitute and will not go to the start in Beijing.

“Everything is not so stable for them.

There are four leaders.

And the rest have not yet been able to perform brightly.

But I'm sure they will help the team.

Each will have a wonderful experience of performing at the Olympics.

I hope they will have a chance to go to the start, after all, four people are allowed in each race.

There is a possibility that some of the girls will go to the Games as a substitute and will not come to the start, ”the Olympic champion said.

Interestingly, Stepanova, who this season won gold medals in the relay at the KM stage in Lillehammer, Norway, did not believe in the possibility of a trip to Beijing in the summer.

“Being selected to compete in the Olympics is an incredible feeling.

Even in the summer I did not believe it - just in the photo is the moment when I first thought about the Olympics seriously.

Thanks to the coaches and not only to them - to everyone who led, tuned in and helped.

Thanks to all the guys and girls in the team - we have an individual sport, but in training we try to help each other!

Thanks to my dear Kamchatka for all the help and support!

Thank you Vyalba for your trust!

I promise to show everything I can on the Beijing ski track, ”the girl wrote.

Combat strength, but there may be training problems

The composition of the national team was highly appreciated by the vice-president of the FLGR Sergey Kryanin.

In his opinion, skiers who will go to the Olympics are ready to fight for gold medals.

“There is someone stronger, someone weaker.

The decision of who will run will be announced before the races, as four people will be allowed.

And then how lucky.

The second is the first of the losers, ”the specialist noted.

According to commentator Dmitry Guberniev, the roster for the Olympic Games is good, but the main problem of the team today is in preparation for the Games.

Difficulties may arise due to the cancellation of the last stages of KM and an unbalanced calendar.

“If we talk about guys and girls, then the composition is excellent, fighting.

The only question is that at our Olympics people will run 50 and 30 km for the first time this season.

KM turned into mass starts and sprint races, which is very strange.

For example, in biathlon, the individual will pass the third time.

In skiing, the calendar is monstrous, and the coronavirus also intervened.

The federation also cannot organize competitions like in biathlon.

There will be difficulties, but not only for our team, ”Guberniev believes.

In turn, Legkov also noted that now a lot is in the hands of the coaching staff, since the preparation of skiers for the Games needs to be adjusted.

“Cancellation of stages will affect some, but others will not.

Depends on the training plan of each athlete.

Those who played at the Tour de Ski will be less affected.

But for the guys who missed the stage, but got into the Olympic team, it would be very cool to perform at the international start.

It will be more difficult with them.

We must now somehow correct this moment.

The coaches themselves understand everything, "Legkov admitted.

As Sorin said, while the team's plans have not changed much, however, due to the cancellation of the KM stages, they will have to look for an opportunity to hold test starts or participate in other competitions not canceled by FIS.

“We will prepare as planned.

We collect in mid-altitude conditions in Italy.

The Wartko group is located at the same altitude, 30 km from us.

The only thing is that now we will not go to the WC stages, we will compete somewhere nearby, looking for an opportunity to hold some kind of control starts or FIS competitions, ”the coach said.