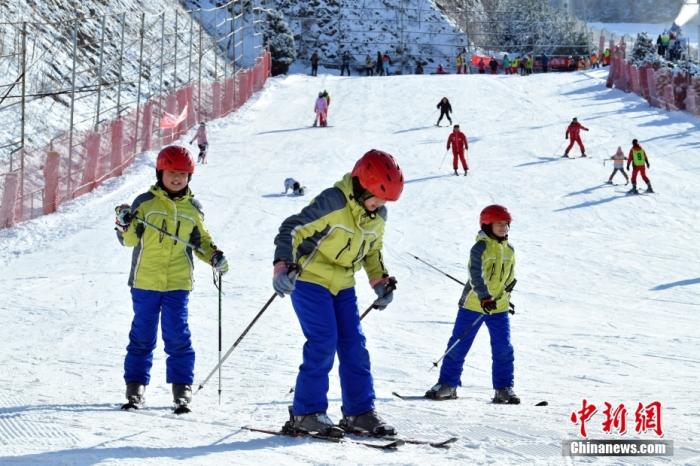 "As the 2022 Winter Olympics and Paralympics in Beijing are approaching, I find that more and more students are exposed to ice and snow events and learning short track speed skating."

Kang Jiahui's love for short track speed skating is the epitome of the rising ice and snow boom in China in recent years.

According to data from the Winter Games Center of the State General Administration of Sports, as of the beginning of 2021, 654 standard ice rinks and 803 indoor and outdoor ski resorts have been built across China, an increase of 317% and 41% respectively from 2015.

After getting involved in ice and snow sports with friends six years ago, Zhang Yaqin, who works in Beijing, began to buy ski equipment, helmets and other ski equipment, and checked in the ski resorts of all sizes in Beijing. “Skiing is a sport that makes people forget their worries. , Enjoy the close contact with nature, the blue sky and white clouds seem to be within reach."

"Skiing can exercise your body well and bring happiness to the body and mind." Xu Zhensheng, a ski enthusiast, mentioned that during the New Year's Day holiday he specifically went to the ski resort to check in and experience the charm of the "Ice and Snow World".

Beijing, the "Double Olympic City", also uses the "East Wind" of the successful bid for the Beijing Winter Olympics to increase the supply of ice and snow facilities year by year, igniting an upsurge of ice and snow sports.

Yao Yu, general manager of Badaling Ski Resort, said that as a popular ski resort in Yanqing District, Beijing, in addition to creating good conditions for skiing "enthusiasts", it also pays more attention to the skiing experience of junior skiers.

Next, we will make every effort to promote ice and snow sports to create a strong ice and snow atmosphere for the arrival of the Beijing Winter Olympics.

As a "golden name card" for the Beijing campus ice and snow sports events, the elementary and middle school winter sports games have gradually developed from fun events such as ice puzzles and snow climbing to short track speed skating, figure skating, curling, and ice hockey. , Alpine skiing, snowboarding and other professional events; the competition period has also lasted for nearly two months from the first one month.

According to statistics, Beijing has established 200 characteristic schools for ice and snow sports and 200 demonstration schools for Olympic education. The number of elementary and middle school students in the city has reached 2.1 million on ice and snow.