The threatening precedent of 2015 and Ancelotti's criticism: "We were on vacation"

It is very unusual to see Carlo Ancelotti lose his characterizing serenity. He has tables, many, and he has mettle, although the sensor of his emotional state is the eyebrow that ... 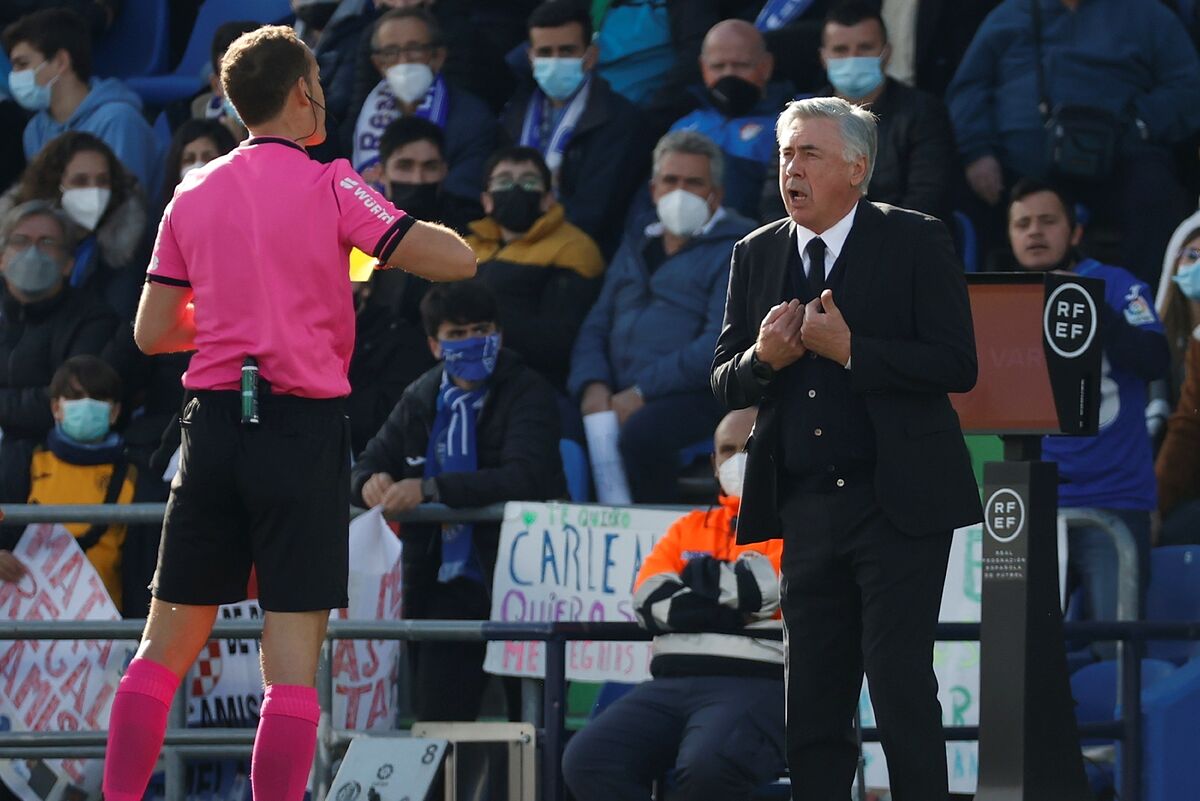 It is very unusual to see

lose his characterizing serenity. He has boards, many, and he has mettle, although the sensor of his emotional state is the eyebrow that rises and falls. In the Coliseum, however, you didn't have to notice the details of his face. The anger of the Italian in the band was evident from the first minutes, something that did not seem justifiable only because of

, when practically the entire match was yet to be played. By his gestures, however, it did not seem to be the beginning of the duel, but the end.

Ancelotti undertook it with the fourth official, to whom he insisted on Getafe's tickets, intense, hard, although nothing that went out of the expected script against a rival in need or that his Madrid had not faced other times. Perhaps his memories would assail him, the worst in his two steps through Madrid. In 2015, months after having raised La Décima and starting another course as a battleship, he returned to the League, on January 4, with a defeat against Valencia (2-1), a prelude to a collapse whose only explanation seemed to be in a squeezed eleven. He finished that year sentenced at the Bernabéu against the same team (2-2) and sanctioned because, two days before the end of the competition, he made fun of the referee

, by applauding him in his face, after a helpless exercise of his own.

Yesterday, he left the Coliseum sanctioned with a yellow, very angry and without even greeting

, on his way to the dressing room.

had not previously admonished the players of Quique Sánchez.

This is not the time to summon ghosts.

He referred to the poor response of his team, which according to the Italian coach, continued on "vacation."

FOUR POINTS ON THE BARÇA

The situation is not like then, it is true. Despite the streak of 22 consecutive victories at that time, the biggest advantage that the white team managed to get in the League over Barcelona was four points, on matchday 15 (39 against 35). Now it is different. It multiplies it by practically four against the Catalans, although with one more game, and by three against the rojiblancos, who had also just won the previous league then, although the weight of the European final in Lisbon, resolved in favor of Madrid, it was qualitatively incomparable.

Now Madrid has a huge margin over the other great candidates, but the question remains whether its players, the main ones after 30 years, will resist without rotations or if the Italian will opt for them, precisely when the level commitments accumulate. for the white team in the coming weeks.

The Italian used them at the start of the season, until the Sheriff's scares, in the Champions League, and the fall in Cornellà, against Espanyol.

Since then, in October, Madrid had not lost, with a very fixed eleven.

In Getafe, he did it again, without the losses due to Covid diminishing his structure, beyond the loss of

In the last three league games, if we count the advance against Athletic, they have lost five points.

"I am not worried that the streak will be cut," said Ancelotti, quite certain that the defeat was due to a circumstantial problem, not a change in trend. “Preparing these games after the Christmas period with players who travel abroad is not easy, but talking about this would be looking for excuses and I don't want to do it. We haven't played well, we didn't deserve to win, although I don't think we should lose either, "he said.

“We have not been the Madrid before Christmas, with less concentration and commitment, and I already warned the players about this yesterday [on Saturday] after training.

Surely, this is a wake-up call for a team that was still on vacation.

It is possible that the coach was also, "he insisted, although he quickly wanted to turn the page to what happened at the Coliseum.

Debating excessively can raise doubts that the team does not have.

Or did not have.

"This has already happened and we look forward with great enthusiasm, because we are leaders and we are motivated for what is to come."

And because they are from a long distance, not like in 2015. Away from the League, there is no doubt about it either: Barça in the Super Cup and PSG in the Champions League.

LaLiga There is no rival in the League for Real Madrid

LaLiga SantanderMadrid, who fell in Getafe due to a Militao error, did not return as the leader who went on vacation

LaLiga Santander 2021 - 2022Xavi and Ancelotti, two ways of facing life (and the virus)