At the start of the NHL season, a woman behind Vancouver's booth in Seattle's first home game discovered a suspicious spot on the neck of materialist Brian "Red" Hamilton. She wrote a message on her cell phone and showed it off. The suspicion was real and it turned out to be the dangerous skin cancer malignant melanoma. - Your instincts were right, and thanks to your persistence and the quick work of our doctors, the stain has now been removed. You saved my life, says Hamilton. 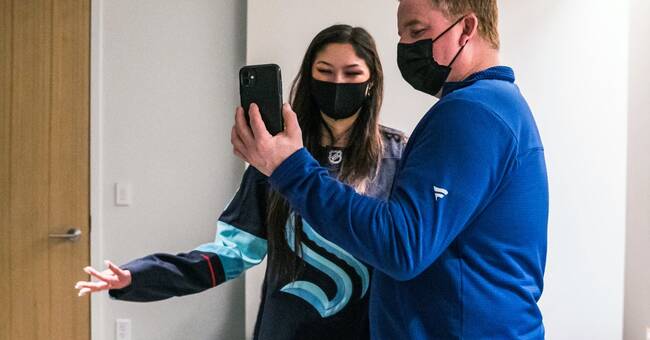 To show her gratitude to the unknown woman, the Vancouver Canucks posted a wanted ad on her social media and was quickly identified as Nadia Popovici, a 22-year-old medical student.

See the meeting here between Hamilton and Popovici.

"Hearing this several months later is just so incredible, that I had the chance to reach him at that moment," Popovici, who is a fan of the Seattle Kraken NHL team, told the Seattle Times.

When Kraken retweeted the search, it was Popovici's mother who discovered it.

- My mother said: "You have to check Kraken's social accounts, you have no idea what's going on", Popovici says to Kraken's website and could not believe that anyone was looking for her.

In connection with the meeting between the teams in Seattle during New Year's Day, they had the opportunity to meet each other and then Kraken and the Canucks took the opportunity to give her a check for SEK 90,000 to help with their medical studies.

They hugged and everything was shown on the big screen while the whole arena stood up and clapped and cheered.

- I wanted to meet her and tell her that she is a hero.

Thanks was her effort, I had never seen the stain in the neck, did not know it existed, I could quickly get help and since it was then only superficial, everything could be removed.

She extended my life, says "Red" to Vancouver's website in a video interview.