To Klebo's delight: Bolshunov did not reach the sprint semifinals at the first stage of the Tour de Ski

The Tour de Ski started in Lenzerheide, Switzerland. At the first stage, medals were played in the sprint with a skating course. The current winner of the stage race, Alexander Bolshunov, stopped at the quarterfinals stage, while his compatriots Gleb Retivykh and Alexander Terentyev went one round further. Leadership in the overall standings was taken by the Norwegian Johannes Klebo. 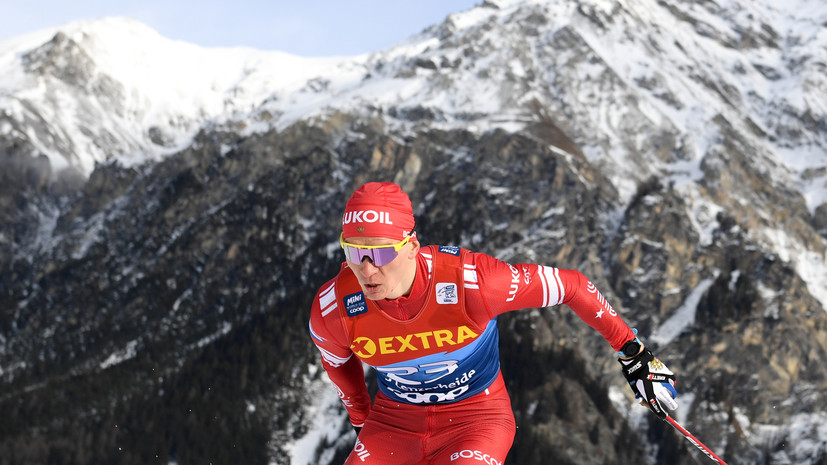 The Tour de Ski this year received the shortest program in history - only six stages.

So the organizers decided to make life easier for skiers who, after climbing the Alpe Cermis, will only have a month to prepare for the Olympics.

Due to the fact that the number of stages was reduced, those wishing to get the "Crystal Pyramid" had to join the fight already from the first sprint in Lenzerheide, Switzerland. If usually this warm-up start had almost no effect on the overall standings, now the participants could not lose a second, otherwise there would be almost nowhere to play them, and a failure in qualification could generally become fatal for the champions of the title.

This is what almost happened to Tatyana Sorina.

She made her way to the main part of the competition with the 30th time - she runs four hundredths of a second slower, she would not have to return to the sprint track.

In addition to her, Natalia Nepryaeva and Yulia Stupak overcame the selection from the Russians, taking 23rd and 26th places.

All three lost more than six seconds to the hostess of the first stage, Nadine Fendrich, who won the prologue.

Veronica Stepanova, who flashed this season, did not take part - the day before the start of the Tour de Ski, she starred due to poisoning.

Among men, Johannes Klebo achieved the first success in the stage race.

In rather difficult conditions, when, due to warm weather, the snow became too soft, and after the girls turned into a mess, the Norwegian won the qualification, and even ahead of the closest pursuer Richard Juve by 2.45 seconds.

It turned out to be more difficult for the Russians to cope with the vagaries of nature, but those who were supposed to be in the top 30 did it. Gleb Retivykh finished the top ten, Alexander Bolshunov was right behind him, losing to Klebo for almost seven seconds. The 14th and 15th times were shown by Artyom Maltsev and Alexander Terentyev. Ivan Yakimushkin also made his way to the playoffs, for whom sprint is not a major discipline.

In the first elimination race, the Russian national team had its own representative. Julia Stupak was in the same six with Fendrich, last year's champion Jessica Diggins from the USA and Norwegian Anne Kalvo. The Swiss woman was a clear favorite, but misfortune befell her - due to a fall, she could not compete for tickets. Stupak was not noticeable for a long time, but in the last 300 meters it accelerated very powerfully. Catching up with Calvo did not work, but the fight with the American turned out to be fierce. As a result, the Russian woman lacked only four hundredths of a second to directly break into the semifinals.

Two other Russian women got into the same company with the Norwegian Tiril Veng. Nepryaeva tried to stay in the leading group, but on the descent she literally stood up. The thought immediately crept in that the servicemen were mistaken with the preparation of the skis, but this turned out to be not the case. Nepryaeva worked brilliantly at the finish line and bypassed everyone except Veng. Sorina kept at the tail of the group all the time and did not have time to correct her position. Together with her, Stupak ended the fight - at the last moment, her status as a lacquer-loser passed to another athlete.

When the men started, Klebo again showed himself in all his glory, winning his race in one wicket. He even performed a victory dance right after the finish line, although it was still a long time before the medals were drawn. Bolshunov did not have so much fun after his race. He tried to apply the tactics of an early finish and came out early enough, but the Norwegians Even Northug and Paul Golberg managed to overtake him, and then lock him in the "box". No matter how hard the reigning Tour de Ski champion tried, he could not get out from behind their backs. All that was left was to hope that we would be able to make it to the semifinals in time.

However, his own compatriots deprived him of this opportunity.

First, Zealous finished third in his race, having managed to join the fight at the finish line, and then Terentyev earned a ticket.

He was also the leader in his race and at the end of the race he could not hold back the pressure of two Swiss Roman Furger and Valerio Grond.

Out of frustration, the Russian skier did not even push to the end and do the splits, but still made it to the next round.

Bolshunov, on the other hand, has not been able to win a sprint medal for almost a year, although earlier it was a habit for him.

Nepryaeva did not make it to the finals either.

In her race there was no excess of dangerous rivals, but the Russian woman again had a problem with the descent.

She lost too much time on it, but she didn't have enough strength for a new leap.

Although the race was fast, from the last place Nepryaeva could not go further.

Zealous just found himself in an incredibly formidable company led by Klebo, Juve, Nortug and two more famous sprinters - the Italian Federico Pellegrino and the French Luca Chavana. The Russian in their background turned out to be uncompetitive and split from the group after the first rise. It was extremely important for the Zealous to prove themselves in this very race - before the Tour de Ski, the FLGR President Elena Vyalbe set a condition for him that in order to get to the Olympics, he had to win a medal in Lenzerheide. The skier did not cope with this task, so the three-time world championship medalist will not go to his first Games until 2026.

Terentyev remained the last in the struggle for the awards of the first stage of the Tour de Ski. In his semifinals, he remained in the shadows for a long time, waiting for the final showdown. At the last corner, he deftly slipped into fourth place and got free space, but it did not work out to accelerate on a straight line. The Frenchman Renault Jay rather roughly pushed Terentyev to the banners on the sides of the track, because of which the Russian had no chance to rise higher. Jay was disqualified for this, but it still did not help Terentyev to go further and try to impose a fight on Klebo.

The victory in Lenzerheide remained with the Norwegian.

In the final, he also confidently dealt with all rivals, as he did in all skating sprints this season.

After missing last year's Tour de Ski, Klebo immediately put on the yellow jersey of the leader of the stage.

Its previous owner Bolshunov is 59 seconds behind the Norwegian skier in the overall standings.

He will be able to try to close the gap on December 29, when the classic 15 km time trial for men and 10 km for women will take place.