The Dubai Open Championship for kitesurfing - Kite Surf - will return to the shores of Dubai again, starting tomorrow, for three days at Kite Beach in Jumeirah, with the start of the first round competitions within the marine racing calendar in the 2021-2022 sports season. 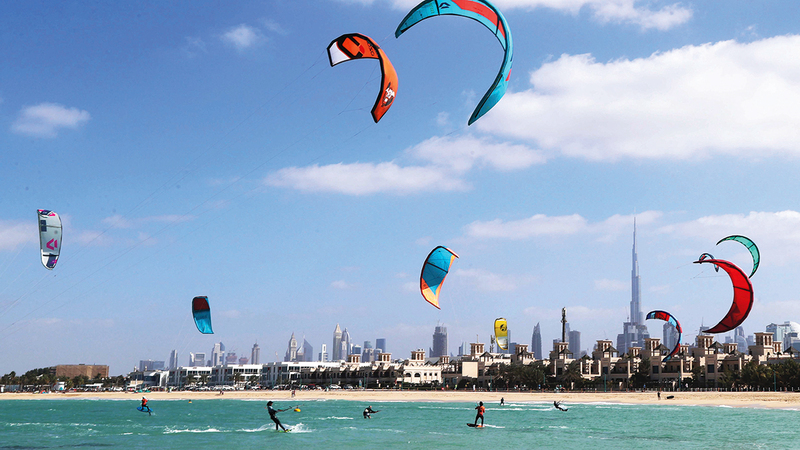 The Dubai Open Kite Surf Championship will return to the shores of Dubai again, starting tomorrow, for three days at Kite Beach in Jumeirah, with the start of the first round of the marine races calendar in the 2021-2022 sports season.

A press release said: "The Dubai International Marine Club is organizing the Dubai Open 2021-2022 for the fifth consecutive season, in cooperation with the Emirates Committee for Kite Surf, Rowing and Surfing of the Emirates Modern Sailing and Rowing Federation, headed by Sheikh Ahmed bin Hamdan bin Mohammed Al Nahyan."

For his part, Executive Director of Dubai International Marine Sports Club, Mohammed Hareb, said: “The Dubai Open Paragliding Championship attracts a group of lovers of exciting marine sports from the country’s champions, as well as the resident communities, where, like other marine sports, it is very popular, which has doubled dramatically in The past seasons, especially in the Emirate of Dubai and Jumeirah Beach, which are replete with colorful umbrellas that rise on its beautiful, warm beaches.”

Hareb revealed that the program for the first round of the Dubai Surfing Championship - Kite Surf - will include three consecutive days, starting from tomorrow until next Saturday, to give fans of this sport the opportunity to highlight their skills, especially with the availability of all the elements required to make it successful with the state of the sea and wind speeds. expected.

The CEO said that the Dubai International Marine Sports Club has completed all the preparations and arrangements in coordination with government departments and national institutions to hold competitions over three days in the most beautiful beaches of Jumeirah Kite Beach, and technical matters were reviewed in coordination and partnership with the Emirates Committee for Kite Surf, Rowing and Surfing. Affiliated to the UAE Federation of Modern Sailing and Rowing.

He stressed that the competition program will start tomorrow through skateboard competitions (Twin Tip) as well as freestyle games, with the focus on the “Hydrofoil” competitions on the next Friday and Saturday, according to weather conditions, sea conditions and wind speeds that govern the quality of competition.

He stated that the club, in order to increase the excitement and interest of fans of this sport, decided to introduce two categories to compete during the days of the tournament, which is to record the highest jump for the participants in the “Dubai Air” competition, as well as the circular motion competition and the 360-degree rotation ring, or what is known as the “Mega Loop” competition.

• The competition program will start with skateboard competitions (twin tip) and freestyle games.