National team swimmer Yousef Al Matrooshi, the last UAE swimmer in the World Short Course Swimming Championships (Abu Dhabi 2021), is competing in the 100-meter freestyle race, and hopes to achieve the qualification number for the next world championship by achieving the qualifying number directly without the need for an invitation card. 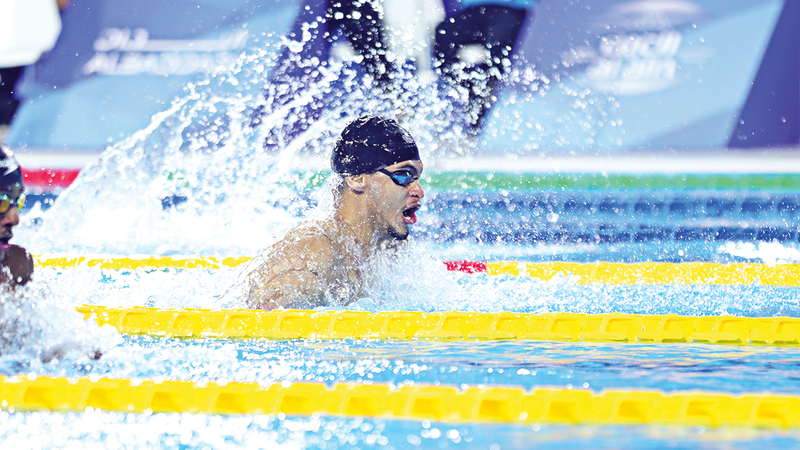 Al Matrooshi has the country number and the best number in the history of Emirati swimming in the 100-meter freestyle race, where he previously achieved 49.11 seconds, which is close to the number of direct qualification to the world championship in Japan next May, where he needs 23 parts of a second more than the qualified number of 48.88 seconds, and if he succeeds Youssef, in achieving this number, will be the first swimmer in the history of the UAE to be in a world championship with a qualifying number and not an invitation card.

All Emirati swimmers finished their participation in the championship, achieving three new records for the country through their first participation in this global forum, and the Al Matrooshi race remains today after he failed in his first 100-meter butterfly race, which is the first opportunity that the player failed while waiting for the results of today's race.

For his part, the coach of the national team, Marwan Al-Hattawi, told «Emirates Today»: "I hope that Youssef will be as successful as the rest of the youth participating in the tournament, as Salem Ghaleb, Ahmed Al-Marzouqi and Muhammad Rashid Al-Hammadi succeeded in achieving new personal numbers for them and the state in their second race in the championship, After failing in the first race as a result of the dread of being in the world championship for the first time.”

Al-Matrooshi had participated in the Tokyo 2020 Olympics, and succeeded in achieving seven medals in the Arab Swimming Championships, which was held in Abu Dhabi last October, and is preparing to leave for America next month in order to complete his training and studies.

• Al Matrooshi has the best number in the history of Emirati swimming in the 100 meters freestyle.

El-Desouky: The Egyptian champions qualified for the final rounds as evidence of development

The coach of the Egyptian national swimming team, Dr. Mohamed El-Desouky, confirmed that "Abu Dhabi" deserved the medal for the ideal organization of the World Championships for short distances "25 meters", which is currently taking place at the Etihad Arena in Yas, and said, "All the factors of dazzling and success were achieved in the Abu Dhabi Championship, which raised the head of The Arabs have an ideal organization that represented the best compensation for the absence of medals in various competitions, despite the honorable level of the champions.

El-Desouky stressed that the Egyptian team’s participation in the World Swimming Championships was not for honorable representation, and he explained, “We came to Abu Dhabi for the competition, which was demonstrated by all the participating champions by qualifying for at least the semi-finals, while the duo Youssef Ramadan fought Farida Othman are finalists, respectively.

Youssef Ramadan, 19, finished his participation in the final of the "100 meters butterfly" race in fourth place, with 49.50 seconds, surpassing his personal record in the Tokyo 2020 Olympics, during which he completed the distance in 51.57 seconds.

Anthony Irvine: Abu Dhabi fascinated me... and "Etihad Arena" is a global masterpiece

American swimmer Anthony Irvine, who won gold at the Summer Olympics in Sydney in 2000, who during the event in Abu Dhabi supervises many training sessions in which young swimmers participate in the country with the aim of motivating them to practice extensive swimming, expressed his admiration for the distinctive facilities enjoyed by the “Etihad Arena” » and the experience of hospitality in Abu Dhabi, and he said: «I enjoyed my visit to Abu Dhabi a lot, and I was impressed by its wonderful facilities and the facilities available at the Etihad Arena and Yas Bay, and I support the idea of ​​organizing a water sports festival, I was pleased to follow the swimmers training for the high diving championship and very enthusiastic open water races, in the same location in An organization that mimics the Olympic Games.

The 40-year-old swimmer gained international fame when he auctioned his gold medal to support those affected by the tsunami 17 years ago.