"He loves to play hockey": Ovechkin repeated the NHL record for most goals and led the league scorers' race

Alexander Ovechkin scored two points in the NHL regular season match against Chicago and repeated Dave Andreychuk's record for the number of goals scored in the majority. It is symbolic that the captain of “Washington” was assisted by Niklas Beckström, who returned to the ice after injury, who has already created 115 goals in the majority for the Russian. Ovechkin took first place in the top scorer this season, beating Edmonton strikers Leon Dreisaytl and Connor McDavid. 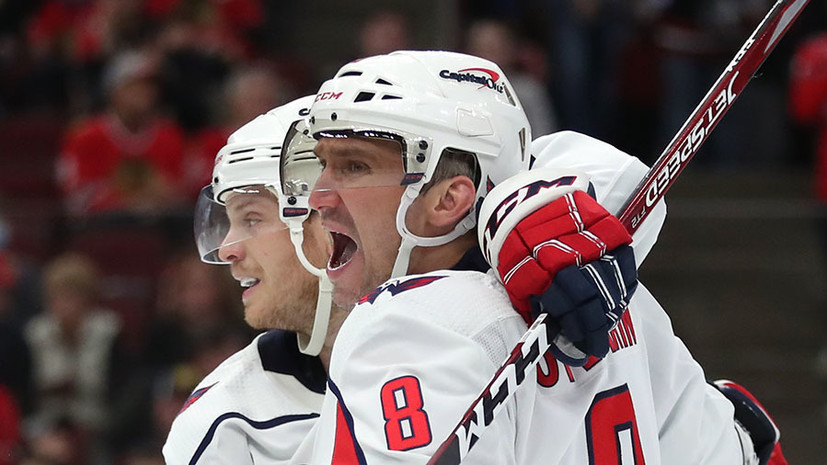 Russian Alexander Ovechkin played another productive match in the regular season of the National Hockey League, repeating the NHL record for the number of goals scored in the majority and coming out on top in the scorers' race of the 2021/22 season.

In rivals, “Washington” this time was one of the outsiders of the Western Conference “Chicago”.

At the same time, the Blackhawks have recently been an inconvenient opponent for Peter Lavioletta's team.

In the current season, the teams have already met, and the capital club lost in the shootout.

Unsuccessful for the "Capitals" and the reported confrontation turned out.

Before the game in Ovechkin's squad, there was a forced replacement.

Forward Yevgeny Kuznetsov got into the covid protocol and was replaced by Lars Eller.

Although another candidate seemed more suitable - Niklas Beckström, who missed the start of the season due to injury, but recovered to play against Chicago.

The striker has been the main assistant to Alexander the Great in recent years, but Laviolette decided otherwise, sending Backström to a link with TJ Oshi and Conor Shiri. So on the ice, in equal compositions, the Russian and the Swede practically did not intersect.

Nevertheless, Ovechkin and Bekström still play in the same link in the majority draws.

In the 23rd minute of the game, Blackhawks captain Jonathan Toews was sent off, hitting Trevor van Riemsdyck with a stick.

Hockey players of "Washington" rolled into the zone, Bekström gave the pass to Oshi, and he passed it just under the throw to the captain, who was in the left circle of the throw-in.

Alexander from his favorite position could not miss.

The goalkeeper of "Chicago" Marc-Andre Fleury formally became "the most beloved goalkeeper" of the Russian - the Canadian conceded 25 goals from Ovechkin in the regular championships, ahead of Henrik Lundqvist (24).

For the captain of the Capitals, this puck became the 274th in the overseas career when playing in the majority (according to this indicator, Ovechkin caught up with the NHL record holder Dave Andreichuk) and 751st in total.

However, further events in the match did not develop so rosy for the charges of Lavioletta.

The rival gave a striking segment in the middle of the second period, scoring three times in 34 seconds of playing time (in 5x3, 5x4 and 5x5 squads).

And already "Washington" was in the role of catch-up.

Ovechkin and his partners tried to rectify the situation.

Alexander had enough chances for this.

He hit ten shots at Derek King's team in a game and looked like one of the best on the team, with and without the puck.

However, the game was evened out thanks to the accurate throws of Daniel Sprong and Lars Eller.

The fans of "Washington" were not happy for long.

Five minutes before the end of the meeting, Alex Debrinkat scored a double.

The guests had to save the situation again.

The team's second comeback turned out to be more epic.

Having removed the goalkeeper, the "capital" literally piled on Fleury's goal.

Ovechkin drew the attention of two opponents who were waiting for his throw, and without looking, made a pass to Shiri.

The American fell along with his guardian Dylan Strome, but managed to transfer the puck into the goal three seconds before the siren.

The German and the Canadian have 45 points each, but the closest pursuers of the Washington striker had two fewer matches.

At the same time, the Russian has only three points left to move to 25th place in the list of the best NHL scorers in history.

Washington failed to end the meeting on a positive note.

In overtime, Shiri lost the fight to Kane in a foreign zone, after which Kirby Duck and Caleb Jones ran away two-on-one.

The Capitals goalkeeper Ilya Samsonov coped with the first throw, but hit the puck right on a nickle, from where the defender sent it into an empty corner.

We should also mention the brilliant play of 37-year-old Fleury, who made 42 saves (91.3% of reflected shots).

After the match, the Washington mentor again spoke positively about Ovechkin's game.

However, Laviolett noted not so much the goal of the Russian in the majority and his record, but the charge for the fight and sincere emotions when it is possible to turn the tide of the meeting.

“I don’t know what to add to this.

Everyone sees and says the same thing.

This is an obvious picture.

But do you know what is the best thing about Ovi?

This is his pass he made to Conor Shiri three seconds before the end of the third period.

Evaluate Ovechkin's emotions at that moment.

This is what makes him special ... He really loves to play hockey.

Therefore, he competes with rivals, even when he is inferior in the score.

He scores goals, distributes passes and rejoices with happiness if his team was able to recoup and moved the match into overtime, "the NHL official website quoted the coach as saying.

I was sure that the Russian would break his record and Andreichuk.

The Canadian, who retired in 2006, noted earlier: it's only a matter of time.

“We had a good race with him, but one day that day would have come.

And I will say this: “It was a long time.

And the fact that I was on a par with Phil Esposito, Brett Hull, and now Alexander Ovechkin is a great honor for me, ”he said.

And, of course, it is symbolic that Ovechkin achieved a historical result with the filing of Bekström, who created 115 goals in the majority for the Russian, giving him passes.

They are the most prolific power-scoring duo in NHL history.