"He still has one last chance": Hajiyev about the future of Emelianenko, Mineev's rival and the deportation of Chorshanbiev

The third defeat in a row according to the rules of MMA can put an end to the career of Alexander Emelianenko. This was stated in an interview with RT by the president of AMC Fight Nights Kamil Hajiyev. The functionary also spoke about the immediate plans of Magomed Ismailov, explained why it would be difficult for Vladimir Mineev to find a new rival and complained that the Tajik citizen Chorshanbe Chorshanbiev was deported from Russia. 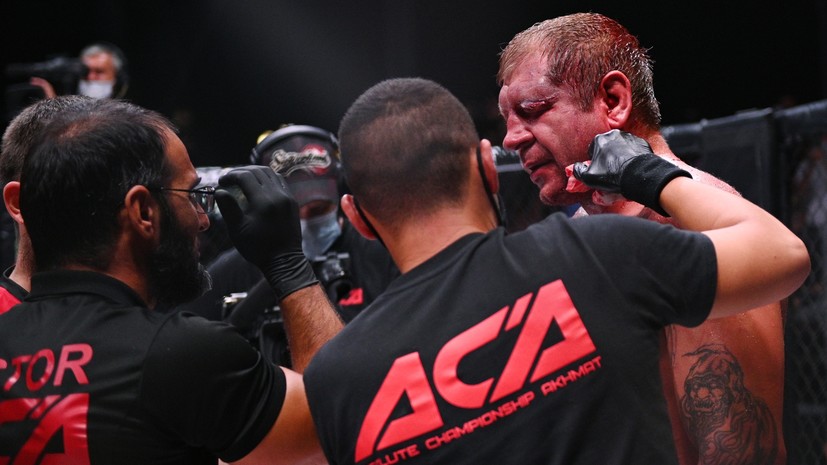 - You successfully fought the most anticipated fight of the year in Russia between Vladimir Mineev and Magomed Ismailov.

Does a third meeting between fighters make sense?

- At one time, after the fight between Fedor Emelianenko and Fabio Maldonado, I woke up and thought: "We won't do anything better."

It was also when Batu Khasikov fought in Luzhniki with Mike Zambidis, and ten thousand spectators gathered in the stands.

After Mineev's revenge with Ismailov woke up and thought: "Well, what else can you do?"

Something will definitely appear.

For example, the meeting between Mineev and Shlemenko will not leave anyone indifferent.

I understand that everyone has their own plans, and this confrontation is still far away, but I like the story.

- Did you talk with Ismailov about his plans?

- We had a telephone conversation two weeks ago, from which I understood that Magomed does not exclude the possibility of meeting with Vova again, if the latter himself is interested in this.

But now Magee has a couple of "starts" or fights ahead.

- Not in your league?

“I don’t know, but we can provide a site.

- Mineev said yesterday that at the moment he was not interested in meetings with Ismailov and Alexander Emelianenko, and the fight with Shlemenko was still a long way off.

Which option do you see as the most likely?

I agree that there are no obvious stories.

You have listed everything, and their implementation in the near future is impossible.

The MMA industry throws up new stories every day.

Suddenly a guy will appear who will make a fuss.

There is no desire to hint to them that it would be nice to promote a meeting with Mineev?

- I shouldn't tell anyone anything.

The guys should do everything themselves.

If someone says now, let's fight one of them with Mineev, I'm sure many will answer that they have not yet deserved such a meeting.

Without belittling their merits.

Shara played brightly in our league, but did not fight with David Barkhudaryan, and many are waiting for this very fight.

Alibulatov defeated Barkhudaryan, but had only one fight in AMC Fight Nights.

Therefore, for now, both options are excluded.

I do not believe in this.

- Is the possibility of Mineev's transfer to another division being considered?

- For this, Vova must become very difficult.

This means that he needs to perform in the middleweight division.

Now, if someone went down to him, that's another matter.

Vagab Vagabov, the champion in the light heavyweight category, recently announced that he would like to meet Mineev, but he will never keep up with 84 kg.

- And what about the intermediate weight?

As far as I know, Wagab makes his own weight (93 kg) and does not experience any particular problems.

- Were you disappointed with the form of Alexander Emelianenko in the fight with Marcio Santos?

Sanya performed well for a fighter who did not have the opportunity to prepare for a long time.

He agreed to fight on short notice.

Let's see in what form Emelianenko will be in six months.

And then his fight with Mineev according to the rules of boxing may become relevant.

- Emelianenko has two defeats in the last fights according to the MMA rules.

Moreover, in both cases, he lost to the middleweights.

Could this have such a negative impact on his reputation that viewers will no longer take Alexander seriously?

God loves the Trinity, and Sanya still has one last chance.

If he does not win the next fight according to the MMA rules, they can give up on him.

- What opponent would you pick for him if you were his manager?

- If I became the manager of Emelianenko, I would huddle pop-MMA and not take a steam bath.

He will beat them with one left.

The task of the manager is to make life easier for the athlete and to make more money.

But as a fan, I would like to see Sani meet with good opponents.

- You said that you are planning to attract Emelianenko to the next AMC Fight Nights tournaments.

Who could be his opponent?

- If he is in normal form, he can fight with Vagabov.

This is a good fight for heavy weight, provided that Sanya gains decent condition, and we will see this with some example.

We could not judge by his fight with Tarasov that he would be in shape for the fight with Santos.

Nevertheless, Emelianenko did not disappoint.

I would also fight Alexander with Artur Huseynov on the condition that the guys resolve this street conflict among themselves.

- Can you assess their showdown on social networks?

They have their own history of relationships.

It's good that now the passions have subsided.

Let them take the soul away in the "cage", and we, the audience, will have fun.

I begin to believe in this confrontation, because they decided not to "accelerate".

“Perhaps they originally wanted this.

But I don’t think it all started with a desire to sell the fight, it’s just emotions.

They have already dealt with them.

Further it should go easier.

- Did the victory over Emelianenko increase the attractiveness of Santos in Russia?

We are planning to organize fights for him, and now they will go better.

Now there are many more people who want to fight with Marcio.

What can you say about their level compared to professional athletes?

For example, Chorshanbe Chorshanbiev says he wants to join the UFC.

But this is a whole abyss.

The guys from pop-MMA today are not of the level to adequately perform in a company with strong fighters.

We need a very subtle matchmaking.

Barkhudaryan fought with Vladimir Radjabov, and the meeting ended in the first round after a low kick.

Although Radjabov seemed to be moving well.

- Do you plan to continue inviting them to your league?

And not only to attract an audience.

There are some very interesting guys on their own.

The goal is to have fun.

The promoter should also enjoy what he does.

- How do you feel about the deportation of Chorshanbiev?

I am worse about the fact that he was driving and fooling around.

The law must be respected.

It's a shame that it came to deportation.

With flamboyant characters like him, interest in MMA is growing.

- When will the next major AMC Fight Nights tournament take place?

- I will call the fight between Dmitry Bikrev and Yasubi Enomoto very high-quality and interesting, but I cannot call it major.