Only Klebo is ahead: Ustyugov won the first medal in two years in a personal sprint at the KM stage

Sergei Ustyugov won the silver medal in the skating sprint at the World Cup in cross-country skiing in Davos. He made his way to the finals with the best time of the day and ended up losing only to the Norwegian Johannes Klebo, who won the second consecutive victory in the discipline. For the 29-year-old athlete, this is the first such success since January 2020. Alexander Bolshunov, shortly before qualifying, refused to participate due to malaise. In the overall standings, he lost second place to Ustyugov and dropped to third. 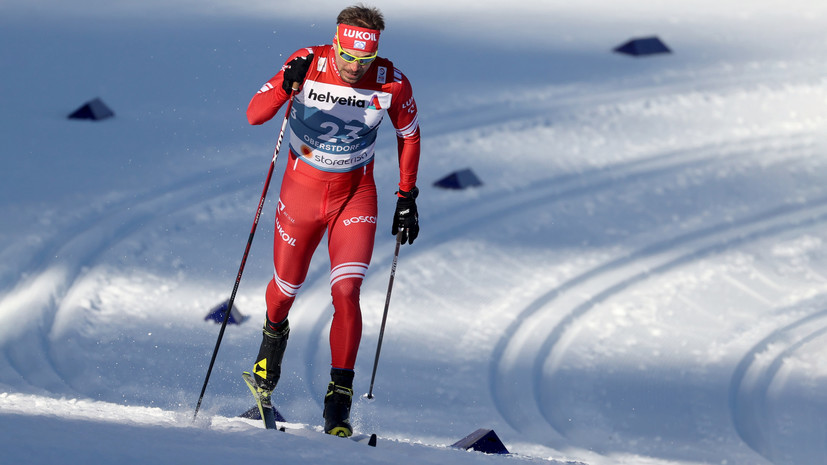 The World Cup cross-country skiing has moved to Davos, Switzerland, where the competition program has not changed for the last four years.

On Saturday, athletes compete in a personal sprint skating, and the next day they compete for medals and points in the race from a separate start at 15 and 10 km.

The same set of disciplines was present at the recent stage in Lillehammer, where the Russians never won personal medals.

It was possible to excel then only in relay races.

In the sprint, the best result was shown by the leader of the national team, Alexander Bolshunov, who took seventh place without reaching the final.

In Davos, the World Cup winner had every chance that the second attempt was more successful. However, shortly before the qualification, the Russian refused to participate due to slight malaise. Former skier Alexander Legkov told the details and told Match TV that Bolshunov risks missing Sunday's cut.

“Bolshunov did not start today. I called Elena Vyalbe - it turned out that he was a little ill. They do not understand whether it is an allergy or a cold. On Monday they will be tested, and everything will become clear. But, unfortunately, our main athlete and the person who leads the entire team does not start today. We really hope that he will recover as soon as possible. I don’t think he will take part in the cut-up here. Although they wanted to lower Alexander from the mountains, they decided that they would not, since he himself was against it. Alexander says: "I will stay here and train." In fact, Davos is a very good place, and all athletes love it, ”said the Olympic champion.

In the absence of Bolshunov, four Russians managed to make it to the main round. The sixth result in the prologue was shown by Sergei Ustyugov, the winner of the classic sprint in the Hand Alexander Terentyev became the 17th, Artyom Maltsev and Gleb Retivykh were in the third ten. The fastest, as expected, was the Norwegian Johannes Klebo, who not only never lost in Davos, but also won 18 sprint races of the last 20 in which he participated. For girls, the representation of Russian women turned out to be a little more modest. Yulia Stupak and Natalya Nepryaeva, who completed the top ten, as well as Khristina Matsokina, who showed 21st time, passed the qualification.

In the playoffs, the two women's leaders took turns in the quarterfinals and both built on their success. Nepryaeva was in the same race with the winner of the selection Eva Urevts from Slovenia and the fourth Nadine Fendrich from Switzerland. It was useless to argue with the hostess of the competition and the vice-world champion in the team sprint, but the Russian woman confidently coped with the other rival and went directly to the semifinals. This was followed by Stupak. She lost only to the Swede Maya Dalkvist, who won all the sprint gold this season, and the Russian skier lost this 0.19 seconds to the main favorite of the competition. Matsokina, on the other hand, became the sixth in her race and finished her performances.

The main round for men began with an interesting duel between Klebo and Ustyugov. Two years ago at the World Championships, their sprint rivalry ended in conflict, but this time everything went peacefully. Ustyugov made an impressive leap forward and due to this, together with the Norwegian, he reached the finish line, where Klebo was still the first. Gleb Retivykh could have made it to the semifinals next, but he was slightly unlucky. In the rivalry with the Norwegian Eric Valnes and the Frenchman Luca Shanava, the Russian was the third, but showed a good time, with which he could become a lucky loser.

However, Alexander Terentyev deprived him of this opportunity. In his quarterfinals, he turned out to be a cut above everyone else and took the lead at the beginning of the finish line. At the same time, he dispersed his pursuers so well that it was they who got the extra tickets to the semifinals. Zealous, together with Maltsev, had to end the fight.

Nepryaeva and Stupak ended up in the same semifinals, and their rivals were Urevts, Dalkvist and Fendrich, as well as last year's Davos sprint winner Rosie Brennen from the USA. In this incredibly strong race, Stupak could not immediately keep up with the proposed pace and rolled back. Nepryaeva for a long time kept in the leadership group of four participants, but at the finish she did not have enough sprint qualities. At the same time, it took her only 0.08 seconds to reach the status of a lacquer-loser. The Russian girls again failed to make it to the sprint finals.

He understood that it was pointless to fight such sprint masters as Klebeau, Valnes and Frenchman Richard Jouve at the finish line, so he again undertook powerful acceleration on the pull.

On the descent, even a very decent clearance was formed, especially in relation to Klebo, who hesitated slightly in this part of the distance.

Ustyugov was still overtaken on a straight line, but the Russian managed to stay in first place, even showing the fastest time of the day.

Klebo got the second direct ticket to the final.

Terentyev got into a weaker semifinal race, where Shanava was the main favorite besides him.

However, the Russian himself held this race weaker than the previous one, and another Norwegian, Even Nortug, added sharply.

Together with the Frenchman, he played the first two places, and Terentyev was never able to eliminate the gap that had arisen.

In the final, Ustyugov faced two representatives of France and three skiers from Norway.

The Russian athlete did not change his tactics and again powerfully climbed the hill, which none of the sprinters except him could simply repeat.

But this time Klebo did not miss this acceleration.

The leader of the World Cup held on to Ustyugov, and soon he was the first to take the turn to the finish line.

The Norwegian ran for his second win in the past week.

Ustyugov kept the second place and repeated his best result of the season - before that in Ruka he won silver in the pursuit.

For the 29-year-old skier, this is the first individual sprint medal since January 2020.

In the overall standings of the World Cup, Ustyugov climbed to the second position, displacing Bolshunov from it, who can no longer be considered the indisputable leader of the national team.