Loob hopes for Holtz: "It would be a huge addition"

Federal captain Tomas Montén left a forward spot empty in the JVM squad in hopes of freeing Alexander Holtz from the NHL team New Jersey Devils. SVT expert Håkan Loob believes that the 19-year-old's being or not being is a key for Sweden. - It is clear that he is a giant force in the offensive game. It would be a huge addition, he says. 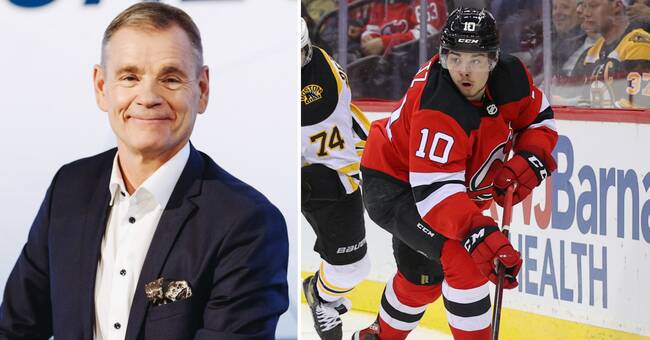 "A middle-class squad, neither strong nor weak."

This is how Håkan Loob sums up the squad that Tomas Montén presented today.

He sees the forces between the posts and on the back.

They must therefore deliver for Sweden to win a medal.

- I think it's about being good in the defensive game, because I think the goalkeepers and defenders are the tops.

Then there are some forwards that are interesting because they have playing styles that are inspiring and positive.

But many are untried.

They are happy to surprise, he says.

Especially the goalkeepers Jesper Wallstedt, Luleå and Calle Clang, Rögle, he highlights as a key player.

- If they get the right kind of help, the defensive game can take Sweden a long way.

That William Eklund came home to Djurgården from the NHL is of course positive, but now they are waiting for Holtz.

So far, he has made six appearances in the NHL and nine in the AHL Grand Prix League.

- It is clear that he is a giant force in the offensive game.

It would be a huge addition.

If he's not up and playing in the NHL, I can imagine that they would gladly let him go.

The fact that Rögle defender William Wallinder did not join has attracted attention as he has scored 10 points in 21 games in the SHL.

- When you look at the points league for juniors in the SHL, there are actually three defenders who top it and William Wallinder is one of them.

He is the one who has scored the most goals.

He has got things going very well.

Then you may think it's strange that he is not with, but at the same time Tomas Montén has an idea of ​​who is suitable to play with whom and then he may not fit in.

But I was a little surprised, says Loob.

SVT broadcasts the junior WC from Canada on December 27 to January 6.