Back to the world: Carlsen and Nepomniachtchi tied in game 10 of the match for the chess crown

Magnus Carlsen and Ian Nepomniachtchi played the tenth game of the fight for the title of the best chess player in the world. The Norwegian, who played with white pieces, was looking for an opportunity to win a third victory in a row, but he did not succeed in revealing the black positions. The Russian grandmaster only defended himself and persuaded his opponent to draw, to which the opponents agreed on move 41. The reigning world champion still wins three points and can defend the title at the end of the next meeting. 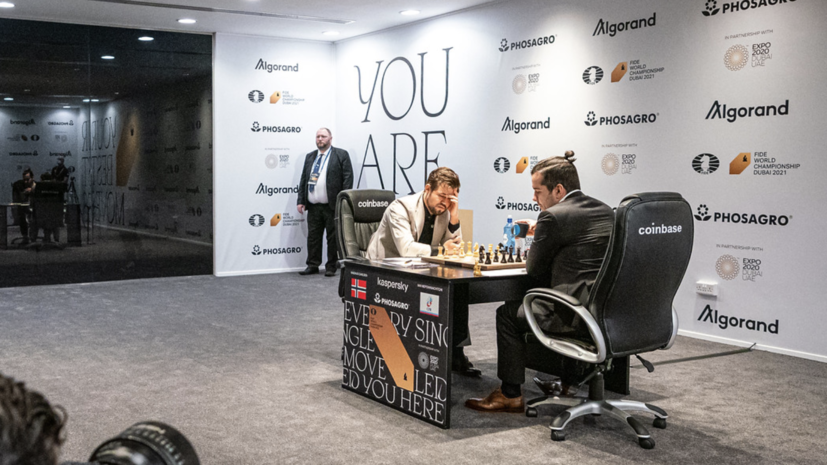 The match for the title of world chess champion is smoothly coming to an early end.

Magnus Carlsen, after three victories over Jan Nepomniachtchi, needed to score one and a half points in the remaining five games in order to retain the crown for another two years.

The Russian had very little time to win at least one victory - the number of compulsory games was reduced to only two.

The first of them was to be played by Nepomniachtchi with black pieces, which brought him so much disappointment in recent days.

This time Carlsen did not invent anything and started meeting with the move to e4.

The challenger moved along the same vertical, and then knights took up positions nearby - for the third time the chess players played the Russian game.

Which scenario she would have followed depended on the next move of the Norwegian.

He decided to take a pawn, as he did in the fourth meeting, but then retreated with his knight to d3.

On the fifth move, the opponents brought their queens out from behind the pawns, demonstrating their readiness to exchange them, but so far none of the opponents was going to follow this path leading to a draw.

Carlsen should be given his due - he pondered over his moves for a long time, as if the fate of the match hangs in the balance, and is not already practically decided.

In his pragmatic moves, there was a desire not to dry up the series, but to try to play again for a win, because no one had conquered the chess crown with four won games for a quarter of a century.

The Norwegian gradually captured the center of the board with his knights, when suddenly Nepomniachtchi decided to get rid of the queens.

After castling, he proposed to exchange the rooks.

This could in no way be called an attempt to reach the endgame and challenge the champion in it.

Carlsen began to hold back his bishops, since the Russian could also target them, and then it would have become more difficult for White to play for victory.

At some point, both grandmasters came to a dead end and could not please with any worthy moves.

Carlsen began to saturate the kingside with pawns, and it was there that Nepomniachtchi sent his knight, although it was obvious that he would have to quickly retreat under the pressure of the Norwegian.

In the end, the world champion decided to throw his dark-squared bishop into battle and immediately exchange.

At some point, Nepomniachtchi stopped going to the rest room, as he usually did after his move, and began to closely watch how Carlsen tried to come up with something unusual to aggravate the game. The world champion was considering connecting the rook, but she had nowhere to turn on the crowded kingside. All that remained was to cut the knot of pawns tied there, which Nepomniachtchi was only glad to see. The bishops remaining on the board also fell under the distribution.

In the arsenal of the grandmasters, there were left each knight and rook, so that the game could practically be declared a draw.

For some time Carlsen ran after the alien king and after the 39th move even found himself one step away from checkmate, as if counting on the fact that the opponent would make another blunder.

Still, Nepomniachtchi could not disappoint so much.

He pushed the rook aside, opening up space for the king, and an exchange immediately followed from Carlsen's side.

On move 41, the opponents shook hands.

After the tenth game, Nepomniachtchi said that, first of all, he tried not to make a mistake, and did not think about winning with black.

At the same time, he made it clear that he would try to challenge Carlsen once again when he received white pieces.

“When you play black, there is little choice, even if you play sharp variations, so to speak.

Of course, I have two more games ahead for White, so I have a chance to fight.

Today I set myself a simple task: I wanted to play an ordinary game, not to blunder in one move.

Do I want to win the match?

After the weekend, the grandmasters will sit down at the board again on December 10th.

This could be the last game if Carlsen manages to win it with black pieces.

Otherwise, another meeting will await the Russian and the Norwegian.