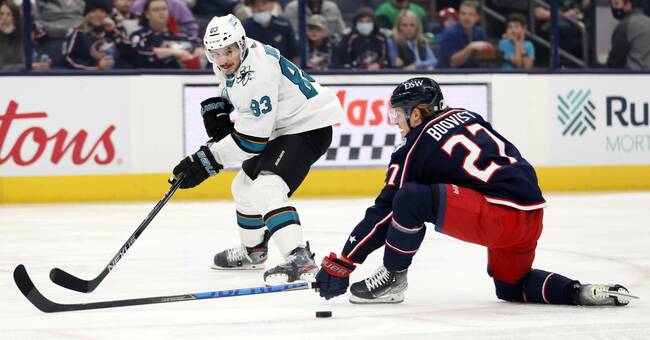 Adam Boqvist has not been a recurring name in the NHL's goal record.

Since the 21-year-old joined the league in 2019, he has previously scored at most four goals in one season.

But now the young hill has shifted up.

In the last six games played, the Swede has scored five goals - two of them came in tonight's home game against San Jose.

- It was a cool evening, says Boqvist after the match.

- My job is to distribute the game, score some points and help the team offensively, he states.

Before the match, teammate Gustav Nyquist received a club from San Jose's veteran defender Erik Karlsson, which he had signed for Boqvist, as the 21-year-old has looked up to the ten-year-old defender while growing up at home in Sweden, reports nhl.com.

Certainly an inspiring start for Boqvist, who then started scoring at the end of the first period.

The puck suddenly ended up free in the right drawing circle and Boqvist, who was guarding backwards, was able to run forward and place a shot on goal.

With three seconds left in the period, however, San Jose equalized.

The second period was then just over 20 seconds old when Erik Karlsson fired a shot from the blue line that tangled past all defenders and behind Elvis Merzlikins in the Columbus goal - San Jose had turned to 2-1.

The match would be even, intense and goal-rich.

Early in the third period, Columbus had turned to 4-3, when Gabriel Carlsson in front of goal found Adam Boqvist on the left wing, who from the side managed to place 5-3.

- We started the third period by holding back a bit, tried to play risk-free, and they scored two quick goals.

We did not get to the game after that, Karlsson states in San Jose after the match.

There was another goal for each team before the match was over.

Gustav Nyquist had the chance to put the puck in San Jose's empty goal cage in the final minutes, but gave the puck to teammate Alexandre Texier, who had to put the final score 6-4.

Hedman has now played together 26 points in 24 games - five goals and 21 assists - this season.

Tampa Bay has lost just five games this season and is vying for the top spots in the NHL's Atlantic division.

Things are worse for Philadelphia, which has now lost eight games in a row.