Chinese snooker made history again, but where did Ding Junhui go?

Image source: Zhao Xintong's personal social media.   In the early morning of the 6th, Beijing time, at the 2021 Snooker Championship, the 24-year-old Chinese player Zhao Xintong defeated his opponent Luka Brecher 10:5 and won the three championships for the first time in his career.   Before the start of the 2021 British Championships, almost no fans would have thought that the 24-year-old Zhao 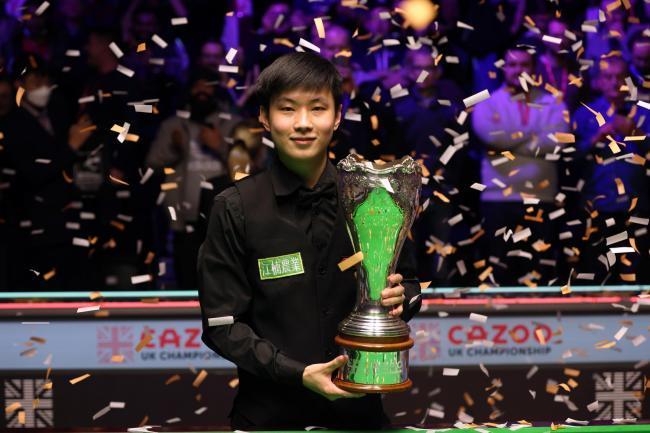 In the early morning of the 6th, Beijing time, at the 2021 Snooker Championship, the 24-year-old Chinese player Zhao Xintong defeated his opponent Luka Brecher 10:5 and won the three championships for the first time in his career.

Before the start of the 2021 British Championships, almost no fans would have thought that the 24-year-old Zhao Xintong would have the last laugh.

This is an honor he has not won.

Since officially becoming a professional player in 2016, Zhao Xintong has played in the professional snooker arena for five years and has not yet won any qualifying championship.

This is the field he has not yet conquered.

Competing on the same field, in addition to world-renowned Taiwanese players such as Higgins and O'Sullivan, there are also senior Ding Junhui and the same generation player Yan Bingtao, who is three years old, but has already won the "three major tournaments" championship.

But even in the face of numerous challenges from powerful enemies and the insurmountable gap in his career, Zhao Xintong still won.

In the early morning of December 6, Beijing time, Zhao Xintong faced Belgian Luka Brecher in the final of the Snooker Championship.

In the game, Zhao Xintong lived up to expectations, hitting a 100 and 6 50, and finally defeated his opponent 10:5, and won his first three tournament trophies.

This past night, Zhao Xintong used an undoubted play in the UK to achieve a new breakthrough in his personal career, and also opened a new chapter in the development of Chinese snooker.

The first "post-90s" player to win the three major tournaments, the youngest British Championship champion since 2011... Among the many achievements that Zhao Xintong has created, there is always one person who is unavoidable-Ding Junhui.

The rise of a new star is often inseparable from the leadership and guidance of predecessors, especially in the British Championships.

This piece of table has made Ding Junhui and Zhao Xintong, as well as Chinese snooker.

Regrettably, however, Ding Junhui, who has been battle-tested, lost to England's Sam Craig in the second round of this tournament and missed the top 32.

After Zhao Xintong won the championship, his world ranking rose to 10th, while Ding Junhui's ranking is likely to fall out of 16th.

Looking back at his career in the past ten years, such a situation is rare, but it is reasonable.

In fact, in the past few years, Ding Junhui's results have been unsatisfactory.

For a long time, he also fell into the embarrassing curse of "a round trip".

Winning the British Championship two years ago has become his brightest moment in recent seasons.

He tasted the taste of 258 days without victory. It was not until last month that Ding Junhui reversed Padgett 4:1 when he lost a game in the qualifying round of the English Open.

Data map: In the early morning of December 9, 2019, at the British Championship, one of the three major snooker competitions, Chinese player Ding Junhui defeated British player Maguire with a total score of 10:6, and won the championship again after 10 years.

I thought that Ding Junhui, who was in the "Fu Di" British Championships, could "make a comeback", but the result of stopping the second round still made people feel the ruthlessness and cruelty of competitive sports.

Some people say that Ding Junhui's skills are still in the top ranks, but his attitude to play makes people unable to feel the fighting spirit.

With the rise of social media, Ding Junhui also began to share his daily training life on the Internet.

Regarding his current state and the decline in world rankings, Ding Junhui once said that he did not care: "It's nothing more than playing a few more games. I just want to play every game well."

From the perspective of Ding Junhui, many honours that are difficult for ordinary people have already been acquired. Choosing to enjoy life is also an understandable decision.

But with Ding Junhui's latest Douyin, we still feel the determination of "China First Brother" to return to the top.

He showed the one-handed low shot in the video, and wrote: "Today, I will re-enact what I used to be, and I hope I can quickly get back to the previous state."

In the hearts of Chinese fans, Ding Junhui is the well-deserved "first person in Chinese snooker."

He dropped out of school since he was a child and went through ups and downs. At the age of 18, he finally won the 2005 China Open with a wild card, which was also the first ranked championship in his career.

In the same year, Ding Junhui defeated British veteran Steve Davis after 16 hard games and won the British Championship in one fell swoop.

Since then, the young Ding Junhui has become a leading figure in the Chinese snooker world.

And his turning out to be a Chinese figure in the world's top snooker arena.

Over the years, although Ding Junhui's state has ups and downs, his 14 ranked championships are enough to prove his strength.

What is even more rare is that under the influence of Ding Junhui, China has set off a craze for billiards. While the world's snooker can become bigger and stronger on the Chinese territory, countless young people have also begun to fall in love with the sport.

Looking at the Chinese snooker world today, in fact, in addition to Zhao Xintong, there are many young athletes who are moving towards the center of the world stage.

"There are talented people coming out of the country from generation to generation, and each has led the way for hundreds of years."

We should not only cheer for the heroes of the past, but also rejoice that more and more young players are emerging.

Only when the national hand is handed down from generation to generation, and the string song continues, can Chinese snooker be evergreen in the world of competition.

On the monument, the name of every billiard player is engraved.