SVT Sports expert Mattias Samuelsson called zorro penalties in floorball "a little naughty". 15-year-old Maja Helman started a Polish turnaround by scoring a goal with just one Zorro penalty. - If you practice a lot on it and then put it on, I think you can applaud it, she says to SVT Sport. 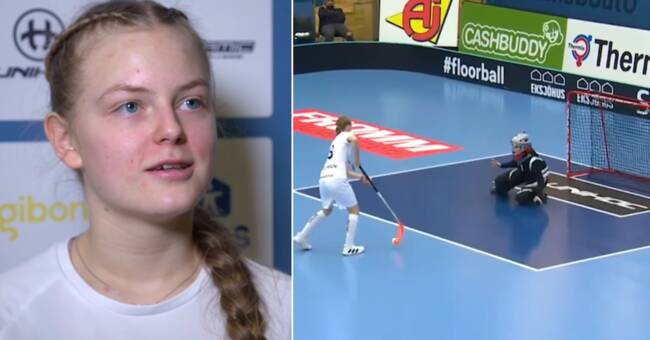 Maja Helman, everyday in FBC Malmö's junior all-Swedish team, grew up in Poland and came to Sweden with her family in primary school.

Due to her age, she does not have an A-license and is therefore not allowed to play senior floorball in Sweden yet.

However, Poland gave the 15-year-old the chance in the floorball World Cup, after which Helman accounted for one of the tournament's bravest goals.

At a 0-3 deficit against the Russian team, she showed evidence of icy nerves when she scored a zorro goal on penalties.

- I have practiced a lot and trained at home so I felt most secure with that punishment, says Helman.

Has been called "trams"

Maja Helman is not of the same opinion.

- It's a bit that you show your skills.

Then it's such a nice feeling when you put it on.

Many people say that it's just flex, but I think the best feeling is when you put a severe punishment.

If you practice it a lot and then put it on, I think you can applaud it instead, she says.

The women's floorball WC ended on Sunday with Sweden as the winner after a final drama against Finland.

Poland finished fifth and for 15-year-old Helman it has been a powerful experience.

- Coming here at such a young age is special.

You are young and play with the best in the whole world, it's unbelievable, she says.