With the front wing almost to the drag, after surviving a dirty and uneven battle, Lewis Hamilton crossed the line as the winner of a GP of Saudi Arabia that will go to ... 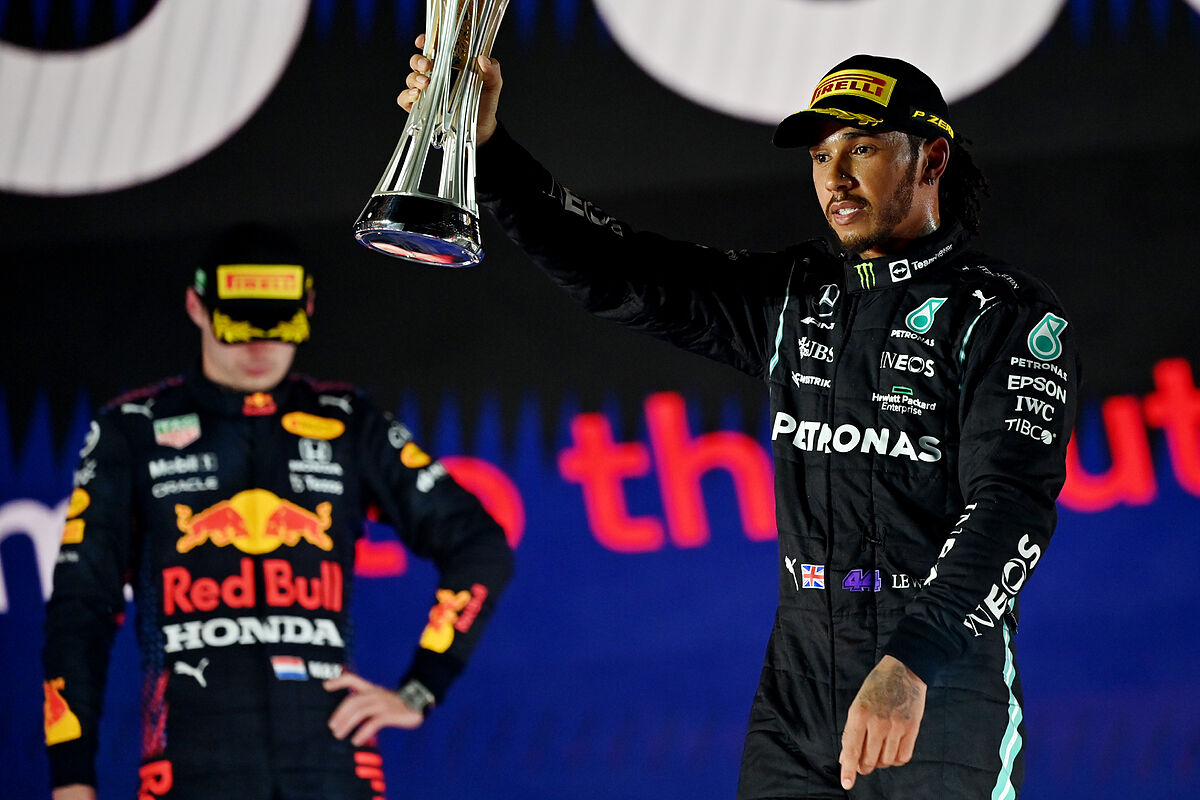 With the front wing almost dragged, after surviving a dirty and uneven battle,

crossed the line as the winner of a Saudi Arabian GP that will go down in F1 history. No one saw anything like this in the last decade. And this sport does not deserve the spectacle offered in Jeddah. Neither by

, author of a couple of intolerable maneuvers against his great rival, nor by

, race director, whose erratic decisions multiplied the confusion to the blush. On the podium, completed by

, Hamilton and Verstappen, neither looked at each other. In this way they were already preparing the way to Abu Dhabi, where next Sunday, with a tie on points, the world title will be played.

Of all the moments, embarrassing or brilliant, experienced in Jeddah, none quite like the one on lap 37, when Verstappen, on the straight, locked his brakes. At that moment he had to return the position to a Hamilton that, totally surprised, hit from behind, seriously damaging the aerodynamics of his W12.

, broken by nerves, tried to justify himself on the radio, where they had been warning him for some time. You had to give way, but safely, without severely compromising whoever was pursuing you. Masi, also overcome by circumstances, settled the matter with a five-second penalty. The fact is that this maneuver, with which he was trying to knock out a rival, is now rightfully included in the black legend of F1.

smashing his headphones against the desk epitomized the outrage of Hamilton, whose future hung to the beat of that spoiler. And he was able to hold up to the checkered flag to the delirium of Mercedes, who also celebrated Bottas' third place, decided almost at the photo finish before the push of

. All the credit also to the Frenchman, able to bravely push his Alpine.

, on the other hand, never found a way to find that rhythm and finished thirteenth. The heads-up between teammates was much more interesting at Ferrari, with

Everything would be resolved on the penultimate lap, with the Madrid native in eighth position, seven ahead of his position on the grid.

The only respite from an indescribable night came early as Verstappen waived any risk against Bottas in the start, just watching Hamilton's progression from afar. A general climate of caution was perceived, since a couple of hours earlier, the F2 race had been suspended after a very ugly accident on the main straight. Those fears were confirmed on lap 10, when a blow from

at the famous Turn 22 opened the first crack. With the

on the track, Mercedes called Hamilton and Bottas to chapter, while Red Bull left Verstappen on the asphalt.

The matter should not give much more of itself. In fact, all the projections pointed to a night full of interruptions. However, after three slowed down laps, Masi sent all 20 cars into the

in order to be able to repair the protections thoroughly. That red flag fell like wildfire on Mercedes' garage. "The Tecpro looked in good shape. Find out why they stopped us," Hamilton told

, his chief strategy officer. Beyond Masi's motives, what happened is that Verstappen, without eating or drinking it, saw himself in a position of absolute privilege.

There was plenty of time to digest the nerves during the 20-minute break and prepare the touch with the clutch for a new start from the grid.

With Hamilton slaughtered, from second place, anything could be expected at the end of the straight.

Including that skid in Verstappen's cleats.

badly cornered his great adversary, in an illegal maneuver.

Far from rectifying immediately, returning the position, he continued as if nothing had happened and Ocon took advantage of the facilities to sneak in second.

Before there was time for the stewards' investigation, another accident on the way to Turn 3 caused the second red flag. It was Leclerc's responsibility, who knocked out

. The abandonment of the Mexican was joined by those of

, without time or space to avoid the inevitable. What would happen for another 20 minutes in the

? Masi had the answer.

With the FIA ​​microphones open to television, the conversation on the radio left everyone in evidence. "I give you the opportunity to start second," said the Australian. "We'll think about it," Red Bull responded, unsure if it was behind Ocon or Hamilton. Even when the worst hypothesis was confirmed,

accepted at face value. He knew of the flagrant infraction of his pilot and that offer from Masi was better than the investigation of the commissioners. In this shameful marketing, the race could be solved. But neither.

On medium tires, it was Verstappen's turn to attack, this time he would not err on the grid, betting on all or nothing at the first chicane.

Hamilton wanted to cover Ocon, but left the inside free for Max.

Too much at stake, too much adrenaline.

There was no respite, not even after the

With the asphalt littered with Aston Martin debris, Verstappen had a little more leeway to take care of the tires.

Or so it seemed before he went totally crazy.

Formula 1Fernando Alonso climbs to the podium in Losail