The countdown to the Beijing Winter Olympics is two months, and the preparatory work is becoming more and more "detailed" 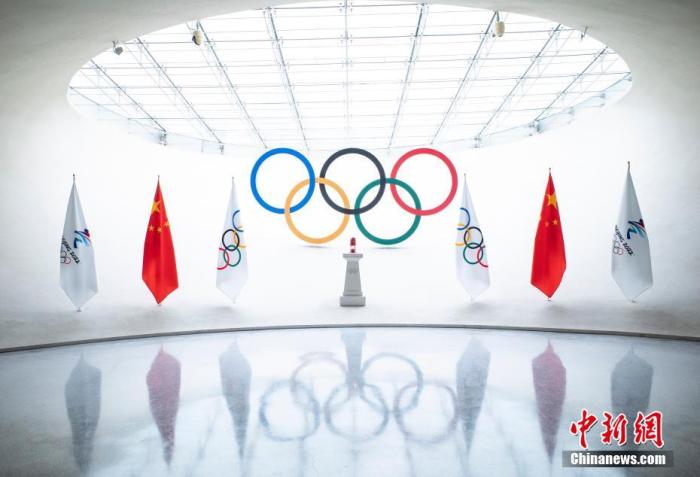 On November 5th, the Tinder for the Winter Olympics was displayed at the "Tinder Across Time-Beijing 2022 Winter Olympic Torch Relay Theme Exhibition".

Chinanews client, Beijing, December 4 (Wang Hao) On February 4 next year, the Beijing 2022 Winter Olympics will be grandly opened at the Bird's Nest.

From drastic construction to meticulous attention to detail, the preparations for the organization of the event are proceeding in an orderly manner when the Winter Olympics is still two full months away.

The so-called temporary facilities are the facilities used during the game and will be dismantled after the game. Specifically, they mainly include more than a hundred facilities such as systems serving athletes and spectators, broadcasting systems, sanitation and epidemic prevention, and security facilities.

It is expected that all temporary facilities will be completed and put into use by the end of December.

The 2021-22 International Bobsleigh Federation Sled World Cup ends on November 21. So far, in the Beijing Winter Olympics "Meet in Beijing" series of winter sports events, related testing activities in Beijing and Yanqing have come to an end.

On the whole, the various testing activities are progressing smoothly and are widely praised by participating athletes.

The picture shows the staff clearing the ice rink during the match between Beijing Polar Fox and China Ice Sports Academy.

At present, the entire schedule has entered the final third.

On October 14, the "Meet in Beijing" 2021-2022 Asian Figure Skating Open officially kicked off at the Beijing Capital Gymnasium. The Open has four events and a total of 32 athletes from 9 countries and regions have signed up for the competition.

Take the ice project as an example. In order to ensure the quality of the ice surface, each venue combined with the recommendations of the International Winter Sports Federation, inviting top experts in the industry and Chinese personnel to form a professional team, and the effect is remarkable.

The Japanese star Yukyama Yu who participated in the figure skating test sighed: "You can really feel the atmosphere of the Winter Olympics here, and the ice is very conducive to skating."

The 2021-2022 FIS Snowboard and Freestyle Ski Obstacle Chase World Cup completed the athletes’ departure on November 29, marking the successful conclusion of the first international test match in the Zhangjiakou division of the Beijing Winter Olympics.

On November 20th, at the Yunding Ski Park in Zhangjiakou, Beijing 2022 Winter Olympics, the second shaping of the track was completed, and all pre-match preparations were basically ready. Welcome to Beijing 2021/2022 International Snowboarding and Freedom -Style ski obstacles chasing the arrival of the World Cup.

This test game conducted a comprehensive simulation and inspection of the running status of the Yunding Stadium during the game, and received good evaluations from the stadium to the logistics support.

On November 28, a comprehensive exercise that simulated the "one day in the competition" of the Winter Olympics was held.

The simulation time for the exercise is February 7 next year. On this day, the Beijing Winter Olympics will launch nearly 20 events with 6 major events and 12 sub-items.

At the same time, there were also emergencies such as epidemic prevention and control, competition schedule changes, athlete injuries, equipment failures, and traffic accidents...

On August 5, a sculpture of the emblem of the Beijing 2022 Paralympic Winter Games stood on the ramp at the southwest corner of Jinyuan Bridge, West Fifth Ring Road, Beijing.

On this "busy" day, the dispatch center of the Beijing Winter Olympics and Paralympic Games operation headquarters methodically, together with the relevant fields of the three major competition areas, handled more than a dozen emergencies that were prone to and frequently occurred during the Winter Olympics.

Juan Ann Samaranch, chairman of the Beijing Winter Olympics Coordination Committee of the International Olympic Committee, delivered a video speech, fully affirming the effectiveness of the comprehensive exercise in command process, emergency response, communication mechanism, teamwork, etc., and said Since the test competition, the International Winter Individual Sports Federation and athletes have been very satisfied with the organization of various events and look forward to the upcoming Beijing Winter Olympics and Paralympics.

On the evening of November 23, the Zhangjiakou Winter Olympic Village of the Beijing 2022 Winter Olympics launched the first routine power load test and lighting ceremony.

The Winter Olympic Village at night is particularly warm and beautiful.

In the cold winter, the atmosphere of the Beijing Winter Olympics is getting stronger and stronger.

The test covered all areas in the village, and tested the full-load pressure of the lamps in 31 athlete apartment buildings and 22 commercial spaces in the square area.

In February next year, Winter Olympics athletes from all over the world will gather to show the results of their four years of hard preparation.

In order to build the best "stage", China has also made meticulous preparations for several years.

Looking forward to two months later, this ice and snow event can live up to everyone's expectations and become a new and exciting chapter in the history of the Winter Olympics!