The father of five Lewicki can take the fourth gold: "Not sacrificed anything"

In nine Allsvenskan seasons, Oscar Lewicki has never played so few matches as this year. Yet he has never been as good as he is now. On Saturday, he will probably become Swedish champion with Malmö FF for the fourth time. - I think I have become even smarter on the pitch, he says. 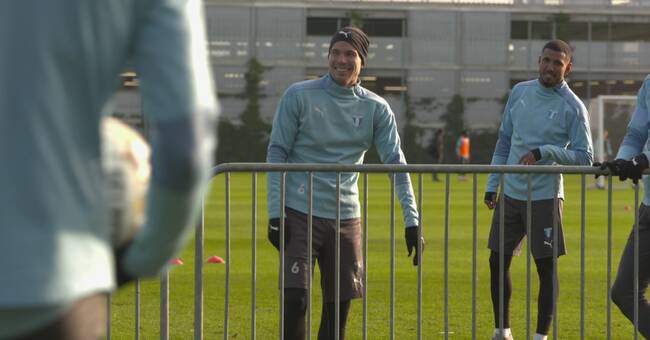 He has only come into play in a third of the matches this season.

When he returned from the year's first and longest injury break this summer, he did so well that Janne Andersson took him out of the World Cup qualifying squad.

From the favorite place in the inner midfield, he led MFF through the Champions League qualifiers before a new injury kept him off the field for another two months.

Despite pauses, many say he has been better than ever once he has played.

- I think I have become even smarter on the pitch.

It makes me dare even more, it in turn allows me to show even more of what I can.

It feels like I've really found a recipe to play even better.

It may not be completely common when you are a father of five at the age of 29, but it feels like I really scored right this year.

Are you better than ever?

- Yes, I actually think so.

- It was a few weeks ago that they went on RS virus.

Our youngest, who was only a month old, had to be hospitalized.

Then I missed the Sirius match in the Allsvenskan because of that.

Otherwise we have done quite well.

An eventful autumn for Oscar and Sofia Lewicki who a couple of months ago had their fifth child.

- Somewhere you feel a little yourself where the border goes.

If the children are sick, I can not be home and babysit because of it.

Luckily, I have Sofia who is at home and on maternity leave and therefore can take care of them.

- But in extreme cases like now when our youngest was admitted, the club has full understanding.

They really only showed love during the days when it was at its worst.

Then you also feel an even greater love and gratitude for the club.

It was great action from the players, the leaders and everyone around.

"Extremely happy from the first moment"

The love for his hometown and the club he came to as a 13-year-old is overwhelmingly obvious when talking about career choices with Oscar Lewicki.

He should have been able to move to bigger clubs and after fatter salary envelopes a long time ago.

- I do not think I have sacrificed anything.

To be able to play at the level I have done with Malmö is what I want.

I want to play for the gold, win matches and play in Europe.

I have been extremely happy since the first moment.

When you feel that feeling, it is also very fun to play football.

As long as Malmö FF does not lose at home against Halmstads BK at the same time as AIK wins its match in the Allsvenskan final on Saturday, Malmö FF will be Swedish champions for the 22nd time.