China News Service, Houston, November 30th. Title: The unusual Houston World Table Tennis Championships: "Ping Pong Diplomacy" and "World Sharing" in the Epidemic   China News Agency reporter Liu Guanguan   In late November, it is the Thanksgiving holiday in the United States. Dozens of Christmas trees have been erected in the window on the first floor of the George R. Brown Convention Center 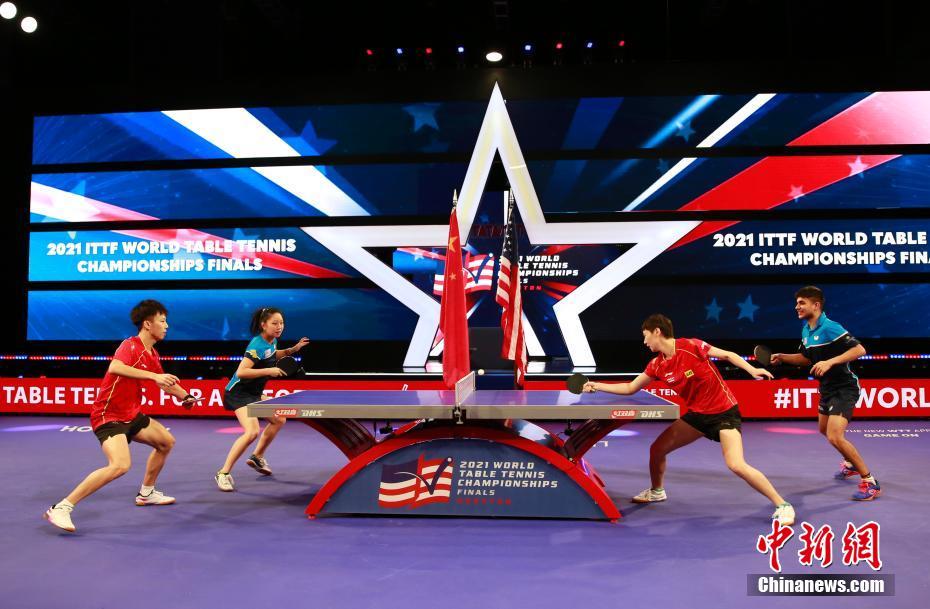 In late November, it is the Thanksgiving holiday in the United States.

Dozens of Christmas trees have been erected in the window on the first floor of the George R. Brown Convention Center in Houston, and flashing neon lights attract passers-by.

Most people who wander in the festive atmosphere do not know that on the third floor of the Convention Center, a top table tennis tournament is in full swing.

From November 23 to 29, the nearly "hundred-year-old" World Table Tennis Championships came to America for the first time.

The event held in the "extraordinary period" presents some different situations in the past, and people and things have unusual meanings.

On the day before the start of the competition, a dozen photojournalists gathered in the press center as they used to cover large-scale events.

The news director introduces the four rules that journalists must follow during the event.

When announcing the rules one by one, the news director suddenly raised his voice and said to a photojournalist: "Excuse me, sir, please wear a mask." Then he turned to everyone and continued: "We still have a consistent rule. You must wear a mask at all times in the venue."

The number of reporters for this World Table Tennis Championships may be the lowest in recent decades.

Including the finals, in the photojournalists' booth, the crowded scene that the news director was worried about did not appear.

The same is true in mixed interview areas where journalists usually "get together".

In the press center of the Houston World Table Tennis Championships, he stretched out a hand and said to a reporter from China News Agency: "This time there are only five."

Also affected by the epidemic are table tennis equipment vendors.

At each World Table Tennis Championships, major table tennis equipment vendors will set up booths around the stadium to attract customers and promote their products at relatively affordable prices.

However, outside the Houston World Table Tennis Championships, a staff member of an equipment supplier told a reporter from China News Agency that under the epidemic, international shipping costs have increased by 6 to 7 times, but the equipment cannot be increased in price, which adds to their sales in the United States. Little pressure.

But for the four young people who participated in the Sino-US transnational mixed doubles combination, this World Table Tennis Championships will leave a very special memory for their careers.

Before the start of the current World Table Tennis Championships, the ITTF announced that Chinese and American players will be matched across countries and compete in mixed doubles competitions.

As soon as the news came out, these four athletes became the focus of attention of all parties.

On the evening of November 22, they had a joint training in the main stadium.

The new partners communicate with each other from time to time, with a relaxed expression.

Liu Guoliang, chairman of the Chinese Table Tennis Association, said that the significance of this World Table Tennis Championships is extraordinary, and it is held on the occasion of the 50th anniversary of "ping pong diplomacy."

At the same time, I hope that the athletes will attract more spectators from both countries to cheer for the game with their superb performance and skills.

In the mixed doubles quarter-finals, Gombos in the auditorium kept shouting "Lin, Zhang, come on!" in non-standard Chinese. The 44-year-old Gombos was once a table tennis player and immigrated from Romania in 2004 To the United States.

He told reporters that after hearing the news of the Chinese and American partners participating in the competition, he thought of the "ping-pong diplomacy" 50 years ago.

Gombos said it is a wonderful thing to see these two countries join together to participate in the competition.

On November 28th local time, Lin Gaoyuan (left) and Zhang An were in the game.

Wang Manyu and Kanak stopped in the top 16 mixed doubles, while Lin Gaoyuan and Zhang An rushed all the way to the top 4 and won a bronze medal.

This is after the 1959 World Table Tennis Championships in Dortmund, the United States table tennis team once again won medals in this event.

At the award ceremony, the pair entered the hall with the national flags of China and the United States in hand, and the audience burst into applause and cheers.

Zhang An said that he was very happy to win a medal and felt his "dream come true".

"This is just a sports competition, but at the same time it surpasses sports and conveys hope to the world." Zhang An said after the game.

Ni Xialian told a reporter from China News Agency that for this World Table Tennis Championship, she trained a total of three times, each for an hour and a half.

"The focus of young athletes before the competition is training, and my main task is to ensure that there is no physical problem." Ni Xialian said frankly, "Young athletes want to get results, it is pressure. My mentality is different, I play because of Fun."

On the 28th, in the women's doubles semifinals of the 2021 World Table Tennis Championships in Houston, USA, Luxembourg combination Ni Xialian/Denut lost to Chinese combination Sun Yingsha/Wang Manyu and won a bronze medal.

Although she insisted on playing for so many years for "fun", Ni Xialian, who was on the field, would still open her eyes and go all out.

In the doubles arena, Ni Xialian led his teammates all the way to the top 4.

In the semi-finals, facing the Wang Manyu/Sun Yingsha combination who later won the championship, the Luxembourg combination quickly lost 0 to 3 and won a bronze medal.

This is also the first World Table Tennis Medal in Luxembourg's history.

Nearly 40 years later, she will be on the podium of the World Table Tennis Championships. The mask with the Chinese characters "China Table Tennis World Sharing" can't hide Ni Xialian's smile. The Luxembourg partner next to her also wears the same mask, smiling shyly.

It was Ni Xialian's encouragement that allowed the 29-year-old European girl to continue her ping-pong career together.

Ni Xialian told reporters that in fact, she herself wanted to “hang up” many times, but the Luxembourg Table Tennis Association’s kind invitations again and again kept her active in the international arena.

At present, Ni Xialian still does not want to put down the racket.

In her mind, "The feeling of being needed is also very happy." (End)