Harvest of the Arab World Cup .. A big win for Algeria, Morocco and Egypt achieved the most important, and Jordan surprised Saudi Arabia

The second day of the Arab World Cup, hosted by Qatar, witnessed a great victory for Algeria over Sudan 4-0, a result that Morocco overcame Palestine, while Egypt achieved a difficult victory over Lebanon. 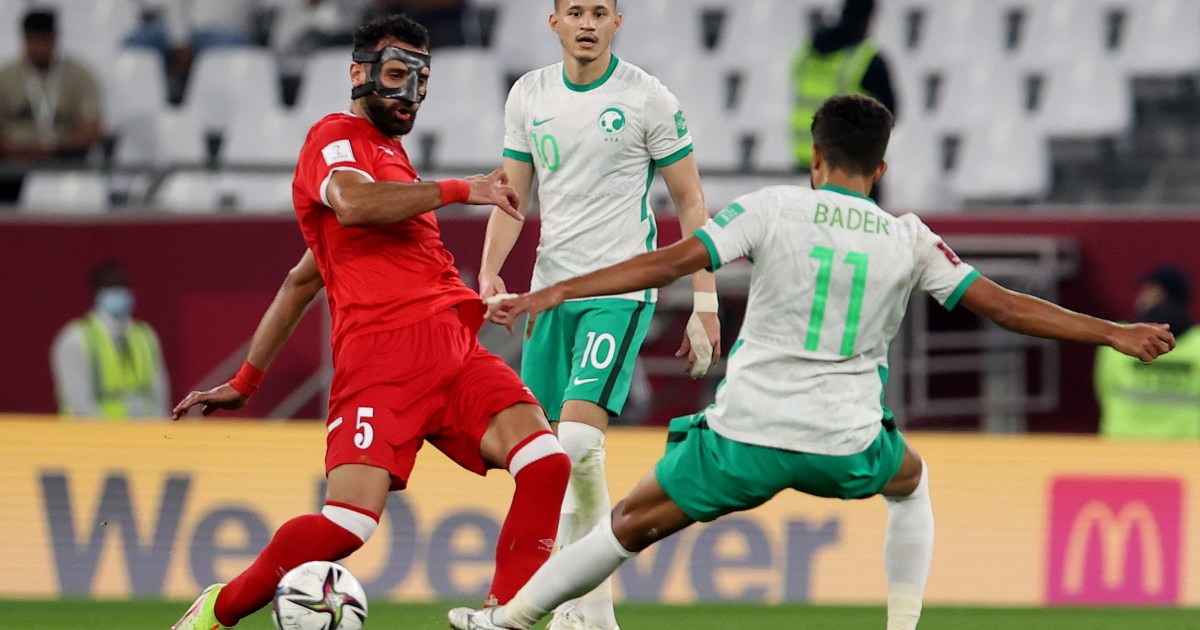 The second day of the Arab World Cup, hosted by Qatar, witnessed a great victory for the Algerian team over Sudan 4-0, a result that the Moroccan team outperformed its Palestinian counterpart, while the Egyptian team achieved a difficult victory over Lebanon with a penalty kick, and the Jordan team snatched a victory Whatever from Saudi Arabia.

The day began with the match between Algeria and Sudan at Ahmed Ben Ali Stadium, where the team led by Majid Bougherra, the local coach, instead of Djamel Belmadi, the coach of the first team, advanced 3-0 in the first half thanks to Bounedjah's double and the goal of defender Jamal Belamri.

Algeria, which depends on a group of locals and professionals in Arab clubs, completed the quartet at the beginning of the second half through El-Arabi Hilal Soudani.

Algeria spared its efforts during the second half, allowing Sudan to obtain a penalty after a foul by Belamari, but goalkeeper and captain Rais Mbolhi saved Mohamed Abdel Rahman's kick in the 70th minute.

Algeria topped Group D with 3 points, with a goal difference from Egypt, which beat Lebanon at Al Thumama Stadium.

Al-Ahly midfielder Mohamed Magdy "Qafsha" scored the winning goal from a penalty kick in the 71st minute, which the referee awarded after Ahmed Fattouh was fouled inside the penalty area of ​​Lebanon, to put the ball to the right of Mustafa Matar, Lebanon's goalkeeper.

Egypt midfielder Hamdi Fathi was injured ten minutes before the end of the first half, to leave the field and be replaced by Muhannad Lashin.

Next Saturday, Egypt will play Sudan, while Algeria will meet Lebanon in the second round of the group.

In the third group, the Moroccan team started its defense of its title with a great 4-0 victory over Palestine at Al Janoub Stadium.

Full-back Mohamed Nahiri put Morocco's second team in front after half an hour from the start, after a 25-meter shot deceived goalkeeper Omar Kaddoura.

Midfielder Abdelilah Al-Hafezi added the second goal in the 56th minute after a cross pass by Mohamed Al-Shaibi.

Al-Hafidhi scored his second and third personal goal for Morocco in the 64th minute with a shot after a through pass from Walid El Karti.

Morocco scored a fourth goal in the 70th minute through substitute Walid Azzaro, but the referee canceled it after using the video assistant referee technology, due to the presence of offside.

Captain Badr Bannoun completed the Moroccan quartet in the 87th minute, with a penalty kick awarded to substitute Sofiane Rahimi.

Morocco topped Group C with 3 points, with a goal difference from Jordan, which won a difficult victory over Saudi Arabia with a single goal.

Mahmoud Mardi scored Jordan's only goal in the 62nd minute.

Despite the numerical shortage, the Jordanian team is ahead of the Saudi team #Arab_Cup |

The match witnessed the expulsion of Ihsan Haddad, the player of Jordan, and Khalifa Al-Dosari, the defender of Saudi Arabia.

The decision to expel Ihsan Haddad came in the 53rd minute after a strong intervention against Turki Al-Ammar, while Al-Dosari received the second yellow card in the 73rd minute due to a similar intervention he made against Baha Faisal, the Jordan player.