Chinanews client, Beijing, November 30th (Reporter Wang Yu) Raised his arms and shook hands with his opponents. After a calm game, Fan Zhendong won the first World Table Tennis Championships men's singles champion in his career. middle. After eight years of sharpening the sword and the end of the first battle, this man's highest honor in the ping-pong world is a matter of course for him.   Beij 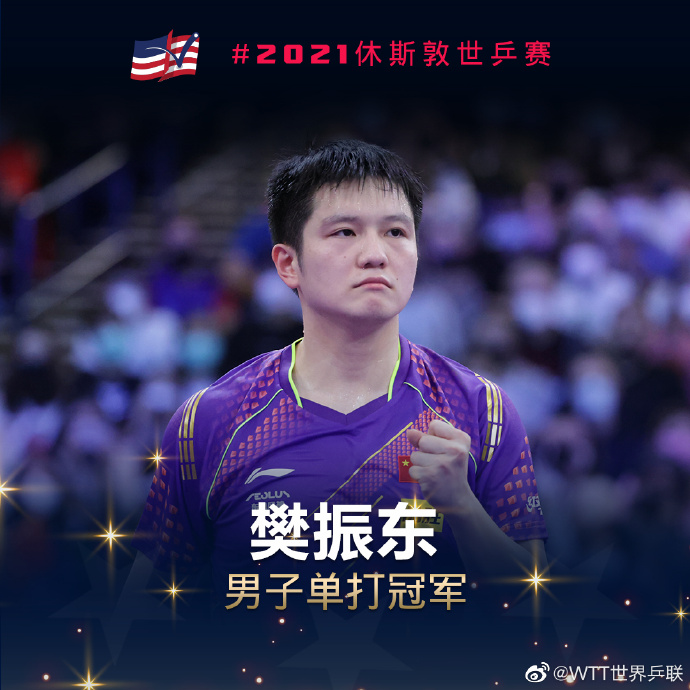 After eight years of sharpening the sword and the end of the first battle, this man's highest honor in the ping-pong world is a matter of course for him.

After Fan Zhendong swept Sweden's "00" in four straight games, the teenager Moregarde won the coveted championship in his 24-year-old year.

When Fan Zhendong and coach Qin Zhijian hugged tightly after winning, there may be countless fragments of memories flashing in his mind.

In 2013, when he was only 16 years old, he was excited to stand on the stage of the World Table Tennis Championships for the first time; in 2015, he faced the world's No. 1 Ma Long, who regretted his defeat; in 2017, he met Ma Long, who exhausted his best efforts, and became the runner-up. ; Until two years ago in Budapest, when the pressure in my heart was like a mountain, I was lost to Liang Jingkun...

On the same day, in the men's singles semifinals of the 2021 World Table Tennis Championships in Houston, USA, Fan Zhendong eliminated his teammate Liang Jingkun 4:1 and advanced to the final.

This is not the first time Fan Zhendong has stood in the men's singles final of the World Table Tennis Championships. The defeat four years ago seems to have become a watershed in his career.

But in this peak duel, Fan Zhendong, who played flawlessly, met Malone, who performed even more extreme, and could only get a bitter defeat in the end.

The CCTV commentator commented at the time: Ma Long wins experience, but Fan Zhendong is the future.

In the men's team final of the National Games table tennis event, the Guangdong team defeated the Beijing team 3-1 to win the championship.

The picture shows Fan Zhendong celebrating after his victory over Ma Long.

However, compared to the illusory future, the final two goals in the 7th game with Malone were disappointed, which not only made Fan Zhendong clenched his fists and cried secretly after the game, but also realized the victory more than ever before. Pressure.

Two years later, the contrast between the two still follows.

However, the invisible pressure on Fan Zhendong from the benchmarking Malone finally made him lose in the match against Liang Jingkun. The expectation of himself caused Fan Zhendong to bear a heavy burden, leading to "the psychological bottom line was easily hit." Wearing”, once again hit the World Table Tennis Championships champion can only end in a hasty.

Liu Guoliang, who hates iron but not steel, pointed out Fan Zhendong's shortcomings sharply, "Don't have only Ma Long in your eyes, you must focus on the world and the future."

In the men's singles final of the Tokyo Olympics table tennis, Ma Long defeated his teammate Fan Zhendong to win the championship.

But how to find the new positioning and goals, understand and digest the pressures he faced, Fan Zhendong spent a whole season to run in, and also paid a considerable price, even beyond his imagination.

Afterwards, Fan Zhendong frequently lost the foreign wars, and even lost his 15-month-old world No. 1 until the German Open regained the men's singles championship after a lapse of nearly a year.

Two years later, Fan Zhendong, who competed in the World Table Tennis Championships for the fifth time, had a completely different mood.

At the Tokyo Olympics, Fan Zhendong won the championship with Ma Long and Xu Xin's men's team, and was crowned Olympic champion for the first time in his career. At the National Games, he stood on the men's singles highest podium and achieved achievements that many predecessors could not match.

In the Houston World Table Tennis Championships, Fan Zhendong defeated Wang Chuqin, Lin Gaoyuan, and Liang Jingkun one after another. He fought from the half-zone with strong enemies like Lin. It is an undoubted strength to stand in the finals, and it is also a tenacious will.

As Fan Zhendong once said, “Each game is a fresh start for him. No matter how big the score or the thrilling score of the first few games, the next thing to do is to restart the next game.”

For Fan Zhendong, he has reached the best time to start the "Fan Zhendong Era".

Facing the pressure now, Fan Zhendong, who is becoming more mature, said that his mentality should be cleaner and purer—"Many things are not something you can get, but you need to pay and do more."

But in any case, at this moment, Fan Zhendong needs to enjoy only a sound victory; what belongs to Fan Zhendong will be the real future.