Sweden drove over Finland in the World Cup group final

9-3. Sweden drove over Finland in the group final of the floorball WC. Now either Norway or Latvia are waiting in the quarterfinals. 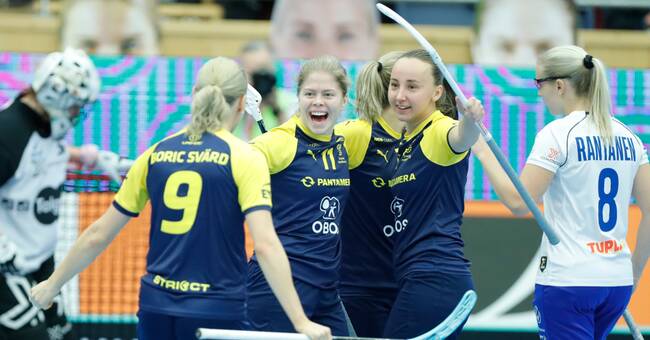 Sweden is chasing its eighth straight World Cup gold on the women's side and has had a dream start to the championship at home in Uppsala.

After a 22-3 victory against Slovakia and 20-0 against Germany, the third straight victory came in the big meeting with arch-rival Finland.

Sweden got off to a dream start and went from 3-0 in the first period, where the 3-0 goal was extra nice.

Blågult won the ball on their own half of the field, clap-clap-played until the offensive box where Klara Loneberg freely lifted the ball into goal.

At the same time, criticism was directed at Finland.

- Sweden comes out strong and does well, I am a little disappointed with Finland's first period, said Wijk, who was supported by expert colleague Mattias Samuelsson.

- I am surprised that Finland does not offer better resistance.

Sweden has been classes better in the first period.

Sweden continued to convince and increased to 7-1 in the second period, before Finland reduced twice at the beginning of the third in the pursuit of a turnaround.

But Sweden's victory was never threatened and now the quarterfinals await on Thursday 18.00 against the winner between Norway and Latvia who make it to the playoffs.