A funny shot in the Arab World Cup.. Iraq's coach storms the pitch to prevent a player from taking the penalty kick

The coach of the Iraqi national team, Zeljko Petrovic, stormed the field to prevent Ayman Hussein from taking the re-missed penalty kick for the first time, during the match between Iraq and Oman in the Arab World Cup in Qatar today, Tuesday. 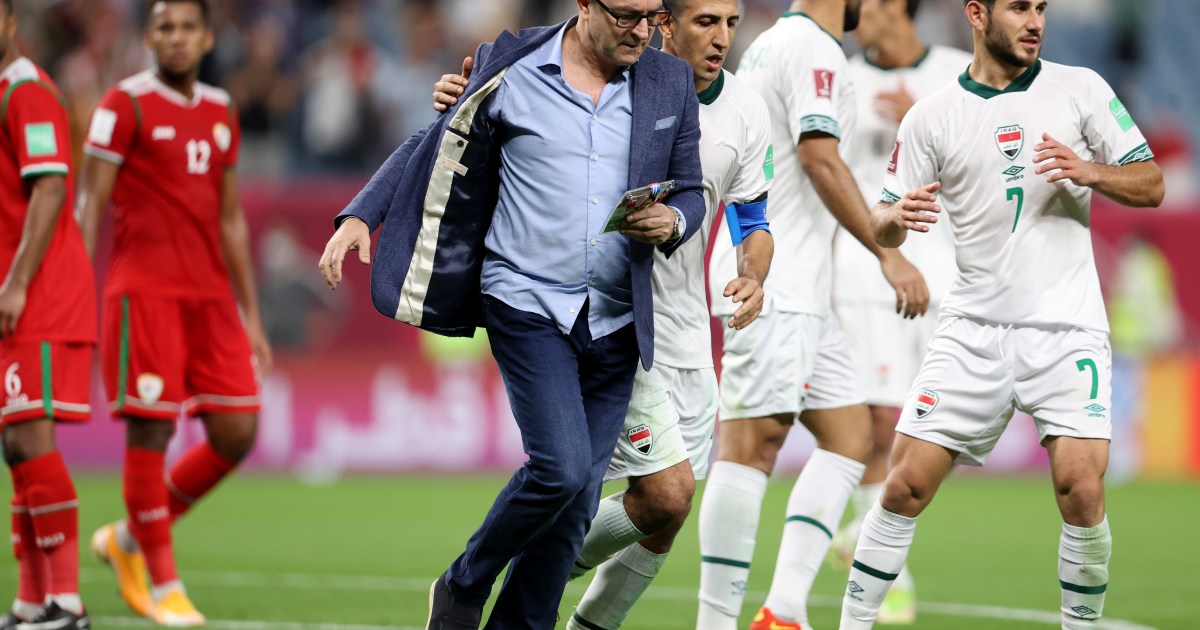 The coach of the Iraqi national team, Zeljko Petrovic, stormed the field to prevent Ayman Hussein from taking the re-missed penalty kick for the first time, during the match between Iraq and Oman in the Arab World Cup in Qatar today, Tuesday.

A video clip spread on social networking sites of Petrovich while he was inside the Oman penalty area and angrily directed his words to the player Hussein, so that he would not carry out the penalty kick that the referee decided to return after the Omani goalkeeper moved from his place before it was executed and confronted it.

After giving his directions, one of the Iraqi players accompanied the coach to go outside the field, with no decision taken against him by the match referee, who was focused in the penalty shoot-out and talking with the players.

Watch #Iraq coach Petrovic go to the stadium to prevent player Ayman Hussein from taking the penalty kick back after wasting the first time..# Mundial_Arab pic.twitter.com/JUA408Kngf

And the penalty kick was carried out by another player - according to the coach's desire - which is the player Hassan Abdul Karim, who managed to score, to achieve a 1-1 draw for the Iraqi team in the calculated time instead of the lost time of the meeting.

Tweeters interacted with the snapshot, describing it as "the strangest and funniest snapshot" on the first day of the Arab Championship, as one of the tweeters wrote commenting, "The first oddities and antics in the Arab Cup."

"The strangest shot 📸" with the first day of the #Arab_Cup..

The coach of the Iraqi national team was not satisfied with the instructions on the line.. He reached the nearest point of the player to prevent him from repeating the implementation # Oman_Iraq

The first oddities and antics in the Arab Cup, the

coach of Iraq went to the stadium to prevent Ayman Hussein from taking the penalty kick against Oman after he missed it for the first time 😅#FIFArabCup pic.twitter.com/ZX33zePged

The coach of Iraq went to the penalty area of ​​the Oman national team, shouting at someone because the penalty kick will be repeated and I don't want to hit it where 😂 I love our randomness very seriously 😀 #Arab_Cup pic.twitter.com/6P00mhsYgB

A coach who feels his heart on the team, and Jay coaches not playing

I love this type of trainer who loves 🥰 his work and masters it sincerely #Iraq_Amman https://t.co/fM2pOLqpv9

On the other hand, Omani fans wondered why the coach was not punished by the referee despite storming the field in this way. An Omani tweeter said, "I ask you, the match between our national team and Iraq, why did the referee not expel the coach of Iraq when he entered the stadium?"

I ask you the match of our national team and Iraq, why did the referee not expel the coach of Iraq on the day he entered the stadium😤

Where did the jury deal with this rocky shot?

The coach of the Iraqi national team thinks he is participating in a Ramadan tournament, not an international tournament organized by FIFA.

Zeljko Petrovic - who succeeded Dutchman Dick Advocaat earlier this month - apologized for the incident, and said in a press conference that he wanted to give confidence to the player Abdul Karim "because of my belief in his abilities as a young talent, and he will be one of the stars of Iraqi football in the near future."

He added, "As for the second apology, I present it to Ayman Hussein, despite my high confidence in his capabilities, the issue of executing the second penalty kick was a high degree of sensitivity. A crisis that is indispensable.

Petrovich called on the Iraqi media to shed light on the crises the game is going through in the country, especially the declining physical fitness of the local league players.

"Most of the players face suffering in completing the match, so you find many injuries," he said. He also called for attention to the pitches in Iraq;

Because it is "one of the ingredients for the players' success and the development of their performance."