Tonight, Truls Möregårdh will play the WC final in singles, and Mattias Falck / Kristian Karlsson the WC final in doubles. Now comes a message of joy for all Swedish table tennis fans: SVT Sport will broadcast the two finals with Jan-Ove Waldner as expert. 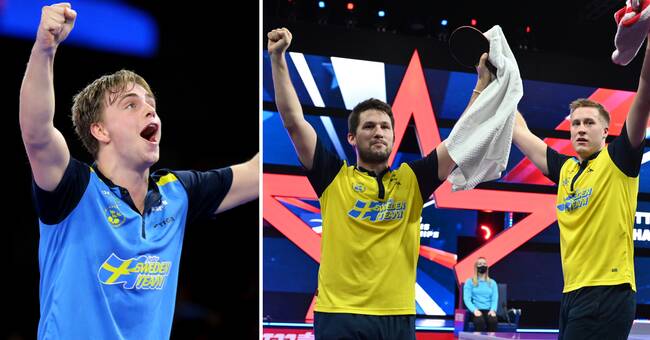 For the second world championship in a row, a Swede has at least silver in men's singles at the WC, Mattias Falck managed it in WC 2019. Möregårdh is also the first Swedish teenager to win a medal at ping-pong WC since Stellan Bengtsson won gold fifty years ago in Nagoya 1971.

Before the World Cup, the 19-year-old was ranked number 77 in the world.

When Joo Se Hyuk from South Korea played the World Cup final in 2003, he was ranked around 65, which makes Möregårdh the lowest ranked player ever to have reached a World Cup final.

Earlier in the night, the Swedish doubles pair Mattias Falck and Kristian Karlsson also reached the final after defeating Liang Jingkun and his doubles partner Lin Gaoyuan with three straight sets in the semifinals.

It is now clear that SVT Sport will broadcast both finals.

Chris Härenstam comments on the finals with the legendary Jan-Ove Waldner as an expert.

- We may be able to participate and experience one of the greatest Swedish sporting achievements.

A 19-year-old who is ranked 77th in the world will face the world setter.

It's David vs. Goliath, he has just about everything to gain.

It will be a fantastic match, says Chris Härenstam.

CLIP: Truls Möregårdh on to the WC final