Unsuccessful return: how Emelianenko lost to Santos by a choke hold and asked for revenge

Alexander Emelianenko lost to Marcio Santos in the main match of the AMC 106 Fight Nights tournament in Syktyvkar. The Brazilian had a tangible advantage during the starting round, and in the fourth minute he carried out a choke triangle and forced the opponent to surrender. Having suffered the ninth defeat in his career, the veteran asked his opponent for revenge, and he said yes. In turn, Santos challenged Magomed Ismailov. 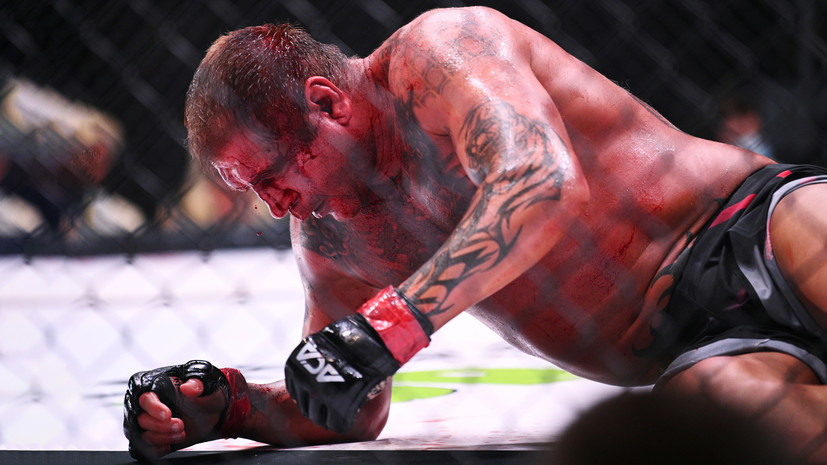 The most scandalous fighter of Russia, Alexander Emelianenko, despite all his popularity, has recently been perceived by many only in connection with pop MMA.

It seemed that it would be difficult for the veteran to return to a serious level, and in the near future he will meet with opponents of the level of Dzhigan and Vyacheslav Datsik.

All the more unexpected was the proposal to the 40-year-old athlete to replace Vyacheslav Vasilevsky in the main duel of the AMC 106 tournament with Marcio Santos.

I was also surprised by the quick consent of the ex-PRIDE representative himself to replace him on a short notice.

Questions also raised that Emelianenko was to meet with the nominal average weight.

True, in a meeting with Magomed Ismailov, the difference in anthropometric data did not help him.

At the weigh-in ceremony, Alexander turned out to be the heaviest by only 11 kg: 115 against 104. The athlete even boasted on Instagram that over the past two months he had lost eight kg.

One way or another, it was striking that despite the absence of a training camp, he added after defeating Artyom Tarasov.

Not without a proprietary non-aggressive trash from the veteran.

He recorded a video message to his opponent, in which he promised to teach him "to fly over the cuckoo's nest."

“I have lost weight thanks to proper and balanced nutrition from sponsors who feed me.

Now my form is better than before the fight with Ismailov, ”Alexander said in an interview with journalist Alexander Lyutikov.

In turn, the Brazilian admitted that he does not see "anything special" in the Russian.

“I am surprised that Emelianenko became my rival.

He has good boxing, but I don't see anything special in mixed martial arts.

Alexander is not an MMA fighter, he only fights.

Fighting with him is a business, as well as fights with Alexander Shlemenko and Artur Guseinov.

I had a good and hard fight with Huseynov.

And with Shlemenko it was the same, "- quotes the words of Santos" Sport-Express ".

However, regardless of the outcome of Emelianenko's fight in Syktyvkar, the full support of the fans was ensured.

The filled arena greeted his appearance with thunderous applause and an approving whistle.

Santos, on the other hand, amused the audience a lot, coming out to the well-known composition "Districts-Quarters" performed by the pop-rock group "Beasts".

Already in the "cage" it became clear how great the difference between the rivals in size was.

If in weight the Brazilian was not so much inferior to the Russian, then in height he lost as much as 20 cm. At the same time, it was striking how Alexander “dried out”, and how much smaller his belly became.

As expected, the Brazilian started the fight quite actively.

He constantly moved across the canvas, not giving the opponent the opportunity to aim and deliver the trademark knockout blow.

He did not miss the opportunity to throw low-kicks.

It was felt that after the confrontation with Tarasov and Mikhail Koklyaev, the level turned out to be prohibitive for him.

After a couple of minutes, he still answered with a series, after which a standing fight ensued at the net.

It was no coincidence that the Brazilian said that he did not consider his opponent an MMA fighter, since he exclusively boxed, and therefore did not seek to spend the entire fight in a standing position.

It is all the more surprising that Alexander himself transferred the fight to the ground. He tripped a significantly inferior opponent in height and tried to crush him with a mass. Marcio gave the neck, but Emelianenko, who was never strong in the fight, did not get any benefit from it. Further, the advantage has already completely passed to Santos.

He tried to carry out a painful one on his leg - the Russian fought back. Immediately, the Brazilian went to the mount and began to shower his opponent with blows. It became obvious that his victory was a matter of time. Santos did not wait for the break, especially since he had additional motivation, which the fighter spoke about later. At 23:00 (Moscow time) his favorite football club Flamengo was supposed to start the final match of the South American counterpart of the Champions League Copa Libertadores with Palmeiras. The avid fan was in such a hurry to catch the starting whistle that in the fourth minute he made a choke triangle. Alexander could only surrender.

Thus, the return to a serious level turned out to be unfortunate for him.

The veteran suffered his ninth career defeat and his second in a row.

Moreover, in both cases, he lost to the average weights.

The 40-year-old athlete remains to be praised for his courage and consent to come out on short notice.

But four minutes in the "cage" with Santos rather confirmed that Emelianenko would be more comfortable in pop MMA.

It is important that Alexander himself believes in his own strength.

After the failure, he quoted his older brother Fedor, saying the phrase "He who did not fall, did not get up," and asked the Brazilian to meet again.

“The opponents I beat always asked me for revenge.

Santos accepted the challenge and promised the Russian to "beat him again."

Immediately after stopping, he began to applaud his opponent, and then fell to his knees and began to cry.

Having come to his senses a little, he hugged Emelianenko and began to explain to him in bad English that in childhood and adolescence he was an idol for him.

You can understand the behavior of the Brazilian, because the victory even over the legend of domestic MMA, which is at the end of his career, has seriously increased his shares in Russia and will help to earn much more money in the near future.

Earlier, he had already beaten Huseynov and lost to Shlemenko only by a rather controversial decision of the judges.

Now the foreign athlete intends to stop at the same revenge with Alexander.

He challenged Magomed Ismailov, who had recently yielded to Vladimir Mineev, and urged him to "get off the phone."

The confrontation between two powerful middleweights can turn out to be interesting, especially since both beat Emelianenko.

It remains only to wait for the answer from the Bald Predator.