Cold triumph: Russian skiers took the first four places at the KM stage after the Norwegians refused to run in the cold

Alexander Bolshunov won the first victory in the new World Cup in cross-country skiing and topped the overall standings of the competition. He won the 15 km pursuit speed skating race in Finnish Arm. The race took place in severe frost, which is why the entire Norwegian team did not go to the start. Russians Sergey Ustyugov, Artyom Maltsev and Ivan Yakimushkin finished after Bolshunov. In the women's competition, Yulia Stupak and Tatyana Sorina could not complete the race, and Natalya Nepryaeva finished 12th. 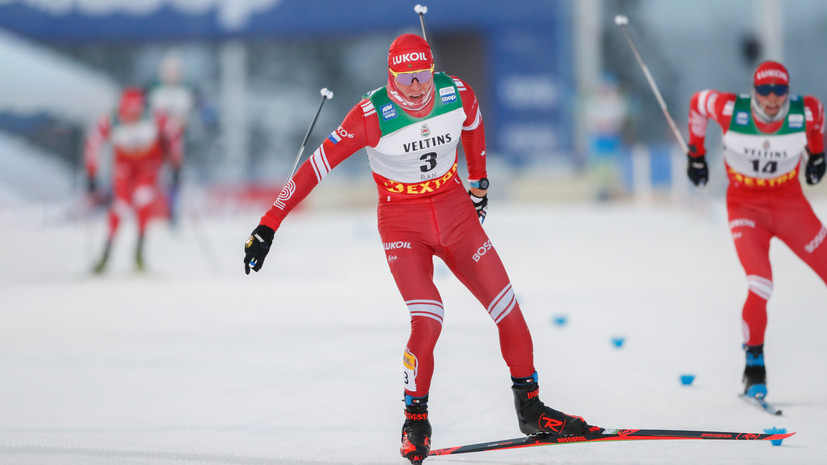 "Championship of Russia" at the World Cup

On the last day of the starting stage of the World Cup in cross-country skiing in Ruka, the weather presented the athletes with an unpleasant surprise.

The day before, the air temperature dropped significantly, and on Sunday it crossed the threshold of -20 ° C, at which the competition can be canceled.

The judges began to frantically decide what to do with the free style pursuit races - to release the participants on the track or still protect them from the frost.

As a result, it was announced that the women's 10 km race will be postponed to a later time, and before it will be a race among men, whose distance is 5 km longer.

Not all skiers liked this decision.

The winner of Saturday's cut Iivo Niskanen and the entire Norwegian team refused to run in such extreme cold and did not go to the start.

So from the first dozen athletes, half of the participants disappeared at once.

Only Russian skiers remained to fight for medals.

The World Cup seemed to be postponed a year ago, when the Norwegians did not compete due to the coronavirus pandemic.

This allowed Russian skiers to take five first places at once, as happened at the stages of the Tour de Ski.

Now they have a chance to even surpass this result.

By the way, the frost turned out to be so strong that even the equipment went into refusal.

Electronic malfunctions prevented the start of the race on time, as a result of which the athletes were stopped and sent to warm up.

When the judges gave the command to start abruptly, Alexander Bolshunov could not quickly react to it.

At the time when he had to go the distance after Alexei Chervotkin, he still put on skis and gloves.

At the distance, a leadership group of five Russians was immediately formed - Sergey Ustyugov, Ivan Yakimushkin and Ilya Semikov joined the prize-winners of the Saturday race.

The closest foreign rivals Antoine Cyr from Canada and Hugo Lapalu from France were losing about 40 seconds after 2.5 km.

Maltsev really wanted to catch up with his compatriots and play medals with them, and he began to vigorously reduce the gap.

The leaders didn't seem to mind being joined by a teammate and slowed down.

In the middle of the distance, Maltsev reunited with the team, but he also brought Novak and Bögl with him.

However, the presence of two skiers, who never finished in the top ten of the World Cup distance races, hardly frightened the Russians.

Up to the 12.5 km mark, there was a real chance that the Russians would take six first places in the race.

However, soon Chervotkin lagged behind the group - his equipment also could not withstand extreme conditions.

After him, Semikov fell off along with Bogle.

Novak resisted almost to the end and even tried to lead on the descent, but in the end, four Russians remained to compete for places on the podium.

Ustyugov almost turned out to be superfluous, who was almost left on the last climb, but an experienced skier managed to hold on.

In the finish line, he ended up with Bolshunov and Maltsev, and Yakimushkin had to be content with fourth place.

As a result, gold went to the current winner of the World Cup, Ustyugov became the silver medalist, and Maltsev was rewarded with bronze for his spurt from the eighth starting position.

The race without many eminent rivals brought Bolshunov his 28th career victory in the World Cup.

In the won distance races, of which the Russian now has 24, he bypassed the Norwegian Peter Northug and climbed to fourth place in history.

According to the results of the competition in Ruka, Bolshunov became the leader in the overall and distance offsets in the World Cup, and Ustyugov rose to second place in both ratings.

Russians out of the top ten

In the women's race, there were also enough of those who decided not to run in the cold, but the favorites did not refuse such an opportunity.

All three leading Russian skiers also went to the start, but only one of them reached the finish line.

Yulia Stupak and Tatiana Sorina retired and could not claim to be in the top ten again.

It was difficult for Natalya Nepryaeva to achieve this.

In the race, she started 16th, more than a minute behind leader Frida Karlsson from Sweden.

As a result, the Russian skier won four positions, slightly losing to the current World Cup winner Jessica Diggins from the United States.

For gold, the struggle was unfolding between Karlsson and the Norwegian Teresa Johaug.

The Swedish skier held the lead for a while, but the 14-time world champion was not going to suffer a second defeat in a row.

Long before the finish line, she overtook Karlsson, and then created a comfortable gap for herself, which brought her the first gold of the season.

The third place was taken by another Norwegian Heidi Veng, who played seven positions from the start.