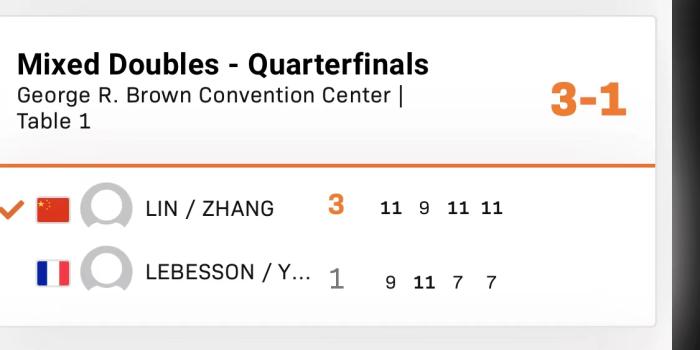 As the Sino-US mixed doubles combination enters the semi-finals, according to the competition system, the two have determined to win at least the bronze medal. This is also the first time since 1959 that an American table tennis player has reached the podium of the World Table Tennis Championships.

The realization of this new breakthrough is precisely due to the meeting of the China-US Table Tennis Association before the start of the game.

Although it is very close to the deadline for registration, after the joint efforts of all parties and the approval of the ITTF Executive Committee, the Sino-US mixed doubles match plan was finally realized.

Chinese athletes Lin Gaoyuan and Wang Manyu were paired with American players Zhang An and Kanak to participate in the mixed doubles competition.

Lin Gaoyuan has high expectations for the competition with Zhang An’s partner, “Zhang An is the number one in the US team, and our goal is to be the first. I hope we can quickly get into the state, cooperate with each other and achieve good results through hard work. "

The road to promotion for the two of them is gradually improving as Lin Gaoyuan had hoped.

Lin Gaoyuan and Zhang An are in the game.

The two cooperated more and more tacitly. After four rounds of fierce battle, Lin Gaoyuan/Zhang An eliminated their opponents 3:1 and advanced to the semi-finals of mixed doubles.

After the match, Zhang An, who won the first World Table Tennis Medal for the US team in 62 years, said that the two are now getting better and better together. I am very grateful to Lin Gaoyuan, "He is a very good doubles partner, and I am second. The game was very tense, but everyone comforted me and bit by bit."

When talking about cooperation with his partner, Lin Gaoyuan thought that after four games, they were very familiar with each other. "Zhang An played very well on the field, which gave me the feeling that everyone was integrated in doubles. ."

Zhang An said that he has learned a lot from Lin Gaoyuan and the Chinese team, "They are very professional, and they have analyzed well when preparing for the opponent, and I hope we can continue to move forward."

Although the cooperation time is not long, Lin Gaoyuan and Zhang An still managed to break into the semi-finals of the World Table Tennis Mixed Doubles. Netizens also praised and blessed them for their stable performance and tacit cooperation.

As the first Chinese and American mixed doubles combination to appear in the World Table Tennis Championships, Lin Gaoyuan/Zhang An has always been the focus of attention since the start of the tournament.

Every step of their advancement not only creates a history that belongs to the two, but also brings new breakthroughs to Sino-US sports exchanges.

Successfully qualifying for the World Table Tennis Championships Mixed Doubles semi-finals is definitely not the end for Lin Gaoyuan and Zhang An.

Just as Lin Gaoyuan expected before the game, winning the championship is also the common goal of the two.