Iivo Niskanen knocked out the opposition directly in the World Cup at home in Ruka. The Finn led the race from start to finish. For Swedes, the World Cup debutant Leo Johansson was the joy that took points in the debut. 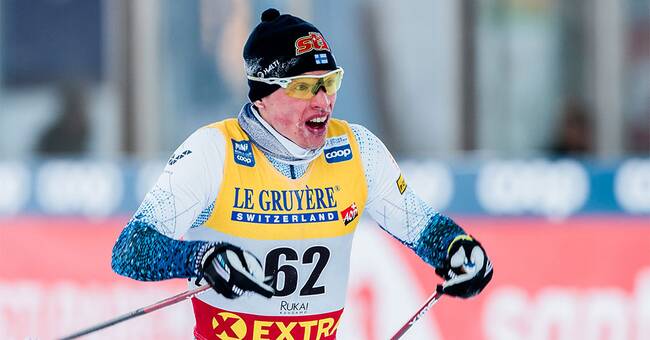 Now he has done it a fourth time.

- It feels good to be back on the podium.

The crowd was fantastic, it's great that we have that atmosphere.

They had forgotten how it usually is.

It helps us, especially here in Ruka, says Iivo Niskanen to SVT Sport.

Niskanen took the lead by almost eight seconds already on the first pass at 3.1 kilometers.

And that margin to the others he kept along the track.

In the finish, Niskanen was 8.3 seconds ahead of Russian Alexei Chervotkin.

Reigning World Cup champion Alexander Bolshunov could not beat Niskanen either and was distanced by 14 seconds at the finish line.

For the Swedish part, the World Cup debutant Leo Johansson made a clearly approved debut and was the best Swede in his 22nd place.

Maybe I stressed a bit on the steep slopes to get the skis fixed.

But I am satisfied, says Leo Johansson to SVT Sport.

The most experienced Swedish skier Calle Halfvarsson opened the best of the blue and yellow skiers, but fell back on the final lap and finished 35th.

- I'm not happy, but somewhere I'm not very disappointed either.

It's the last lap that I clap together and then the seconds run away.

I can not handle three laps right now, today I managed two laps.

Had I managed one more lap at that pace, it would have been a much higher position, says Calle Halfvarsson to SVT Sport.