Leksand broke Rögle's 16 match long points suite through the 4-1 victory in Ängelholm. - We are satisfied with the points and how we carry out the match, says Leksand's Patrik Zackrisson. 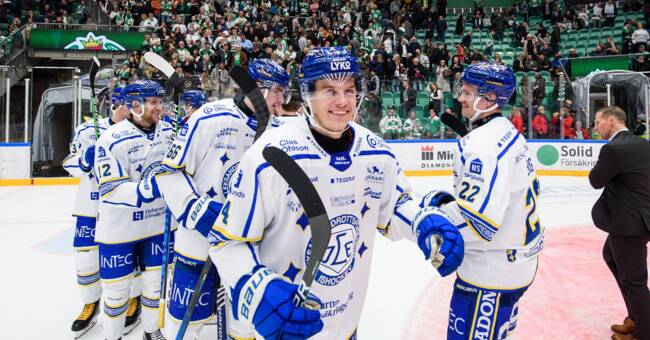 Before Saturday's SHL match, table runner-up Rögle had only lost two matches in regular time, the most recent was against Linköping on 30 September.

After that, the Ängelholm team scored points in 16 games in a row.

Leksand broke their losing streak after four matches when they beat Linköping 6-5 on penalties on Thursday.

- It was an important match, says Oskar Lang to C More about the last victory match.

With strengthened self-confidence and both Lang and Mikael Ruohomaa back after injuries, the valley men were able to stand up properly against Rögle.

It was an even and close match, but not very well played.

"We fight and toil"

The first goal came after 16 minutes of play in the second period through Justin Kloos.

At the beginning of the third period, both the second and third came.

Rögle took advantage of a numerical superiority, when they also picked out goalkeeper Calle Clang and played six against four.

After just seven seconds, Adam Tambellini made it 1-3.

However, the mood dropped for Rögle when Max Veronneau put 4-1 for Leksand two minutes later.

- We are happy with the points and how we carry out the match.

We fight and toil and fight for every meter, says Zackrisson to C More.

- We have a good match plan and implement it well.

Despite the loss, Rögle remains in second place in the table.

Before tonight's matches, Leksand is still in fourth place.

For Malmö, things are still tough.

With tonight's loss to Luleå, the team has lost six of their last seven matches.

Luleå won 4-0 at home and places in fifth place in the table.