Collapse of hopes: Russian singles disappointed at the Grand Prix stage in Sochi, but Kolyada made it to the final

Georgian figure skater Moris Kvitelashvili won the men's competition at the sixth stage of the Grand Prix in Sochi. Mikhail Kolyada took second place and thanks to this he became the only Russian singles skater who made his way to the final six of the championship series. Two other domestic representatives - Yevgeny Semenenko and Mark Kondratyuk - took the sixth and eighth lines, respectively. 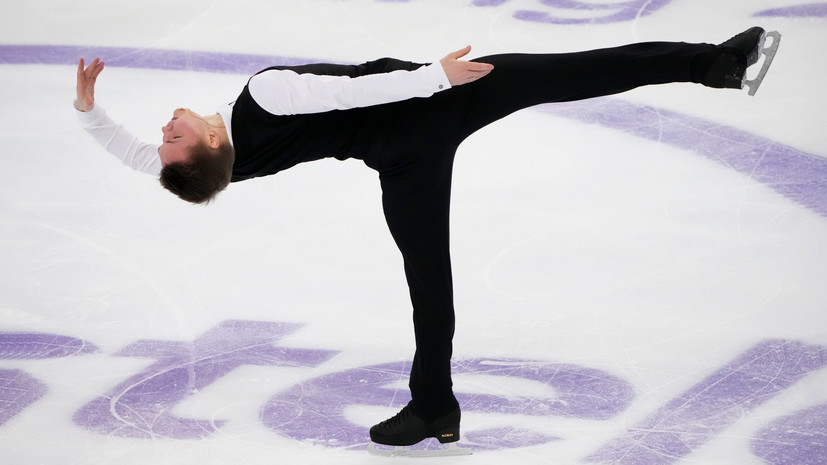 After the Russian singles skaters ingloriously finished their short program on Saturday, journalists, as usual, rushed to the speakers for comments.

One of them, four-time Russian champion Maksim Kovtun, lamented that domestic skaters definitely need to "drive themselves into the state of" you can't imagine anything worse. "

“At such moments, you feel that it cannot be worse, and you let go of yourself.

You leave with an empty head.

We have this problem from time to time - we all skate one program out of two, "- explained Kovtun.

The ex-skater did not formulate anything new.

The feeling that everything is already lost, and there really is nothing to lose, frees the head very much.

The athlete often begins to work as he used to in training, and the public, who managed to write him off from the accounts, remains perplexed: wow, but a person really knows how to skate!

It is easy to be convinced that the result of an athlete is often determined by the head, and not by the legs, by observing the performances of debutants, from whom, as a rule, no one expects feats. The most striking impression of the male "single" at the World Championships in Stockholm was the debut of Yuma Kagiyama among adults (second place after two-time Olympic champion Yuzuru Hanyu in the short program and second place in the free program after three-time world champion Nathan Chen). And at his first stage of the current Grand Prix in Turin, the Japanese miserably failed the short program, where he took seventh place, failing to cope with the quadruple salchow and sheepskin coat in a cascade. But for these two elements, Kagiyama scored almost thirty points in the short World Cup 2021 - 0.96 more than Hanyu was awarded for the same set of jumps.

Similar ups and downs have happened in figure skating at all times, and most strikingly - just in men's single skating due to a fairly large number of multi-turn jumps. Here is just one example: in 1995, the future Olympic champion Ilya Kulik won the European Championship in Dortmund, where he played as a junior, and outstripped Alexei Urmanov, who became the first at the Olympic Games in Lillehammer, in the fight for gold. And a year later, at the European championship in Sofia, Ilya tore off everything that was possible in an arbitrary, and was included in the number of participants in the world championship only after an additional selection. As a result, at that championship, he became the second. About the same swing happened with Kulik at his first junior world championship, where the guy skated the short program perfectly, and flew to 11th place in the free program.

There are similar pages in the biographies of even the greatest (Chen and Hanyu are no exception). The only question is whether an athlete is able to learn to take a punch, or failures at the most crucial moment become systemic for a person. But here's the paradox: despite the fact that in Sochi all three Russian singles skaters failed in the short program, having broken two jumping elements out of three, it is simply impossible to call the defeat of Evgeny Semenenko or Mark Kondratyuk a systemic failure: the experience of both skaters on the big ice is too small. ...

By Saturday, the fans, like the journalists, had already come to terms with the fact that Semenenko most likely would not be able to qualify for the Grand Prix finals, like Mikhail Kolyada, although in fact both retained the chances to still be in the first world six.

Just to do this, Mikhail needed to win back more than ten points behind the leaders, and Eugene - almost 15.

Unfortunately, there were no big shocks with a plus sign.

Kondratyuk honestly tried to show everything that he can in the free program, namely, three quadruple jumps, but to some extent became a hostage to the declared difficulty: instead of the first quadruple he made a butterfly, actually broke one of the spins, got the second level of difficulty for the step sequence and in overall did not even come close to making the impression that he was capable of.

Semenenko turned out a little better (three quads in the program, touching the ice on a quadruple salchow, falling from a triple axel, touching and step-out on a triple flip).

In the morning workout, the skater slightly pulled his neck, as he said in the mixed zone, but this was certainly not the reason for the mistakes.

Three quads failed and Kolyada - only a sheepskin coat came out, which was in the second half.

But in general, Mikhail coped with his task: he scored 92.52 for technique and, taking into account the second mark, which is traditionally high for a St. Petersburg skater at any rental, he showed the best result in an arbitrary.

Another thing is that the sum of the two rentals was not high enough to bypass Maurice Kvitelashvili.

He tore off one quadruple out of three, lost an arbitrary not only to Kolyada, but also to Matteo Rizzo, but in general turned out to be luckier than his rivals.

The Italian, in fact, became the only one who provided a wow-effect in arbitrary rental, despite the fact that in terms of the technical richness of the content with one quadruple jump, he was much inferior not only to Kolyada and Kvitelashvili, but to four other opponents. Rizzo's speech could well have been presented as a masterclass on the topic: "How to enjoy the rental when all is lost." The reaction of the tribunes was also eloquent. The famous coach and in the past one of the strongest singles in the world Anna Levandi (Kondrashova) noted that Rizzo's rental caused delight even among those who do not understand figure skating deeply.

“Most untrained viewers are generally unable to distinguish a quadruple jump from a triple jump.

But the feeling is “Wow!

familiar to everyone, ”the specialist emphasized.

As a result, the skater, who had the ninth result in the short program, took the lead before the strongest warm-up, leaving behind first Semenenko, then (already from among the participants in the strongest warm-up) workshop veteran Michal Brzezinu and American Kamden Pulkinen.

Roman Sadovsky almost flew there (from the Italian attack, the Canadian was saved by the backlog he received in the short).

In relation to Semenenko, this alignment was doubly offended.

Evgeny not only lost his chance to get to the final: the level of all the participants of the stage, without exception, allowed the second ward of Alexei Mishin to fight them.

Eugene's free program really had the opportunity to become a decoration of the tournament, but, alas, it did not.

In general, the men's tournament, which before it began, was seen as a completely accessible opportunity for Russian participants to occupy the entire podium, but in reality were left without medals and the final, suggested only one thought.

Probably, it's time to just stop making predictions and try to calculate in advance which of the contenders for a place in the Olympic team is capable of showing their maximum in Beijing, or, at least, not letting the team down.

You just need to wait for the Russian championship and take its results for granted.

And hope for the best.

In the meantime, it remains only to rejoice for Kolyada, who became the only representative of the country in the Grand Prix finals.

He will be accompanied there by Yuma Kagiyama, Shoma Uno, Vincent Zhou, Chen, and Jason Brown.