"Hockey is a simple game, isn't it?": Ovechkin scored a hat-trick and became the first star of the day in the NHL

Alexander Ovechkin scored a hat-trick in the NHL regular season match with Florida and was named the first star of the day. The forward came second in the sniper and scorer races and came close to Leon Dreiseitl from Edmonton. In the list of the most productive players in the history of the league, the Russian climbed to 26th place, ahead of Guy Lefleur and Brandan Shanahan. 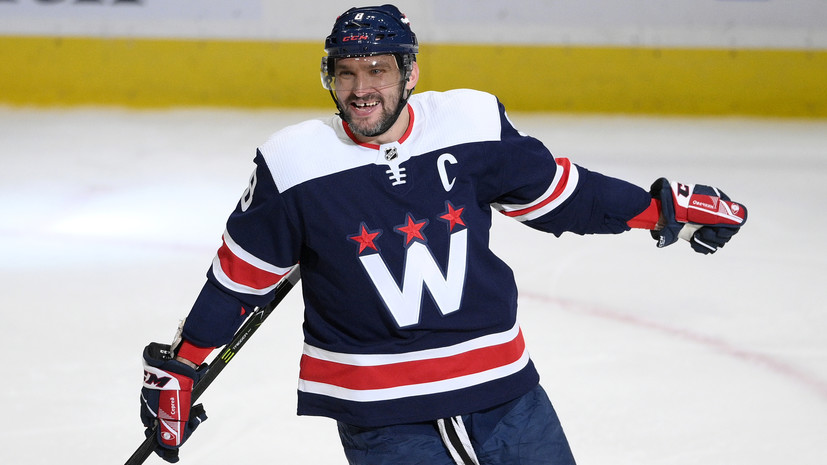 The Capitals hosted Florida this time.

The Russian scored the first hat-trick of the season and brought the team a 4: 3 victory over the leader of the Eastern Conference.

The meeting began not in the most pleasant way for the captain of "Washington".

In one of the episodes in the first period, the puck bounced into Alexander's face as a result of a series of ricochets after the throw of the ex-defender of the capital's Radko Gudas.

The Russian even had to go to the locker room for a few minutes to catch his breath.

As Ovechkin noted after the match, in the under-stands room he checked whether all the teeth were in place.

For me, this moment became like an alarm clock, ”the forward admitted.

The fans saw the first puck performed by the captain of the Capitals at the beginning of the second period. Washington ended up in the majority after Joe Thornton was sent off. Ovechkin could not but take advantage of such a gift. The striker played well on finishing moves after the throw of Tom Wilson. Alexander scored the 273rd goal in unequal lineups and reduced the gap in this indicator to Dave Andreychuk, who holds the league record (274).

The striker kissed the puck heartily and struck the guests' goalkeeper Spencer Knight.

The American was replacing Sergei Bobrovsky on the ice, who at that moment was undergoing a test protocol associated with symptoms of concussion.

Thus, the meeting with Florida was the 153rd in Ovechkin's career, when he scored more than one goal.

Another such fight, and the forward will catch up with Mario Lemieux (154), who is in third place in history for this indicator.

The Russian scored another goal in the third period after a gross mistake by the Panthers.

The guests left the leader of "Washington" alone on the heel, and he naturally took advantage of the situation.

Florida striker Jonathan Huberdu lamented after the match that his team was so unsuccessful against Alexander.

“We had no right to leave Ovechkin alone in front of the gate.

He puts all his strength into the throw.

He is an incredible scorer and a great player.

And today he demonstrated it in the match against us.

Of course, we had to play more closely with him, "the official website of the NHL quotes the Panthers player.

The hat-trick was Ovechkin's 28th in his career.

According to this indicator, he caught up with Marcel Dionne and Bobby Hull.

According to the specialist, the meeting with Florida became a vivid example of how the Kuznetsov-Wilson-Ovechkin troika can attack.

Kuznetsov played an important role in this, while Ovechkin acted in the usual way and created many chances in the attack.

It was an important match, and the cool play of the leaders who came to the fore was very useful to us, ”the specialist noted.

According to the forward himself, he just continues to do his job and it brings results.

“If I have the opportunity to shoot at goal, then I shoot.

If I can pass, then I pass.

It should be noted that Florida is quite a convenient opponent for Ovechkin.

He has scored 43 times against the Panthers in his career, including three hat-tricks.

Before Wayne Gretzky's record in the list of the top scorers of the regular season in the history of the league, the Russian has 146 goals, and only 18 goals to the third place of Jaromir Jagr.