Elected as Executive Vice President of ITTF, "The Fat Man Who Doesn't Know the Ball" has been promoted again 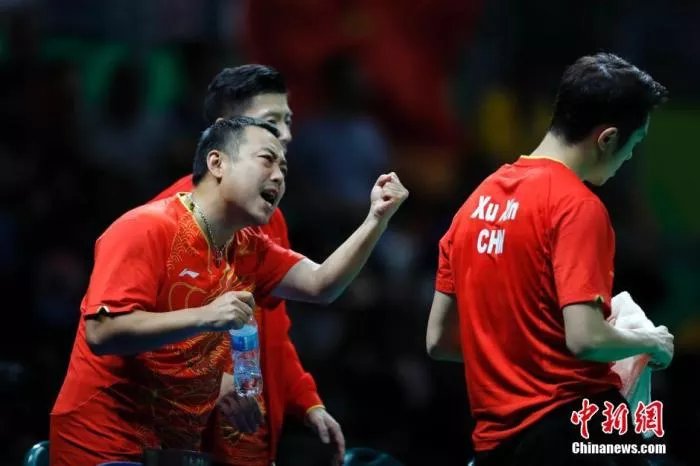 Once the news was released, it caused heated discussions among the majority of national table tennis fans.

Everyone sighed: Congratulations to the fat guy who doesn't understand the ball!

Talking about the origin of this nickname, it can be traced back to the 2016 Rio Olympics.

A Taiwanese netizen left a message on social platforms and said, is the fat man behind an official?

It seems that he didn't understand the ball the whole game.

In this way, Liu Guoliang, who has made great achievements both as a player and a coach, has since gained a nickname-"the fat man who doesn't understand the ball."

Of course, ridicule belongs to ridicule. In recent years, Liu Guoliang has indeed made considerable contributions to the development of world table tennis.

Chinese and American partners appear on the field

And just a few days ago, the news that Chinese and American players competed in mixed doubles across the country has aroused strong reactions.

The ITTF announced on the evening of the 21st local time that Chinese and American players will be paired across the border to compete in the mixed doubles competition at the 2021 Houston World Table Tennis Championships.

Since then, these two pairs of players have also made a good start in the World Table Tennis Championships debut.

It is worth mentioning that this year marks the 50th anniversary of China-US "ping-pong diplomacy".

At this point in time, the brand-new transnational partner seemed to bring back the memories of the Chinese people 50 years ago, and I couldn't help but recall the story of "the small ball turned the big ball".

"We have been thinking about how we can build on the solid Sino-U.S. friendship established by our predecessors and further enhance the friendship between the two countries through sports events, sports activities, and non-governmental activities." Liu Guoliang expounded the beautiful original intention of the Sino-US cooperation in this way.

Data map: A group photo of the American table tennis team with Chinese personnel in 1971.

At the joint training ceremony of the Sino-US mixed doubles combination, he said that in addition to the gold medal, sports itself is more about spiritual communication.

Liu Guoliang himself picked up the racket again. He wore a suit and played against the US Table Tennis Association chairman.

His movements are naturally not as agile as he used to be on the field, but the significance of such competition has surpassed the game itself.

In fact, before he was successfully elected as the Executive Vice President of the International Table Tennis Federation, Liu Guoliang was also committed to the exchange and spread of table tennis while helping the national table tennis defend its dominance.

In 2020, Liu Guoliang was successfully elected as the chairman of the World Table Tennis Professional League Council. After that, the Chinese Table Tennis Association and the ITTF worked closely to host a series of important events such as the Men's and Women's World Cup and the ITTF Finals in China.

This has also set an example for the restart of world sports events during the epidemic.

In the group photo taken by the team members, everyone's faces were filled with happy smiles.

Liu Guoliang said that he

has always advocated "Chinese table tennis, shared by the world"

After co-training with the Chinese team, the players have made great progress in their skills and tactics. Such training is a good platform for understanding the sport of table tennis and promoting cultural and intellectual exchanges from all over the world. .

Many people don't know that Liu Guoliang had the opportunity to run for the new president of the ITTF. This is undoubtedly a win-win situation for him and the development of Chinese table tennis.

But running for ITTF president requires complicated and tedious preparatory work, and this preparatory process coincides with the time for the Chinese team to prepare for the Tokyo Olympics.

In order to defend the honor of the national football, Liu Guoliang gave up this rare opportunity.

And his "house", in exchange for Guoping's satisfactory answer of 4 gold and 3 silver in the Tokyo Olympics.

The picture shows Liu Guoliang clashing fists with the coach of the Hong Kong team.

Liu Guoliang has been promoting the development of table tennis all the way.

At the Tokyo Olympics, Liu Guoliang invited the Hong Kong team to take a group photo after the match, which is still fresh in my memory; and when Xu Xin was elected as the vice chairman of the Asian Table Tennis Federation, Liu Guoliang sent sincere blessings to his lovers, "This is China An important signal from the Table Tennis Association to the world table tennis arena to allow young and influential champion players to work in international organizations."

"Chinese table tennis is shared by the world", this is the slogan that Liu Guoliang put forward when he was elected chairman of the Chinese Table Tennis Association.

Now, his temples are a little pale, and he is still working hard to let these ideas fall.

After the successful election, this original intention will continue to shine on the international table tennis platform.

I hope this "fat guy who doesn't understand the ball" can make table tennis bring health and happiness to more people through his own efforts.