3 matches to determine the positions of the League Cup

Today, the second round of the matches to determine the positions from the ninth to the 14th in the Football League Cup competition will resume with three matches, as Al Dhafra meets Sharjah at 18:00, Al Orouba meets Bani Yas at the same time, while the UAE faces Khorfaka 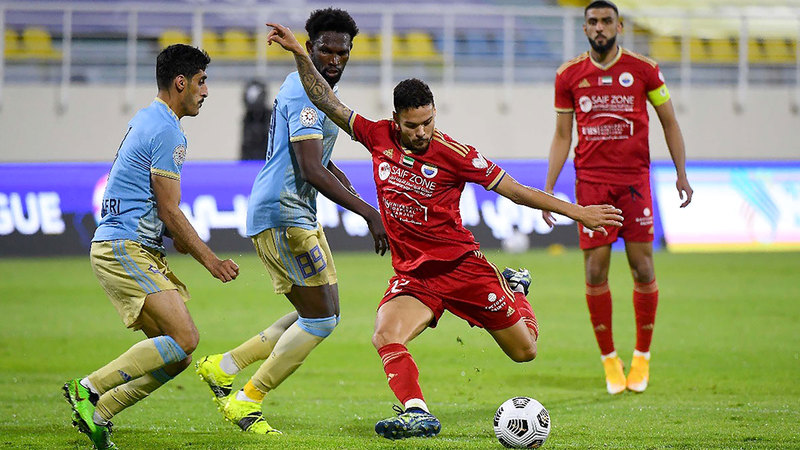 Al Dhafra faces Sharjah with substitutes.. and a first confrontation between the Emirates and Khor Fakkan

3 matches to determine the positions of the League Cup

Sharjah and Al Dhafra want to give the opportunity to a large number of substitute players.

Today, the second round of the matches to determine the positions from the ninth to the 14th in the Football League Cup will resume with three matches, as Al Dhafra meets Sharjah at 18:00, and Al Orouba meets Bani Yas at the same time, while the UAE faces Khorfakkan. At 20:15.

Al Dhafra team receives its rival Sharjah in a confrontation that the owners of the land are playing with substitute players to give them the opportunity and check their readiness before resuming the league competition next month.

The Brazilian coach, Rogerio Micale, said in the press conference that he wants to win all the matches, but sometimes he wants to give the substitutes a chance.

On the other hand, the Sharjah team, under the leadership of the new Romanian coach, Olario Cosmin, is looking forward to achieving positive results, after the "king" had won the coach's first appearance at the expense of Khorfakkan 3-1, and it will be the responsibility of the team's players to double their efforts, Especially since coach Kuzmin knows that he does not accept shortcomings.

Khalid bin Mohammed Stadium in Sharjah Club will host the Khorfakkan match with the Emirates, and the two teams are looking to win to occupy a good position, in addition to continuing to test players who did not have the opportunity to play in the ADNOC Professional League matches to determine their technical readiness.

The Falcons are looking forward to achieving a third victory in the tournament, especially after they beat Al Ain in the first round with a clean goal, and with the same result, they beat Al Oroba, which will help them get closer to getting the best positions in the current stage of the championship, and to spread the culture of winning among their players.

Khorfakkan is playing the match with an eye on stopping a series of three consecutive losses suffered by the team, two of them in the League Cup with Al Wahda with a clean goal, and Sharjah (2-1) and (3-2).

The two teams have never met in the professional league, which gives the match another technical impetus to achieve the first victory between them, before returning to the league competitions.

Al-Uruba will host its counterpart Bani Yas, and it is the second direct match that brings the two teams together, after they had previously met in the last round of the ADNOC Professional League, and Al-Samawi managed to win two goals without a response.

And the technical staff of Al-Arabiya seeks to exploit the matches of the Professional Cup to prepare the players, especially in the period when the league competition was suspended due to the circumstances of Al-Abyad’s participation in the Arab Cup competition.

Al-Uruba coach, Fathi Al-Obaidi, said in a press conference: “The technical staff has many goals that it seeks to achieve against Bani Yas, the most important and most important of which is correcting the mistakes that the team made in the last league match, and re-equipping some of the players, most notably Saeed Al-Rawahi and Kaka, who They did not participate in the first match against Baniyas due to the suspension.

He added, "This match also falls within the technical staff's preparations for what is to come, specifically for the resumption of the league, which will witness the establishment of a number of compressed matches within a short period that requires that we have the largest number of ready players in anticipation of the conditions of suspensions or injuries."

Al-Uruba suffers in terms of the league competitions, despite the remarkable levels it presented in many matches, as the team has never achieved any victory, tied in four matches, and lost in six, to occupy the penultimate position with four points.