"The Russian car never breaks down": Ovechkin scored an assistant hat-trick against Montreal

Alexander Ovechkin gave three assists in the victorious match with Montreal (6: 3) and secured his third place in the list of the top scorers of the season in the National Hockey League. In 20 games, the Russian forward scored 33 points and rewrote his own 2008 achievement. Such performance at the start of the regular season has never been achieved by any Washington player in history. According to the head coach of the team, Peter Lavioletta, the captain did not start shooting less, he just understands the game well and makes the right decisions. 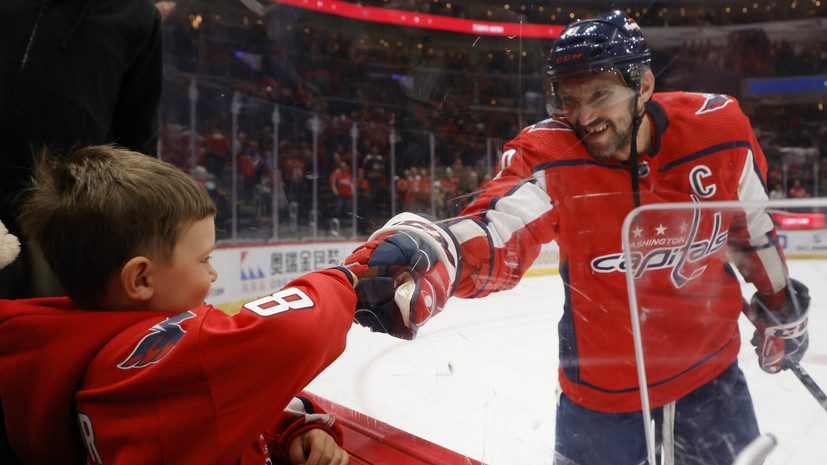 Forward "Washington" Alexander Ovechkin continues to churn out records in the NHL - another achievement was set in the match with "Montreal". The Canadian team does not shine this season, disappointing their fans with a streak of defeats. In 20 meetings before the reporting game, the Canadiens celebrated victory only five times. In turn, for the Capitals, the home meeting with the 2021 Stanley Cup finalist was an excellent opportunity to rehabilitate themselves for a bad visit to Seattle, where they managed to lose to one of the league's outsiders with a score of 2: 5.

On their ice, Peter Lavioletta's charges sent six goals into the gates of Montreal. More this season, "Washington" managed to score only in the match with "Ottawa" (7: 5). Naturally, Russian stars of the National Hockey League took an active part in the victory over the Canadiens. The captain of the "Capitals" this time he could not score, but chalked up three assists.

The account was opened in the 4th minute by Nick Daud after an assists pass by Dmitry Orlov.

Alexander fought at the far post, and Evgeny Kuznetsov and the American played a simple combination, which ended with an accurate long-range throw from the defender.

In the middle of the second game segment, Kuznetsov himself distinguished himself in a mocking style - Ovechkin moved away from the gate and passed on to Carlson, the American shot to the far post, where Eugene could simply substitute the stick, but the forward calmly accepted the puck and brought it into the goal.

The striker, by the way, retains the chances to go to the Olympic Games in Beijing.

As the head coach of the Russian national team Alexei Zhamnov says, FHR is in dialogue with the international federation about reducing the period of Kuznetsov's suspension.

At the very beginning of the third period, Lavioletta's team got a two-to-one exit.

Together with Ovechkin, Tom Wilson rushed to the other's gates.

The Russian who owned the puck waited for the right moment and made a pass to the Canadian, who was in a more favorable position for the throw.

As the coach of "Washington" noted after the match, this decision of the team captain was somewhat unexpected for him.

“Based on the fact that the puck was on Ovechkin's stick, it was easy to assume that he would score.

So on the part of Alexander we saw a really good, disinterested, correct game.

He gave the transfer to Tom, who was opened, ”- the official website of the NHL quotes Lavioletta as saying.

The last in the hosts' lineup in the 45th minute was Dmitry Orlov, who threw the puck on the patch, where it hit Chris Wideman's skate and ricocheted into the goal of Jake Allen.

Daud, Carlson and Ovechkin were recognized as three stars of the match against Montreal.

The assistant hat-trick has become the first for Alexander since February 2018, if we take into account the regular championships.

However, the Russian himself did not see anything unusual in this result.

“Has anything changed in my game?

I just made a pass to Kuza, and he gave the puck to John for a shot.

Then I passed to Carlson, and he passed to Zhenya.

The usual thing, minor passes ... The main thing is when you play correctly in the majority and in equal compositions.

You work for the team, you score goals, you give passes.

Anything will do, ”Ovechkin said.

This made him 27th in the league, following the result of five-time Stanley Cup winner Guy Lefleur.

The NHL leader in terms of points is Canadian Wayne Gretzky (2857).

To break into the top 25 of the bombing rating, the Russian has 16 points left, and the closest goal for Ovechkin will be the result of Brandan Shanahan (1354).

If we talk exclusively about assists, then Ovechkin made more than 50 assists four times in one season.

According to the total indicator among Russians, Alexander is in fourth place (608), behind only Sergei Zubov (619), Evgeny Malkin (680) and Sergei Fedorov (696).

According to Lavioletta, the captain of "Washington" did not begin to shoot less on goal himself, he simply began to find the right solutions more often.

It's not that Ovi can't score today ... But in hockey there are times when you need to make the right decision and pass it better.

It is not always necessary to throw, and Ovechkin himself understands this well, "said the Capitals mentor.

In the entire history of Washington, no one has been able to achieve this.

Ovechkin also updated his best achievement of the 2008/09 season.

In the list of the top scorers of the current season, the Russian star is so far inferior to the Edmonton forward duo.

However, the very fact that Ovechkin is at the forefront of the race is admired by experts and fans.

So, the Canadian journalist Brady Trettenero, after the meeting with Montreal, left the following post on his Twitter: “Alexander is 36 years old, and this is his 17th season in the NHL.