Manchester City overturned its goal by a clean goal to win 2-1 against Paris Saint-Germain in the fifth penultimate round of the first group matches in the group stage, in the European Football Championship. 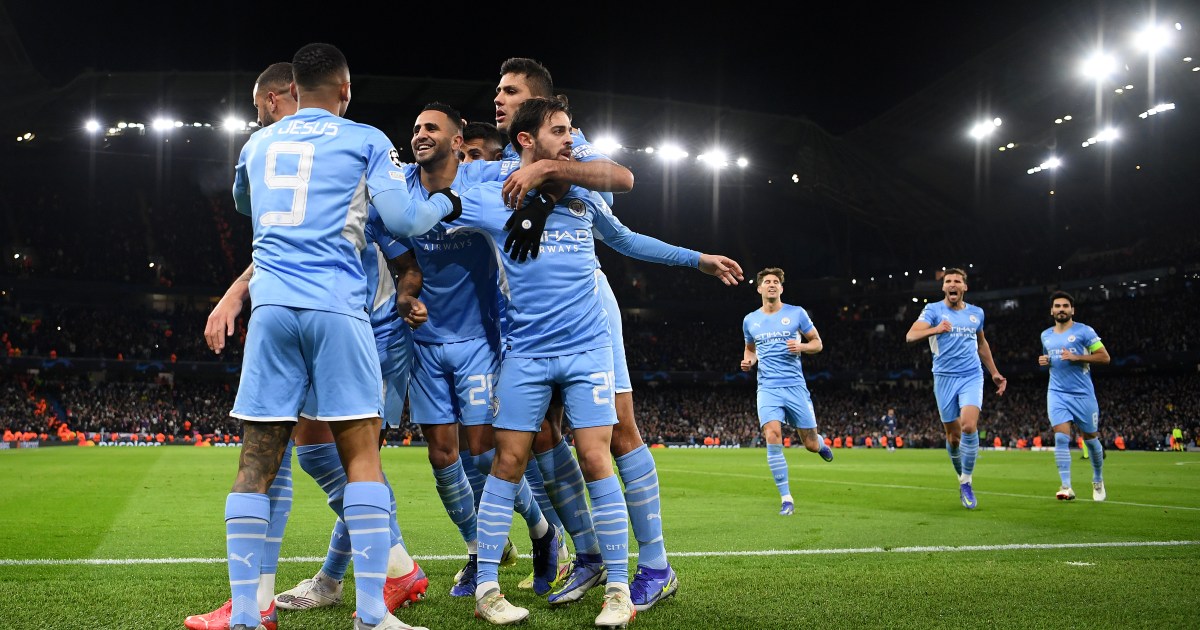 Manchester City overturned its goal by a clean goal to win 2-1 against Paris Saint-Germain in the fifth penultimate round of the first group matches in the group stage, in the European Football Championship.

The two teams qualified together for the final price of the continental championship, with a landslide victory for Leipzig against its Belgian host Club Brugge, by 5-0 in the other match in the group.

Manchester City avenged this victory by defeating Paris Saint-Germain with two goals without a response in the "Princes' Garden".

The "Citizens" consolidated its lead in the group, raising its score to 12 points, 4 points ahead of Saint-Germain, and guaranteed Manchester the top of the group regardless of the results of the last round of group matches, in which Saint-Germain meets with Club Brugge and Manchester is a guest of Leipzig.

Leipzig revived its hopes of moving to the European League after advancing to third place, raising its score to 4 points, with a goal difference only against Club Brugge.

At the Etihad Stadium in Manchester, the two teams failed to score during the first half, ending in a goalless draw.

Saint-Germain was the first to score through Kylian Mbappe (50), and the hosts responded with two goals scored by Raheem Sterling (63) and Gabriel Jesus (76).

In another retaliatory match, but in the fourth group, Real Madrid defeated its host Sheriff Tiraspol, Moldova, by three goals, and joined Inter with Inter in the ranks of the semi-finalists.

Real Madrid - the record holder in the number of times to win the championship with 13 titles - booked a seat in the playoffs of the competition, after taking the lead with 12 points, two points ahead of its closest rivals Inter, who beat Shakhtar Donetsk 2-0 earlier today in the same round. He also qualified for the next round in the competition, which he won 3 times.

With this result, Real, who achieved their fifth victory in a row in various competitions, avenged their 1-2 loss against Sheriff in the first leg at the "Santiago Bernabeu" stadium, the stronghold of the Spanish team.

The Austrian royal team David Alaba (30), German Toni Kroos (second minute of stoppage time for the first half), and French Karim Benzema (55), to continue his hobby of scoring for the fourth consecutive match in the competition, raises his scoring tally in The championship this season to 5 goals.

The match between Real and Inter in the Spanish capital, Madrid, in the last round of the group, became decisive in determining the leader and runner-up of the group, after the two teams secured their qualification for the next round.

From the third group, Sporting Lisbon joined the convoy of qualifiers to the final price with a 3-1 victory over Dortmund, and the same group also witnessed a 2-1 victory for Ajax, its Turkish host, Besiktas.

Sporting Lisbon raised its score to 9 points, to be ranked second in the group, 3 points ahead of Dortmund, who suffered the third defeat in a row in their matches in this group.

Sporting Lisbon ensured that the first round matches finished in second place, regardless of the results of the last round matches, due to their superiority in the direct confrontation with Dortmund.

The Portuguese team scored Pedro Gonzalez (30 and 39), and Pedro Boro (81), while Doniel Malin scored the only goal for Dortmund at the end of the match.

In the second group, AC Milan revived its hopes of reaching the final price, after beating its host Atletico Madrid with a clean goal.

Milan raised its score to 4 points in third place in the group standings, while Atlético Madrid occupies the fourth and last place with the same balance of points.

Junior Messias scored the only goal of the match for Milan (87).

In another match in the same group, Liverpool - who qualified for the final price round - maintained their brilliance in the group stage, achieving the fifth victory in 5 matches he has played so far, this time at the expense of Porto with two goals without a response.

Liverpool raised its score to 15 points in first place in the group standings, while Porto's balance froze at 5 points in second place.

In the next and final round of Group B, Liverpool will host Milan, while Porto will host Atletico Madrid.