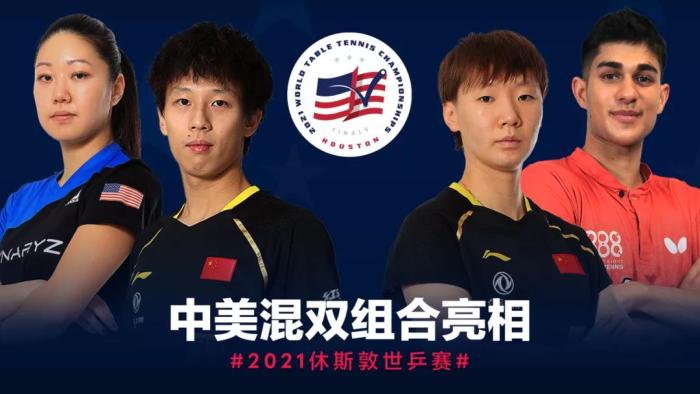 The ITTF Executive Committee finally convened a meeting and approved the request.

The four players in the Sino-US mixed doubles pairing are not only world-class high-level players, but also the younger generation of the two teams, and they have all won impressive records.

Lin Gaoyuan, 26 years old, has an offensive left-handed sideboard and is currently ranked fifth in the world.

In the 2019 World Table Tennis Championships, he broke into the men's singles top 8 and his partner Liang Jingkun won the men's doubles third place.

In the 2021 Houston World Table Tennis Championships, in addition to playing in the men's singles and men's doubles (partner Liang Jingkun), he will also partner with the US women's No. 1 main player Zhang An in the mixed doubles to form a Sino-US transnational cooperation.

As a player who personally participated in the Sino-US matchmaking, Lin Gaoyuan was very excited. He said: "I am very happy to be paired with Zhang An to participate in the mixed doubles competition of the World Table Tennis Championships. Zhang An is the number one on the American team. Our goal is to fight for the first place. "

"The biggest advantage of our cooperation is that she can also speak Chinese. I hope we can quickly get into the shape, cooperate with tacit understanding, and achieve good results through hard work. I hope the fans of both teams can cheer for our two pairs of mixed doubles. This is not only the first match between the players of the two countries, but also a passing of friendship." Lin Gaoyuan said.

Zhang An, 25, has an offensive right-handed cross-boarding style, currently ranked 35 in the world.

She broke into the semi-finals in the 2019 Chengdu Women's World Cup.

Zhang An said: "It is a great honor to participate in the Sino-US mixed doubles match. The World Table Tennis Championships are held in the United States for the first time and to celebrate the 50th anniversary of'Ping Pong Diplomacy'. It is great! I think this will be a historic moment. I’m glad that our two countries can cooperate well through sports. I’m very excited to play with Lin Gaoyuan. It’s great to partner with Chinese national team players. They are the best in the world, so I will try my best, hope We can cooperate very well and achieve good results."

Wang Manyu, 22, has an offensive right-handed cross-boarding style and is currently ranked fourth in the world.

Kanak, 21, has an offensive right-handed cross-boarding style, and is currently ranked 31st in the world.

Kanak won the men's singles bronze medal at the 2018 Youth Olympic Games and is a rising star in the United States in recent years.

ITTF Group Chief Executive Steve Denton said: "We have once again witnessed the unique power of sports in Houston and how table tennis creates dialogue and promotes mutual understanding. This will inspire us to demonstrate an extraordinary and profound experience. A historic World Table Tennis Championship and supports the dreams, hopes and aspirations of the entire table tennis industry and the next generation."

Liu Guoliang, Chairman of the WTT Council and Chairman of the China Table Tennis Association, is a key figure in promoting the China-US mixed doubles match. He introduced: "A few days ago, when the Chinese team arrived in Houston, I saw the ITTF, US Table Tennis Association and Houston during the epidemic. The Sports Bureau’s efforts in organizing events are deeply moved."

“We have been thinking about how we can build on the solid Sino-US friendship established by our predecessors and further enhance the friendship between the two countries through sports events, sports activities, and non-governmental activities. Therefore, the Chinese Table Tennis Association and the United States Table Tennis Association proposed to the ITTF a mixed doubles Sino-US cross-country pairing proposal, allowing these athletes who were friends to play side by side, and fans from the two countries cheered and shouted for them. The new chapter of'ping-pong diplomacy' in the new era is also our most important goal." Liu Guoliang said.

Finally, Liu Guoliang also expressed his expectation to the multinational mixed doubles players: "I look forward to Lin Gaoyuan, Zhang An, Kanak and Wang Manyu, who can play their highest level in this cooperation, and not only have the opportunity to win the mixed doubles trophy. ——Her Dusek Cup is engraved with their names, and at the same time, they can forge a deep friendship and make their own contributions to the promotion and development of table tennis in the world."

The mixed doubles match of the Houston World Table Tennis Championships will be held in the early morning of November 24th, Beijing time.