Washington captain Alexander Ovechkin scored a double in the National Hockey League regular season and helped his team defeat San Jose 4-0. The Russian forward brought the number of goals scored this season to 14, and in his career to 744. After the meeting, he noted the actions of goalkeeper Ilya Samsonov, who issued the second shut-out in a row. According to the Capitals striker, the goalkeepers' reliable play gives confidence to the entire team. 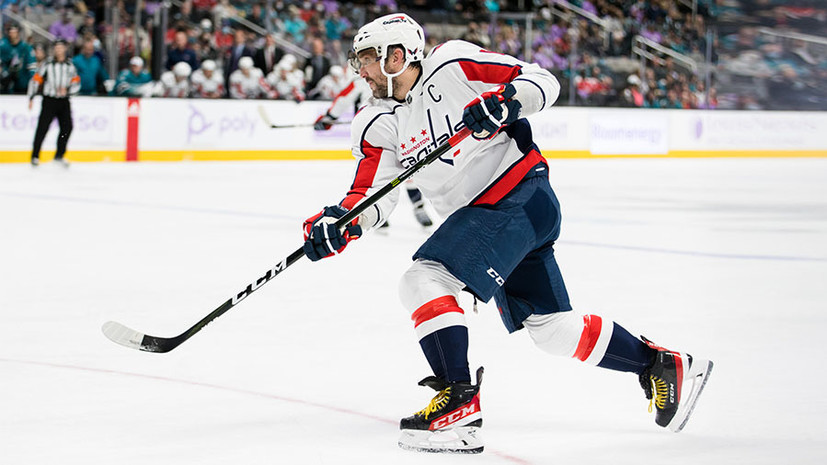 After the shock start of the NHL regular season, Washington forward Alexander Ovechkin took a short break in the bombing race.

The captain of the Capitals has not scored in three games in a row, which is a rarity for the 36-year-old Russian this season: he previously had breaks for no more than one meeting.

But no sooner had the journalists started looking for the reasons for the "silence" of the striker, as he made a double in the game with "San Jose".

Ovechkin scored the first goal in the 14th minute, using his signature one-touch shot from the throw-in circle.

It is interesting that this season the Russian has never scored like that before the match with Sharks.

The goal against Edin Hill was the 272nd for the Capitals leader, scored in the majority.

Before the NHL record for this indicator, which belongs to Dave Andreychuk, Ovechkin has only two goals left.

In the third period, the Russian again forced the fans to follow their actions.

First, he took part in a combination that ended with a labor goal by Conor Shiri, and then scored himself, already at the very end of the meeting, hitting the empty net of San Jose from his zone.

However, after the match, which ended 4-0 in Washington's favor, Ovechkin was not delighted with the team's actions.

At the same time, the captain of the Capitals noted the excellent performance of the team's goalkeeper Ilya Samsonov, who scored a shut-out for the second match in a row.

“Not the most beautiful victory.

We had a good first period, and in the second we let our opponents a lot.

We brought the match to victory, Samsonov played great.

Several shut-outs in a row are good for us.

It's great that we have two good goalkeepers.

If we make a mistake, they'll clean it up.

This is important psychologically, ”Alexander said after the meeting.

However, if this game is forgotten, then the incredible statistics of the Russian will be discussed for a long time.

Ovechkin has already scored 14 goals in the season and 744 in his career.

There are only 22 goals left until the third place in the list of the best snipers of the NHL regular season in history, which is still occupied by Jaromir Jagr.

And, judging by the speed with which Alexander churns out goals, he may soon catch up with the great Czech.

In the sniper race of the season, Leon Dreiseitl took the lead.

The Edmonton forward has four accurate shots ahead of the Capitals captain.

At the same time, Ovechkin topped the list of scorers in the regular season in terms of points scored in full squads.

On account of his already 18 points in the game "five on five".

Another impressive figure - the game with San Jose was 152nd, in which Ovechkin scored more than one goal.

At the same time, talking about his successes, Ovechkin always singles out teammates who help him set records.

“When the whole link is playing well, the puck is usually under your control and chances are more frequent.

It also makes it possible to find more free space in a foreign zone.

We like to play this kind of hockey, and this is the main thing.

In my opinion, now we are just having fun on the ice and enjoying the game, ”the NHL official website quotes the striker.

The excellent performance of the leading link of his team is also noted by the head coach of "Washington" Peter Laviolette.

“Ovechkin is an elite player.

Since training camp, he has been feeling better and better.

He just goes out on the ice and immediately influences the game.

) is now acting with great desire.

He scores goals himself and creates such opportunities for partners.

At the start of the season, he plays at an incredibly high level and deserves no less compliments than Alex, ”the specialist noted.

Ahead of Washington is an away match with Seattle, the penultimate in the Western Conference table.

This means another great opportunity for Ovechkin to score a few goals.

Meanwhile, the Capitals are getting ready for Christmas.

Recently, the marketing service of the club presented a new souvenir: a nesting doll in the form of Alexander Ovechkin.

It is not yet possible to buy a new product.

Only those who purchase two tickets to Washington's home matches in the regular season can become the owners of the souvenir.

A # Gr8 holiday gift sure to take you down memory lane!

Get your Ovi nesting doll and tickets to two Caps games this year while supplies last.