Reason for pride: Mozalev received the best technique mark in the free program at the Grand Prix stage in France

The singles tournament at the fifth stage of the Grand Prix in figure skating ended with the victory of the vice-world champion Yuma Kagiyama. Russians Dmitry Aliev, Andrey Mozalev and Artur Danielyan took the fifth, seventh and tenth places, respectively. However, the 18-year-old student of Kirill Davydenko in the free program managed to become the second, having received the best amount of points for the technique. 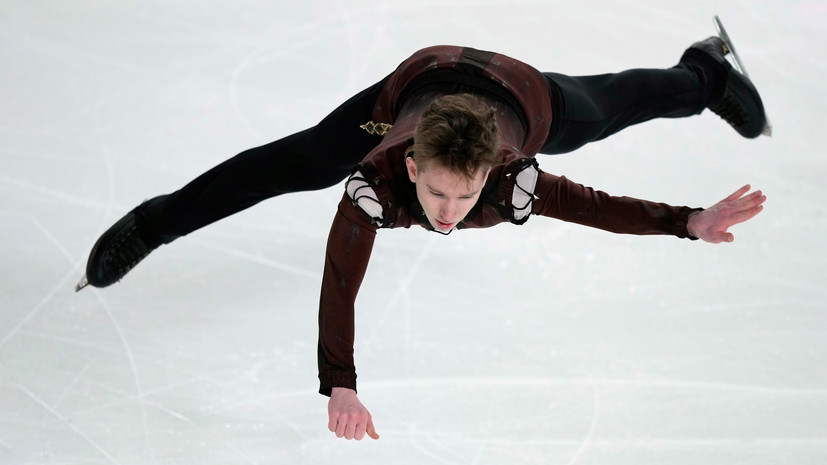 When a protracted, not very effective period arises in a particular sport, the leader is always defined in the same way: he comes and takes his own.

This is how Ilya Kulik, Alexey Yagudin, Evgeny Plushenko appeared in figure skating at the time.

It's just that all these in their own way unique single skaters replaced each other in such a compressed historical segment that it involuntarily seemed: this continuity in Russian men's single skating will always be.

It turned out not.

Since Plushenko essentially ended his career in 2010, the fans have been doing what they hoped for: Artur Gachinsky, Sergey Voronov, Konstantin Menshov, Maxim Kovtun, Mikhail Kolyada, Dmitry Aliev ...

The fact that in terms of their ability to achieve results, none of these skaters are not Plushenko at all, it became clear even from the ease with which Evgeny again climbed the podium, briefly returning to sports, as was the case, for example, at the 2012 European Championships in Sheffield.

Fans still break their spears from time to time over the fairness of Plushenko's inclusion in the Sochi 2014 Olympic team tournament instead of Kovtun, from where the Olympic champion of Turin returned with a second gold medal and a half-collapsed spine.

But let's be honest: what Plushenko did in that team tournament, most likely, none of the then applicants for the only male vacancy could have done.

Since then, the picture has not changed much. The games in Pyeongchang showed not so much the strength of domestic men's skating as its fragility and vulnerability. And all subsequent starts, despite Aliyev's stand-alone victory at the 2020 European Championships in Graz, rather confirmed that reality on the men's ice is far from being as optimistic as it should have become long ago.

Although two years ago it seemed to all of us: the ice is about to break, and Russian singles will reach the level where the cheerleader's sadness is replaced by pride. Simple logic testified that in the clearing, where Kolyada, Aliev, Alexander Samarin, Artur Danielyan are actually competing on equal terms, a qualitative breakthrough was about to occur, especially since Makar Ignatov, Evgeny Semenenko were slowly getting close to this group, Andrey Mozalev. But some had injuries, others more often than necessary let down their nerves, the third for loud victories lacked one or the other qualities.

The current Grand Prix series did not bring any surprises in this regard: at the stage in the United States, Danielyan remained tenth, Semenenko, who won bronze in Vancouver, and the silver medalist of Turin Kolyada, and Ignatov twice became the fourth, were more successful. But as far as the amounts scored for complexity and execution were concerned, all the performances listed were still second-tier, raising a fair question: well, who should we bet on if we are going to fight in Olympic Beijing for the team gold?

Mozalev's free skating, ideal in every sense, at the Grand Prix stage in Grenoble was in this regard an event worthy of attention. Andrey received the absolutely best amount among all the participants for the technique (99.05), ahead of the vice-world champion Yuma Kagiyama by 3.48 points in this component, and Aliyev by 15.12. He also showed an overall second result in an arbitrary box office (179.77), and most importantly, the Russian's performance made me remember that very forgotten formula for success: you just have to come and take your own. And don't care what everyone else thinks about it!

These words, of course, are nothing more than an advance. In the end, taking into account the splashed failed short program (three missed jumping elements, two falls and the final ninth place), Mozalev remained only seventh in the tournament, and his result for a brilliant Saturday skating with three quads and two triple axels was, taking into account the second mark slightly less than Kolyada scored at the stage in Turin for a program with three quads, two of which failed. In other words, Kirill Davydenko's ward has room to grow and to strive for. Unless, of course, you really want it right now, not postponing for better times.

It is also important to understand another thing: the Olympic season is a cruel thing in terms of competition.

Its very atmosphere is capable of making people irreconcilable enemies.

Figuratively speaking, the finish line is always strewn with the bodies of those who wanted to, but could not, did not reach.

You have to step over and go further - to where, as Tatyana Tarasova aptly put it, around you at some point the air ends, but you need to continue to rise.

That is why the feeling that you can is so valuable.

Well, then - grab your chance, decide your fate, and who knows, suddenly, at the right moment, the Universe will smile at you?