Ruud turned to sensational semi in the ATP playoffs

Casper Ruud qualified at the last minute as the first Norwegian for the ATP playoffs in its 51-year history. Today Ruud turned against Andrej Rublev and won with 2-6.7-5.7-6 (7-5) and is sensationally ready for the semifinals. 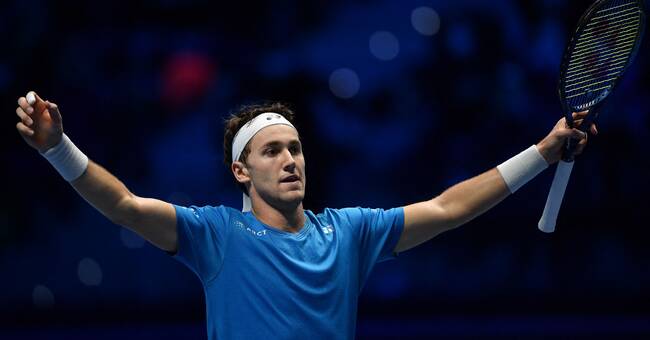 - Rublev hits the ball harder than maybe anyone else on the tour and I hoped to get the chance on the second servers and face his hard blows with equally hard.

I played smart on the important balls, says Ruud in Eurosport's broadcast.

Just like in previous matches, the eighth-ranked Ruud grew into the match and received an increasing dividend on the world five Rublev's second servers.

In the arbitration set, it was even ball for ball and both players looked nervous.

In the tiebreak, Ruud decided on his second match ball which was a serveess.

He walked with outstretched arms and only took in the moment after the first victory against Rublev in the fifth meeting.

Tomorrow in the semifinals, world runner-up and US Open winner Daniil Medvevev is waiting, which he lost to the two times they have met.

- I'm just trying to enjoy the moment and am already looking forward to the match tomorrow.

I have lost to Medvedev, who is one of the best players in the world, and I know about what I need to do.

I sometimes wonder how he gets the balls in and I have to be on top to be able to disturb him, says Ruud smiling in the face of the difficult task to say the least.