For the fifth time this season, Jacob Markström again scored the Calgary goal when Buffalo was beaten 5-0. But the team's surly coach Darryl Sutter was not very impressed. 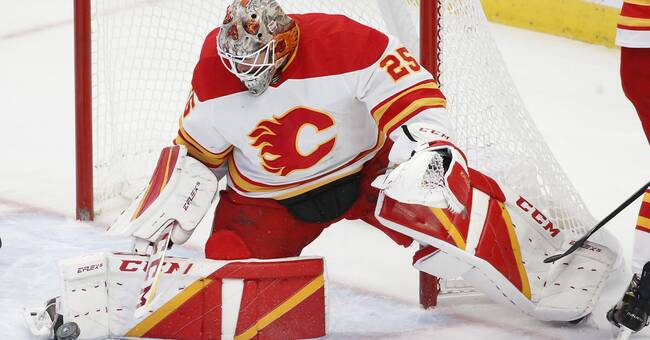 The Calgary Flames can look back on an impressive start to the season, defensively.

Of the 17 matches played, they have had zero goals conceded in six matches.

It's something you have to go back to before World War II to find some equivalent in the NHL.

Jacob Markström has scored in five of the six matches, including the 5-0 victory overnight on Friday against Buffalo.

He may not have been fully booked, with 27 saved shots, but you could imagine a satisfied coaching staff after the effort.

In any case, it was not shown at the subsequent press conference.

- He did not have much work until the third period.

There were very few chances apart from powerplay.

So he did what he had to do, saved pucks and covered shots, Sutter says with a shrug.

"He is a top goalkeeper"

On the follow-up question about what Markström has meant to the team so far, however, he is more positive.

- I think he has been one of our leaders and one of our core players, which is important.

It's not always easy from that position, but he means a lot to the locker room, says Sutter.

Others are more satisfied with Markström's play in the match.

He made some good saves for us.

That's how he is, he's a top goalkeeper in this league, says Andrew Mangiapane.

The lion's share of the match points were scraped together by Johnny Gaudreau (two goals and one assist), Matthew Tkachuk (one goal and two assists), and Andrew Mangiapane (two goals).