Bolshunov's recovery, Ustyugov's victory and the attack of dogs on Kruger: how top skiers prepare for the new season

The leader of the Russian national ski team, Alexander Bolshunov, is gradually gaining shape after undergoing jaw surgery. According to the president of the national federation, Elena Vyalbe, he will miss several races, but will be included in the composition for the Olympic Games. The head of the FLGR also linked certain medal hopes with Sergei Ustyugov, who won the sprint at the preseason tournament in Muonio. Meanwhile, Norwegian Simen Hegstad Kruger was forced to seek medical attention after being bitten by terriers during training. And Johannes Klebo decided to skip the competition in Beitostolen due to a cold and family circumstances. 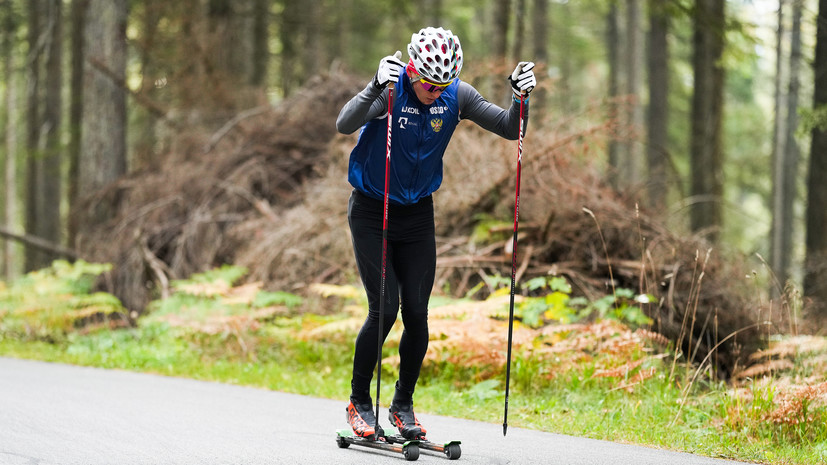 The Russian national cross-country skiing team continues to actively prepare for the new season, which starts at the end of November. Of course, the greatest attention of domestic fans is focused on the leader of the national team, Alexander Bolshunov, who faced health problems. It was reported that after dental surgery, an athlete can miss at least the starting stage of the World Cup. Fortunately, the champion of the planet is rapidly gaining shape.

“The most important thing is to try to get better every day.

Although this year I had difficulties that made it impossible.

In the spring - a fall from a bicycle, then pains in Achilles, and to top it off - problems with teeth.

After the jaw surgery, we planned everything carefully.

Every day we assess the situation, observe how the body reacts to the load, ”said the skier in an interview with the Finnish newspaper Kestavyysurheilu.

According to Bolshunov, during the training camp, he is not in constant contact with the coach of the national team, Yuri Borodavko, and contacts him once or twice a week after an intense training session, and during a personal meeting he discusses all the nuances.

“It is important to trust your feelings and feel the body's reaction to stress.

For me, this is the main indicator, ”added the Russian.

However, in Finland, where Alexander is now, he manages not only to study, but also to enjoy the beauty of the local nature.

For example, he was delighted with the northern lights and shared his emotions with followers on Instagram.

Other Russians are also doing a difficult job.

For example, Alexander Bessmertnykh changed the training group in which he worked for many years, and for the first time is preparing for the season under the leadership of Markus Kramer.

The 35-year-old skier admitted that many things in the German's methods were new to him.

“The most unusual thing is that there are no days off at the training camp.

That is, it lasts 17-18 days, and for the entire time not a single completely free day.

The maximum is one or two unloading, when you conduct one workout instead of two.

I'm used to the fact that there is a cycle: six training days - one day off.

The body already demanded a rest, with every week the fatigue was accumulating, ”the athlete said in an interview with“ Sport-Express ”.

Slowly Bessmertnykh begins to tune in to the Olympic Games in Beijing.

According to Alexander, in China he will stake on the main and, possibly, the only race - 15 km in a classic style.

However, he did not rule out the likelihood of his participation in the relay.

“It starts two days after the cut.

I think there will be the same scheme as in Sochi-2014 - the first two will be taken on the baton by the results of the cut.

Therefore, in any case, you need to tune in to the race, ”added Bessmertnykh.

So, Natalya Nepryaeva stated with satisfaction: she likes her own physical condition this year more than last.

“We always start skiing very late, and for me personally - I can't say for the rest - it suits ... I really hope that the results this year will be better.

But I don’t want to guess yet, ”Nepryaeva said on Match TV.

The only thing that makes life difficult for skiers is the need to be constantly away from home. During the season, they travel from competition to competition, and in the fall they are forced to prepare for a new season in other countries. In particular, the world champion among juniors Veronika Stepanova complained about this.

“Over the past six months I have been at home in Kamchatka for five days.

My life is with me, in a suitcase.

Every second week - moving with new development of the area.

The vacation lasted for a whole week (a stupid question: did I take rollers, sticks, boots and a helmet with me - of course I did and, of course, trained).

On the other hand, ten new countries and hundreds of interesting people in the baggage of impressions during this time, a sense of the growth of their own physical capabilities.

But I wasn’t in a nightclub, I don’t have the strength to wear high heels and an evening dress, and I missed all the fashion shows.

What kind of life would you choose "?

Elena Vyalbe, President of the Russian Cross-Country Skiing Federation, told reporters about the preparation of the Russian national team for the new season this week.

First of all, she shared details about the state of the team leaders Alexander Bolshunov and Yulia Stupak.

“Bolshunov is not yet in a state to show good results.

He will not perform until the end of the week.

Bolshunov has already qualified for the Olympics, this is a coaching decision ... Stupak suffered the coronavirus in July, her plan was adjusted.

She will fly from Davos next week and will be selected for the Olympic Games, ”the functionary said.

According to the head of the federation, the final composition of the Olympic Games in Beijing will be formed in mid-January.

The athletes will have to win a place in it through the profile races at the World Cup.

At the same time, Vyalbe lamented that Russian athletes would not be able to test the Olympic ski track before the Games, and expressed the hope that at least the team's servicemen would be able to visit Beijing.

“Unfortunately, skiers will not have any starts on the track in Beijing.

Like all the other teams, we saw her only in photos and videos.

Although we can imagine what the profile is - long ascents-traction, the same descents, not too high speeds, the relief leaves its mark.

But all teams are in such conditions, I'm talking about athletes, ”she said.

“Although we know that there were representatives of some countries in Beijing who studied snow, they already know what the structure of the skis should be, what paraffins and powders will improve the glide.

Therefore, I hope that our servicers will be able to travel to Beijing in December for the FIS starts with double-athletes, ”added the head of the FLGR.

Vyalbe also spoke about the results of the tournament in Muonio, where the Russian team arrived with almost its full complement and performed well.

Sergey Ustyugov, who won the sprint and took second place in the 15 km freestyle race, was especially encouraging.

“To be honest, I was pleased with the results, although by themselves they do not say anything and do not oblige me to anything.

Pleased with Ustyugov, who did not succeed last season.

I hope we will see him in the best condition, since I have high hopes for Sergei, including at the Olympic Games, ”the functionary summed up.

Klebo's troubles and the attack on Kruger

Other national teams are also preparing intensively for the new season, which also do not go without problems. For example, the team leader Johannes Klebo was forced to interrupt training at the Norwegians. The main reason was a stroke, which was suffered by his grandfather and trainer Kore Hesflot. The specialist had to be urgently hospitalized. In this regard, and also due to a cold, the three-time Olympic champion decided to take a break and skip the home preparatory tournament in Beitostolen. However, he intends to take part in the starting stage of the CM in Ruka.

Fortunately, Hösflot quickly recovered and was soon discharged from the hospital, and his grandson gave him a new large TV.

The athlete explained his act by the fact that now the grandfather, for health reasons, will not be able to travel with him to competitions as often as before, but he will have the opportunity to more closely observe them through the screen.

In addition to Klebo, Olympic champion Maiken Kaspersen Falla, who cited a cold, will not perform in Beitostolen.

However, the organizers of the tournament were faced not only with the refusal of local stars, but also with difficult weather conditions.

In recent days, a strong wind has been blowing in the village, due to which Friday sprints have been canceled.

Another member of the Norwegian national team, Simen Hegstad Kruger, faced a rather unexpected problem.

During a roller ski race, he was attacked by two terriers.

Despite the modest size, the dogs bit the athlete.

According to him, the animals walked without leashes, and their owners could not stop the pets.

He received a tetanus shot and was prescribed antibiotics.

Despite the incident, Simen Hegstad admitted that he loves dogs, although he is afraid of them in training.

Finally, another Norwegian Emil Iversen, on the eve of the new season, complained about the closeness and unsociability of the Russians.

According to the Scandinavian, he only communicates a little with Gleb Retivykh, who knows English.

The rest can pat their opponents on the shoulder as much as possible after the race.

As for the leader of the national team, Bolshunov, he, according to Iversen, does not seem to notice his rivals.

“I would not choose him to hang out in my free time.

But I am very glad to have the Russians as competitors.

They don't let us relax.

We could train half as much and still control the Swedes ”, - quotes the words of the athlete Langrenn.