Against the Russian derby: Ruud beat Rublyov to rival Medvedev in the semifinals of the ATP Final tournament

Andrei Rublev was unable to make it to the semifinals of the ATP Final Tournament in Turin. The Russian tennis player easily won the first set and was leading with breaks in the next two games, but failed to maintain the advantage and lost to Kasper Ruud for the first time in his career. On Saturday, the Norwegian will fight for the finals with the second racket of the world, Daniil Medvedev. 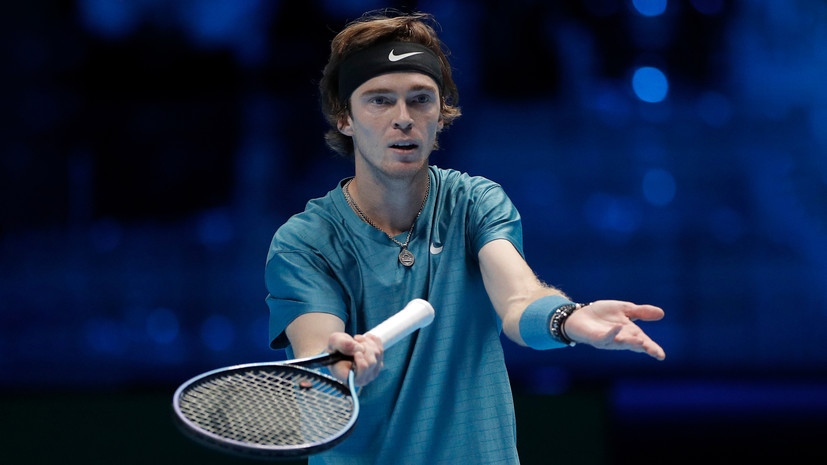 The ATP Finals playoffs are set to kick off on Saturday, but for the two Green Group players, it kicked off the day before.

Russian Andrei Rublev and Norwegian Kasper Ruud in the third round match determined which of them would become the rival of the second racket of the world, Daniil Medvedev.

In their tense fight, the Scandinavian athlete turned out to be stronger.

Before a personal meeting, both players performed in their group in almost the same way.

Both Rublev and Ruud lost two sets to ATP leader Novak Djokovic from Serbia, but both also opened the scoring for their victories in the tournament.

The Russian defeated the Greek Stefanos Tsitsipas, and the Norwegian - the Briton Cameron Norrie, who was called to replace him.

Rublev in the match with Ruud was rightly considered the favorite.

Firstly, there is a certain difference in the rating between them - the Russian occupies the fifth line in world men's tennis, and his opponent came to Turin in the status of the eighth racket of the world.

Secondly, Ruud did not have a positive balance of matches with any of the other participants in the tournament, and beat only Tsitsipas and Italian Matteo Berrettini in his career.

Ironically, both of them did not perform well in the last individual competition of the season due to injuries.

True, Rublev's history of personal meetings with the world's leading players is mostly negative. The only exception was just Ruud. Over the past two years, they have met four times, and the Russian has always celebrated the victory. The Norwegian tennis player managed to win just one set when they just started their confrontation. However, Rublev and Ruud faced each other mainly on clay courts, and they fought on a closed hard for a ticket to the semifinals of the ATP Final Tournament.

In accordance with his status, Rublev played the first game in the same breath. He served well with the first ball, which almost always guaranteed him points - in 12 out of 13 cases he did. Feeling courage, the Russian actively acted at the reception, taking advantage of Ruud's mistakes. After losing the first game, Rublev took the next five in a row. He could have made the third break in a row, he had two set points on someone else's serve, but in both cases the fifth racket of the world had mistakes. But next time Rublev took his game to zero.

The second game also went well for the Russian tennis player at first. He took the lead with a break with a score of 2: 1, but did not keep the advantage. Ruud began to play more aggressively and actively use Rublev's weak second serve. As luck would have it, the percentage of hitting the first ball fell from him, which began to lead to constant problems, and the Norwegian equalized the score.

For Rublev, everything was not lost yet, since Ruud himself did not show miracles in serving, but the Russian could not return the initiative. The exchange of games between them dragged on, and when it was necessary to decide the fate of the set, Rublev suddenly had a failure. One mistake after another led to the Norwegian's triple set point in the 12th game. Ruud waited until Rublev would break one more blow, and equalized the score in the parties. Not only did Rublev increase the number of unforced errors per set from four to nine, but they began to occur at the most crucial moments.

In the decisive game, not a single tennis player possessed any significant advantage.

Rublev managed to be the first to take someone else's serve again, but Ruud's response was instantaneous.

By the beginning of the third hour, the Norwegian was still perfectly attacking from any position, but the Russian had only to fight back.

He coped with this exactly as long as it was necessary to transfer the game to a tie-break.

Rublev spent the last game in such a way that it was difficult to make big claims against him.

He had both actively won rallies, and one successfully won ball, which slipped from the net onto someone else's court.

But Ruud responded with aces or forced the Russian to make mistakes in difficult situations for himself.

He also continued to punish the opponent for a weak second serve.

With this, he earned a two-point advantage for himself, which was enough to win after the exchange of aces.

Ruud did not allow Rublev to play in the first Russian derby in the history of the ATP Final Tournament and himself reached the semifinals against Medvedev. The Norwegian became the first tennis player since 2017 to qualify for the eighth seed group. Rublev did not manage to leave the group for the second time in a row. After the match, he admitted that he was defeated due to the fact that he did not show the same speed as his opponent.

“This is a lesson that will give me experience.

Casper played well, I started playing slower and he was more aggressive.

I thought I was in control of the match.

Each player gets tired or nervous sometimes.

It's part of the sport.

We can say that the moment at the beginning of the second game, when I was leading with a 40:15 break on the serve, became a turning point.

I was pinched even more.

Everything seems to be fine, but it’s back again, it’s hard to pretend that nothing happened.

But even without this moment I had chances in the second, in the third set, "- quotes Rublev" Championship ".