Unexpected decision: Emelianenko replaced Vasilevsky on a short notice before the fight with Santos

Alexander Emelianenko will replace Vyacheslav Vasilevsky in the fight with Marcio Santos, which will take place on November 27 in Syktyvkar as part of the AMC Fight Nights 106 tournament, said the president of the promotion Kamil Gadzhiev. According to him, the fight will be held in an open weight category due to a serious difference in anthropometric data. The 40-year-old athlete himself stressed that he thought about the proposal for about ten minutes and decided to take a chance, despite the lack of a full-fledged preparatory camp. In turn, Vasilevsky's coach Ramazan Ismailov said that his ward was not feeling well and had passed the coronavirus test. 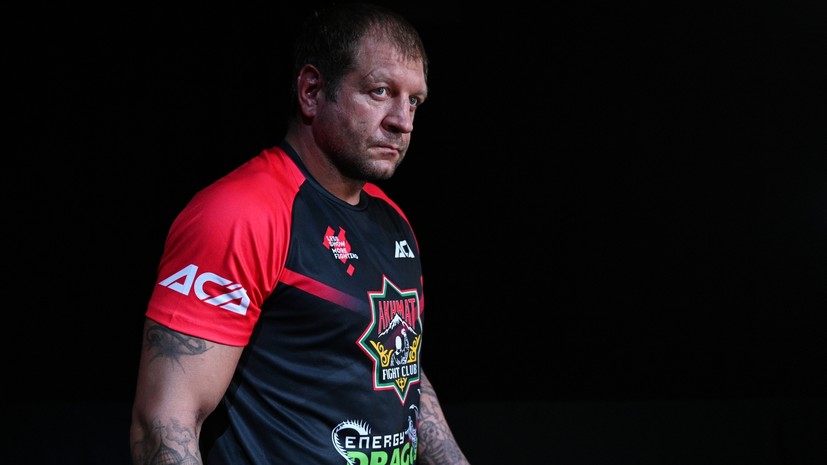 "I feel great and will try to show a bright, spectacular fight"

The news that Alexander Emelianenko will hold the first serious fight at the end of the month after a long pause was a big surprise for all fans of mixed martial arts.

The name of the athlete has recently been more associated with the so-called pop MMA or "freak fights".

The fact that Emelianenko will replace Vyacheslav Vasilevsky and fight with Marcio Santos on November 27 at the AMC Fight Nights 106 tournament in Syktyvkar, the head of AMC Fight Nights Kamil Gadzhiev announced on Wednesday afternoon.

The functionary posted a video on his Instagram page in which he criticized Vasilevsky.

In his opinion, the athlete, less than two weeks before the fight, fell ill with "inflammation of cunning".

“I am surprised by his attitude towards the upcoming fight.

Now it turns out that he started training late, was sick just before the start, and so on.

The day before yesterday he did not show up for an interview due to malaise, but he runs different sections on his Instagram in parallel.

Conclusion: Slava was not going to fight, but, as a real professional, he decided to inform the organization about this in a week, ”Sport24 quotes Hajiyev.

Emelianenko, the head of the promotion, on the contrary, thanked for the consent.

According to him, the confrontation with Santos will be held in the open weight category.

The organizers have no other choice, because the Brazilian usually fights in the welterweight, while Alexander is the heavyweight.

“For Santos, this is not a problem.

It will weigh about 20 kg less, but, on the other hand, it has its own arguments - a good camp.

Emelianenko did not prepare specifically for this fight.

And special thanks to Alexander for this, because he did not ask for a postponement, but said: “I’ll go out and fight”, - quotes Hajiyev's words “Sport-Express”.

The 40-year-old athlete himself admitted that the offer to fight the Latin American came on Wednesday evening and came as a huge surprise to him.

However, it took "no more than ten minutes" to think over the answer.

“Yes, this is a short notice.

Yes, I didn't have a full-fledged MMA training camp.

But I feel great and will try to show a bright, spectacular fight and take over the opponent, "- quotes the fighter" VseProSport ".

And according to the manager of the veteran Azamat Bostanov, it took them even less time to discuss.

“This is an interesting adventure ... We talked for about three minutes, and Alexander agreed.

He is in reasonably good shape.

I went to Tambov for family reasons, so it's hard to call it a collection, ”Bostanov explained.

However, not everyone was happy with the unexpected replacement.

This promotion decision was unpleasant news for Vasilevsky.

Vyacheslav answered Gadzhiev harshly, who accused him of not wanting to enter the octagon.

He stressed that AMC Fight Nights knew about the purulent sore throat that began on November 16.

“He offered to postpone the meeting for two weeks or December 29.

I was told that they would give an answer later.

Then this video came out.

I don’t want to offend Camila, but this is disrespect and unprofessionalism.

Have you ever seen Dana White say after being withdrawn from a fight in the UFC that a person has an inflammation of cunning?

Hajiyev has not passed even the percentage that I am in sports: injuries, preparation, fights.

It is not for him to judge about some kind of inflammation, "- quotes the words of Vasilevsky" Championship ".

The fighter also stressed that he had been preparing for a meeting with Santos for a long time, and it took a lot of effort and money to promote the confrontation.

“Either Kamil does not follow social networks at all, or pretends to be.

He knew that I was in Dagestan, filmed a video with Santos, we were together in Sochi at the fight of Magomed Ismailov.

Why was all this done?

I prepared so much, invested money to say: I will not fight?

His trainer Ramazan Ismailov told a little more about the condition of the ward.

According to the specialist, Vyacheslav did not feel well for several days, he had a fever.

As a precaution, the athlete had to pass a coronavirus test, the result of which is not yet known.

“I don't think it was worth going out like this.

We need to recover and take part in one of the next tournaments, ”the coach explained in an interview with TASS.

A serious contender for the veteran

One way or another, for Emelianenko himself, this confrontation will become a serious challenge and a good chance to prove to everyone that he is capable of performing not only in “freak fights”. Alexander held the last fight in MMA in July 2020 and lost to Magomed Ismailov by technical knockout in the third round, unable to compete with his opponent. After the defeat, the heavyweight disappeared from sight and resumed training only in the spring.

The return took place in September, when Emelianenko faced off against blogger Artyom Tarasov.

That fight rather left big questions.

Alexander failed to knock out an opponent who was significantly inferior to him in anthropometric data, although he knocked down the amateur several times.

In the first round, Tarasov had an advantage at all, while the ex-PRIDE fighter found it difficult to move around the "cage".

It felt like he was far from his best form.

In the person of Santos, the veteran will receive much more serious opposition.

Throughout his career, the Brazilian had 22 fights, in which he won 15 victories with six defeats and one draw.

The Latin American is well known to domestic fans, because the last four times he entered the octagon in Russia.

Moreover, he managed to carry out all these confrontations in just six months, demonstrating the miracles of recovery.

Then, already under the auspices of the promotion of Khabib Nurmagomedov, Eagle unexpectedly defeated Artur Huseynov with a choke hold.

In August, a rematch took place between them, which ended in a draw.

But the most attention was attracted by the meeting of Santos with one of the strongest national middleweights, Alexander Shlemenko, which took place in Vladivostok in May.

The favorite experienced tremendous difficulties and gained the upper hand only by a rather controversial unanimous decision.

To summarize, the Brazilian in Russia has demonstrated himself as an athlete of a fairly high class, and it will be extremely difficult for Emelianenko, who has not fought at a serious level for a long time. As for the serious superiority in weight, it did not help Alexander in the duel with Ismailov, but, on the contrary, prevented him - he looked so hard. In the couple of months that have passed since the confrontation with Tarasov, the veteran was supposed to get in shape, but it is difficult to predict in what condition he will enter the octagon.

However, the athlete has nothing to lose.

A victory over Santos can open a new stage in his career, especially since he does not intend to complete it.

In case of defeat, he can calmly return to pop-MMA and focus on fights with Dzhigan and Vyacheslav Datsik.

In any case, Emelianenko will not be left without proposals.

The management of AMC Fight Nights won the most from the unexpected replacement, because in the person of Alexander it received one of the most popular fighters in the country, who is guaranteed to attract the attention of fans to the event.