"Poorly organized provocation": how the actions of Ukrainian fans nearly sparked a brawl in Bosnia over the Russian flag

Ukrainian fans almost provoked a brawl before the start of the 2022 FIFA World Cup qualifying match in Bosnia and Herzegovina. They displayed an inverted Russian flag, which local fans confused with the Serbian one, as a result of which they tried to break into the neighboring sector. State Duma Deputy Svetlana Zhurova in an interview with RT called this behavior a sign of a low level of education and called on the competent authorities to pay attention to what happened. According to the honorary president of the RFU Vyacheslav Koloskov, UEFA is unlikely to react to the incident. 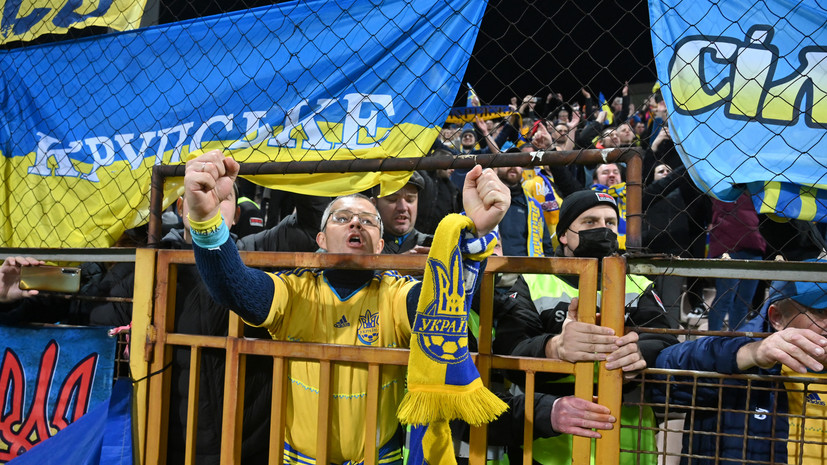 "A misunderstanding occurred before the teams entered the field"

The 2022 World Cup qualifying match between the national teams of Bosnia and Herzegovina and Ukraine was overshadowed by a skirmish with the participation of fans of both teams.

It flared up even before the start of the meeting at the Bilino Pole stadium in Zenica.

The organizers' mistake was the decision to put the fans next to each other on the North Stand.

At the same time, they could calmly move around not the most modern arena.

Such a neighborhood sooner or later threatened to turn into a collision.

The patience of the young people did not last long.

The flag of Russia unexpectedly served as a pretext for the conflict.

Shortly before the starting whistle, the guests demonstrated an inverted national tricolor.

This caused an angry reaction from the owners.

A crowd of several dozen people moved decisively towards the neighboring sector with clearly unfriendly intentions, and a loud whistle rang out over the stadium.

Fortunately, local stewards and police officers, who promptly intervened in the scuffle, managed to put out the passions.

And the fans later managed to explain themselves.

According to media reports, local fans confused the upside-down Russian flag with the red-blue-white banner of Serbia and perceived the guests' gesture as a provocation.

This was later confirmed in an interview with Ukrainian media by witnesses of the incident.

“The misunderstanding occurred at about 21:40 before the teams entered the field and was the main reason that the stands loudly booed the Ukrainian anthem.

The police began to accompany us 70-80 kilometers before Zenica.

They were very afraid of any movement, given the situation in the country with the Serbian fifth column.

They also asked us to refrain from drinking alcohol, but after the match - God himself commanded.

Our torsida was celebrating a victory, ”quotes one of the Football24 fans.

It is reported that the Ukrainians, who almost suffered for their provocative actions, took the tricolor away from domestic football fans in Split, where Russia lost to Croatia at the end of last week.

As for the outcome of the confrontation itself, the neighbors defeated the unmotivated rival with a score of 2: 0 and took second place in their group, which helped them, like the domestic team, to break into the play-offs for the right to go to the world championship in Qatar.

True, in the playoff round, a meeting between the two teams is in any case impossible, since UEFA, for political reasons, divides rivals.

Local fans, known for their hot temper, did not stop at the conflict with the guests and after the final whistle made claims to their own players, who failed the qualifying stage and lost their chances of reaching the final stage of the World Cup in advance.

The athletes had to, guiltily letting go of their heads, go to that very North Stand and listen to the claims.

"If they continue to do this, they will have to regularly receive at all competitions."

In Russia, what happened at the match between Bosnia and Herzegovina and Ukraine was perceived negatively.

The experts agreed that the actions of the neighbors' fans were provocative.

In particular, the Olympic champion in speed skating and State Duma deputy Svetlana Zhurova stated this in an interview with RT.

“First, we are talking about the behavior of uneducated and uncultured people.

In my opinion, desecration and disrespectful actions in relation to the national symbols of another country, regardless of what kind of relationship develops with it, clearly indicate a low level of education of a person, ”Zhurova emphasized.

In her opinion, international football organizations should carefully study what happened in Zenica and think about how to act in such cases in the future, in order to prevent serious conflicts and clashes in the stands.

“Perhaps some bans and restrictions should be introduced.

After all, similar conflicts can continue to flare up.

On the other hand, it is impossible to prohibit people in the stadium from holding the flag of another country, because they can really support it.

But in this case, we got a deliberate story, which means that this is a precedent for the proceedings.

As a result, the incident hurt even the feelings of the Bosnians, who decided that they had raised the banner of Serbia.

And the process of abuse was the culprit, ”added the Olympic champion.

Dmitry Svishchev, her colleague in the State Duma, agreed with Zhurova.

He called the demonstration of the upside-down Russian flag "a poorly organized provocation."

“So they were punished.

Do not dig a hole for another - you will fall into it yourself.

Why did the Ukrainians need it ... They deservedly got it in the face.

There is nothing to insult our state, its flag and coat of arms.

Nobody has the right to do that.

We do not turn over their flag, although it looks like the Swedish one - no one here dares to do that.

Moreover, in Russia, such things are prosecuted by law, "- quotes the words of the deputy Sport24.

He also noted that not the wealthiest people could go to the provocation.

A normal person would not go to such an exit, those who have nothing go.

They went - for this they were punished.

This demonstrates the general situation in the Ukrainian economy, ”added Svishchev.

And the honorary head of the RFU, former vice-president of FIFA Vyacheslav Koloskov, suggested whether there is a chance to draw the attention of UEFA to the incident and achieve the imposition of sanctions on Ukraine on the football line.

“I am not an employee of law enforcement agencies, and therefore it is difficult to say what may happen in the future, and how events will develop.

Let's wait for the reaction of UEFA.

But, in my opinion, the likelihood that they will pay attention to what happened is extremely small, to be honest.

If the match delegate noted in the report that certain rules of the protocol or regulations were violated, the reaction will follow.

If such a record was not made, nothing will happen, ”the RT functionary explained.

Finally, the famous journalist Dmitry Guberniev called the fans of the neighbors, who almost provoked a mass brawl, fools who do not have a written law.

“If they continue to do this, they will have to regularly receive at all major competitions.

Of course, this is karma, there is nothing to even talk about.

The next time something else is turned over, they will receive it again in a different stadium from other fans.

There is such an expression - without stars as without gingerbread.

Maybe they have a motto like this, ”suggested the commentator.