The Sharjah team will host its Khor Fakkan counterpart at 20:15, in the first round of the matches to determine the centers of the Professional Football League Cup competition. 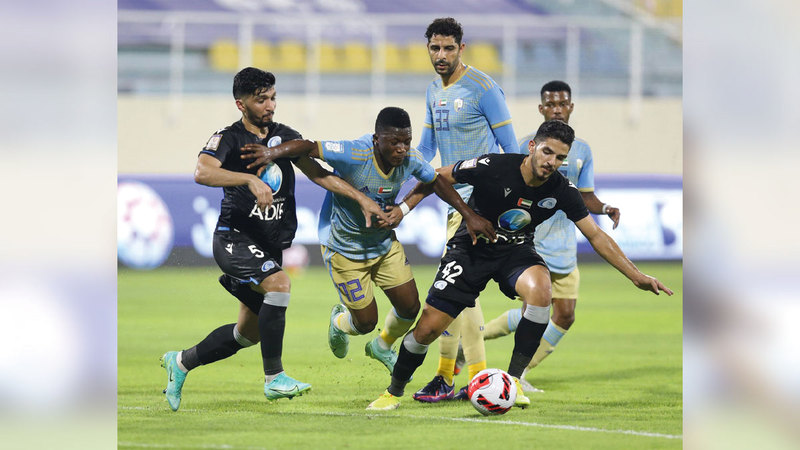 Most notably, the Sharjah and Khorfakkan meeting, in the presence of Cosmin

Baniyas and Al Dhafra hope to benefit from the meeting before the league resumes.

The Sharjah team will host its Khor Fakkan counterpart at 20:15, in the first round of the matches to determine the centers of the Professional Football League competition. The six teams who do not qualify for the quarter-finals will play each other in a league from one round, as each team will play a match with the other five to determine the positions from the ninth to the 14th, while the four teams who do not qualify for the semi-finals will play in the league system from one round to the positions from the fifth Until the eighth, as for the two teams that leave the semi-finals, one match will be held between them to determine the third and fourth places.In the first match, it will be a good opportunity for Baniyas and Al Dhafra to rearrange the cards again before the ADNOC Professional League resumes, as the two teams do not perform the expected performance, while Baniyas collected nine points out of 27 possible and is currently ranked 11th on the league standings. Al Dhafra, on the other hand, continued the fluctuating results, collecting only seven points, and sitting in the 12th place. The owners of the land had bid farewell to the League Cup at the hands of Al-Wasl, losing 1-2 at Al Shamkha Stadium, and falling at Zabeel Stadium in the second leg, 0-2, while on the other side, they left Al Dhafra by falling 1-3 at their stadium at the hands of Al Nasr, and a negative tie in the second leg. In the second match, the Emirates team is looking to heal its wounds in the league at the expense of Al-Arabiya in the League Cup placement match. The team also hopes to correct the path after a number of administrative changes and resignations that the club recently witnessed.The Emirates team had achieved its only victory this season in the League Cup, at the expense of Al Ain, with a goal free of charge. Kalba, before losing to the same team by a clean four.

In a third match, Sharjah is looking for a moral victory to receive the new Romanian coach Cosmin Olario, who was contracted by the club with a two-year contract to succeed former coach Abdulaziz Al-Anbari, knowing that Sharjah bid farewell to the League Cup by Ajman (3-3 at its stadium, and 2 -2 outside), while Khorfakkan bid farewell to Al-Wahda (it won at home 3-2 in the first leg, and lost by a clean goal outside).

Sharjah is playing the match after the big loss against Al Wahda in the last round of the league with three clean goals, so the "king" hopes to appear in a different appearance from the one he recently appeared in, hoping to reconcile his angry fans with the negative results.

It is ranked eighth in the league with 13 points, while Khorfakkan is sixth with 15 points.