Criticism of Kostornaya from Gleichengauz and Medvedeva's debut on TV: what is being discussed in the world of figure skating

Choreographer Daniil Gleichengauz publicly criticized his own ward, Alena Kostornaya. In response, she deleted the post on Instagram with words of gratitude to the mentors. Evgenia Medvedeva and Danya Milokhin delighted the audience in the sixth issue of Ice Age. Alexey Yagudin spoke about the depression he faces on anniversary birthdays. And Tatyana Navka complained about the refereeing lawlessness at children's competitions. What is being discussed in the world of figure skating - in the material RT. 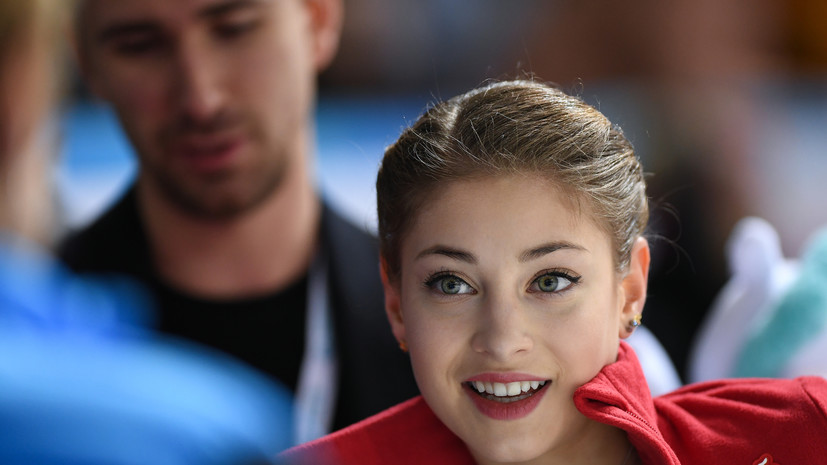 In Russian figure skating, sometimes not a week goes by without another conflict.

This time, attention was drawn to the public criticism of Daniil Gleikhengauz, the main choreographer of the group Eteri Tutberidze, in relation to the ward Alena Kostornaya.

After the end of the Grand Prix stage in Italy, the specialist complained that the European champion did not show her maximum and performed fewer skates than other athletes involved in "Khrustalny".

“Alena posted a very kind sincere post, thanking us for working with her.

If only this was manifested even more not in gratitude on Instagram, but in the training process ... We do not need gratitude, our task is to help her reach the maximum.

And when we succeed, she will show herself in all her glory.

Now this is not her maximum.

I think everyone understands this ”, - quotes the words of Gleichengauz Sport24.

In his opinion, the girl needs to understand herself and understand if there are problems with motivation.

The specialist believes that Kostornaya should devote more time to routine work in training.

“The components have sagged due to the fact that she does not finish the choreography and ligaments to the end.

He does not do all this in full force, because he understands that she is not able to spend more energy in order to reach the end of the program and make all the jumps, ”explained Gleichengauz.

Kostornaya reacted to the choreographer's interview by deleting the same Instagram post with thanks to the group, dated October 31.

Later, the journalists managed to contact Alena, but she did not discuss the disagreement with the mentor.

“Thank you for your support, everything is fine.

I will not comment on this topic ", - quotes the sportswoman" Sport-Express ".

Evgenia Medvedeva and Danya Milokhin continue to enjoy their participation in the Ice Age.

Since the first time they went out on the ice together, they have made serious progress.

In the sixth episode of the show, TikToker and the two-time world champion, according to eyewitnesses, became one of the best and showed dangerous high support.

“It was very scary and fun at the same time.

After her we relaxed a little, relief came.

We were tense, I could see how tense she was, she was like me.

In general… I try to search for words, sometimes I find, sometimes not, ”Milokhin shared his impressions.

The partner also took on the role of a choreographer, putting on most of the dance elements.

The judge was delighted, and Maxim Trankov admired the complex element of the duet.

“I didn't even look at their technicality after their high support.

I didn't care about everything else - I already knew that the technique would be 6.0, and all I had to do was get imbued with the number to appreciate the artistry.

This support was carried out in a non-standard way, even for greenhouses - on the move.

We still have to get up and running like that, ”Trankova Gazeta.Ru is quoted as saying.

Even Tatyana Tarasova, who is usually strict with the participants, was generous in praising the couple.

“I almost fell away right here.

I looked and raised Zhenya.

I raised it calmly to shoulder level.

Then he sat down - once - and squeezed it out.

And even, and well, and did not swing, and set.

And they danced together, and spun, and did it all at the wildest pace, they got high themselves in a terrible way.

And we got high with them!

The choreographer of the Ice Age Maxim Stavisky did not rule out that the already huge attention to the couple could increase if the partners openly kiss on the ice.

“The guys are young, but if Danya has no complexes at all, and will do it with pleasure, then Zhenya will probably find it difficult to do something like that.

In principle, by age, she is already supposed to kiss.

Therefore, if such a need arises, we will ask the guys, and if they agree, we will put the number, "Stavisky admitted.

He also shared the story of his acquaintance with Tiktoker.

According to the choreographer, he left an ambiguous first impression - red nails and hair, piercings.

However, in communication Milokhin turned out to be a "cool guy", and on the ice - a "hard worker".

“I have no complaints or comments about him, he works as best he can and I really like his character.

She and Zhenka suit each other - both are so young, fresh, just a bright ray in our dark kingdom, ”added Stavisky.

The producer of the TV show Ilya Averbukh said that he invited Medvedeva to the project last year, but then she refused, because she had not completely decided on the end of her career.

They, at the invitation of Averbukh, have already tried their hand at the program.

“We trained for three or four days.

We were taught to skate, went with partners, performed all kinds of support, it was very cool.

And then, unexpectedly, a call came from Irina Aleksandrovna Viner.

And now we are in the hall, preparing for the World Championship.

It seems to me that Irina Aleksandrovna did not even know that we would participate in the "Ice Age".

We thought that if we finish, it will be a surprise, ”said Dina.

In turn, Arina admitted that the transition from rhythmic gymnastics to figure skating was not easy, since completely different muscle groups are involved in this form.

“They rubbed calluses, and some other muscles started to work and started to hurt.

We didn't even know about their existence.

We liked it very much, ”the girl admitted.

For Evgenia Medvedeva, the beginning of October was generally eventful.

She not only won the sympathy of the judges on "Ice Age", but also gained a million followers on Instagram, and also made her debut as a TV presenter on Match TV.

Together with journalist Karen Adamyan, she hosted the festive release of the program "All for the Match", dedicated to the sixth anniversary of the channel.

“The feeling is about the same as from the Olympic Games,” the two-time world champion shared her impressions.

There is no talk of going out on the ice yet.

The Russian native of London, along with partner Jonathan Gurreiro, withdrew from the Grand Prix stage in France.

“It is difficult to realize that because of the missing stage, we will not be able to please the spectators and judges with our programs, and we really like them.

But we are not upset and we look forward.

I try to train as much as possible, ”wrote the skater on Instagram.

And Zagorski suggested that the return of the duo is likely to be expected at the Russian Championship, which will be held in December.

According to the Olympic champion, on anniversary birthdays, an unmotivated blues rolls over him, which becomes more and more difficult to cope with over the years.

“In my life I am an unreal optimist, but the numbers“ hit ”very hard.

At 30, I somehow knocked out for a couple of hours.

At 35 it had been going on for several days, and at 40 it lasted two weeks.

I understood that everything was fine with me, but I could not help myself.

It was the number 40 that went down. I have no idea what will happen at 45, ”Yagudin said in an interview with Starhit.

Also, unexpectedly for many, he called himself "a product of rivalry with Evgeni Plushenko."

“Being in St. Petersburg many years ago and training with one specialist, we did not come up with anything.

It's a normal life when you peep, see how they work there, want to do more.

Look at the girls Eteri Georgievna Tutberidze - this is a good sports competition that pushes everyone who works in the group to the records, ”added Yagudin.

Another former Russian figure skater Tatyana Navka complained to subscribers about the refereeing lawlessness she faced in children's competitions.

The daughter of the Olympic champion is also involved in figure skating.

At one of the recent tournaments, the girl took third place and lost to her rivals only because of the lower number of points received for artistry.

"The answer of the judges to the question" Why such an assessment, what needs to be improved or, perhaps, added? "

put us and me personally at a dead end ... I didn't like the dress, and the music, in their opinion, is the PR of my new show.

For a second, the dress is a small copy of Alina Zagitova's dress, with which she won Olympic gold, and the music is a great classic, ”Navka wrote.

She called the decision of the arbitrators biased and emphasized that she saw nothing wrong with the child's desire to imitate the Olympic champion.

PS I have never suffered from the "yazhmat" syndrome, but here it is just some kind of sur ... Even taking into account the fact that I myself went through a lot in childhood, this answer does not fit in my head! "

Meanwhile, the French figure skater Guillaume Sizeron spoke about the development of the conflict with the domestic judge Alexander Vedenin.

The reason for it was the referee's statement about the unconventional sexual orientation of a man.

ISU has launched an investigation into the words of the arbitrator.

However, the athlete stressed that he had not personally filed a complaint against the Russian.

“All this in the end has nothing to do with figure skating.

I think this was a great opportunity for many to react to the opinion of one particular person.

I am very pleased with the support that other skaters and ISU have given me.

For me and all skaters, including Russians, it is important that sport remains a safe place for everyone, "- quotes Sizeron" Championship ".